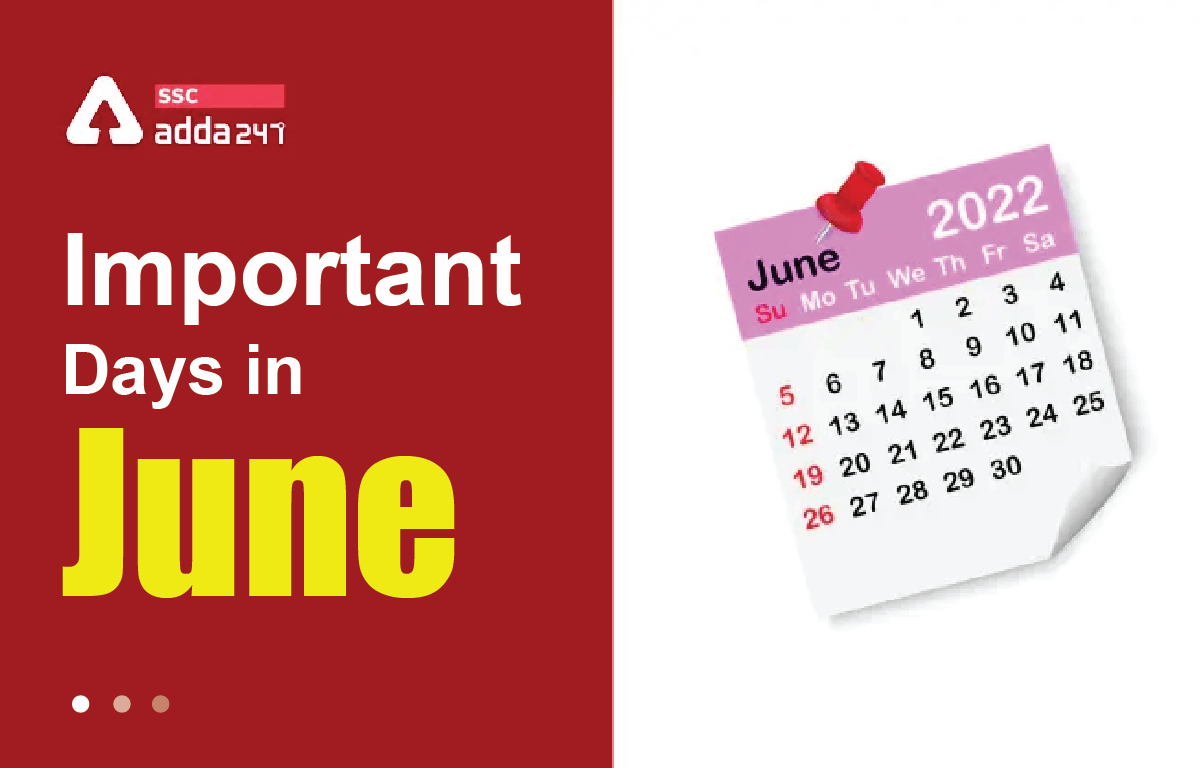 Most Important Days in June 2022: June is the 6th month according to the Gregorian Calendar which is usually followed by the world. This is the second of four months to have a length of 30 days, and the third of five months to have a length of fewer than 31 days. In many parts of India, June marks the beginning of the monsoon season. The important dates are asked in many of the competitive exams in the general awareness section. Candidates preparing for the SSC, Railways, Banks, UPSC Civil Services, NDA, CDS, PSC, and other exam needs proper General Awareness preparation to crack it.

Here we are providing you with the list of the most important days in June for national as well as international events. Candidates just read the detailed table provided below and this will help you to move one step ahead towards your government exam preparations.

Check out the list of National and International Days of June 2022 given below:

Important Days And Dates 2022, List Of National And International Days

We are always asked by our parents to drink milk every day because milk is rich in calcium required for healthy bones. It provides livelihood to many dairy farmers as well. we celebrate world milk day to raise awareness about the milk

Global day of parents is celebrated to honor the sacrifices made by parents to make their children successful.

This day is celebrated to have the attention of society toward the suffering undergone by children around the globe who are the victims of aggression. Thousands of children face domestic violence who have lost their parents

With the passing of every single day, we hear news of global climate change which is going on due to the disturbing ecological balance of the environment

The problem of pest increases in the rainy season as it give rise to a lot of diseases so there are pest organizations that play a very crucial role in guarding public health. This day is celebrated to raise awareness about this

It is very important to eat healthy food and avoid eating at the roadside food stalls as it increases the chances of food infection. This day is celebrated to bring awareness and promote action to help prevent, detect and manage foodborne risks, contributing to food safety, human health, etc.

Anti child labor day is observed to focus attention on the global extent of child labor and the action and efforts needed to eliminate it.

This day is observed to raise awareness of the need for safe blood and blood products for transfusion and of the critical contribution voluntary, unpaid blood donors make to the national health system

India will celebrate the 27th edition of the national reading day on June 19 this year. This day is celebrated in the honor of the father of India’s library movement Puthuvayil Narayana Panicker

This day is organized every year by the United Nations and is designed to celebrate and honor refugees from all around the world.

Yoga is a spiritual practice of ancient India, the importance of which has now been accepted by the whole world. To celebrate this practice and encourage everyone to do yoga more often, 21st June is observed internationally as International Yoga Day.

Medium and small-scale enterprises play a very important role in the growth of the country’s economy. This day is celebrated to mark the contribution made by the MSMSE Sector to the development of the country.

To mark the birth anniversary of Prasanta Chandra Mahalanobis who made their valuable contribution in the field of economic planning and statistical development.

‘The Asteroid Day’ is celebrated on June 30 every year. It is held on the anniversary of the Siberian Tunguska event that took place on June 30, 1908, the most harmful known asteroid-related event on Earth in recent history. The United Nations has proclaimed it be observed globally on June 30 every year in its resolution.

Q1. When was the International Day of Yoga celebrated for the first time?

Ans. The International Day of Yoga was first celebrated on 21 June 2015. Since then it is celebrated worldwide on 21st June.

Q2. When is World Environment Day is celebrated?

Q5. Which day is celebrated on 23rd June?