RRB NTPC Cut Off 2021: RRB NTPC exam is another opportunity by the Railway Board in the interest of govt. job aspirants. The railway has been conducted RRB Non-Technical Popular Categories (RRB NTPC ADMIT CARD 2021) examination in various Zonal Railways and Production Units of Indian Railways for 35208 Vacancies from 28th December 2020 to 31st July 2021. RRB NTPC Exam requires to be explicated to the gunwales so that no interested aspirant lags behind in collecting the much-needed information to prepare for RRB NTPC 2021 exam in the best possible ways. RRB NTPC Cut off 2021 is the minimum qualifying marks that candidates need to score to qualify for the exam and become eligible for the next round of the selection process. The RRB NTPC cut off CBT 1 will release separately for different railway zones and categories.

The below table will show you the RRB NTPC Cut Off 2021 expected for CBT 1 Exam. The 1st Stage examination is conducted for 100 marks. The category-wise cut-off for General, OBC, and SC/ST has been provided below.

The region-wise RRB NTPC cut-off has been provided in the below table.Candidates must check according to their region. 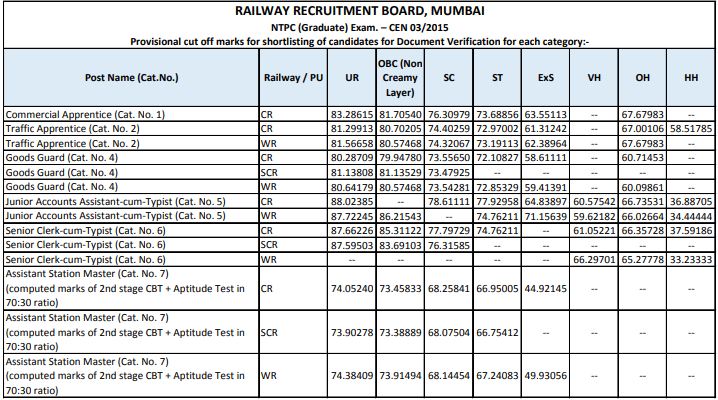 Q. Is the RRB exam tough?
Ans: RRB NTPC exam is moderate as per the reviews of candidates.

Q.What is the salary of RRB NTPC?

Ans:RRB NTPC exam is conducted online by the Railway Recruitment Boards. The exam comprises various stages as per the posts.