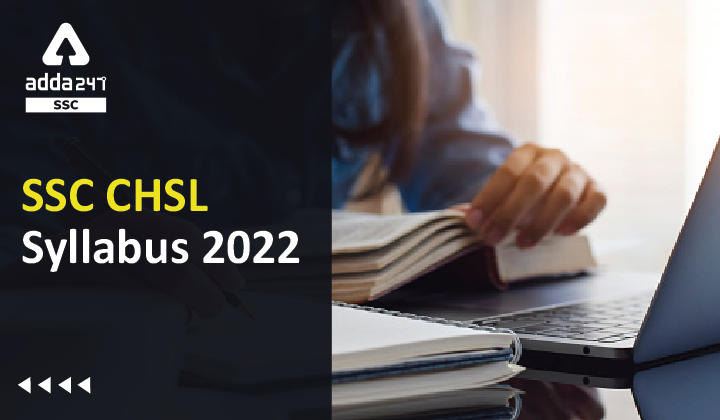 SSC CHSL Syllabus 2022: The SSC CHSL 2022 Notification was released by SSC on 1st February 2022. Candidates preparing for SSC CHSL 2022 must go through the detailed syllabus. The topic-wise detailed SSC CHSL Syllabus has been provided below. The exam is scheduled for 24th May 2022 to 10th June 2022, the candidate should keep updated with all the details related to SSC CHSL and the syllabus is the important thing to start with.

The detailed syllabus for the SSC CHSL examination with important topics for Tier 1, 2, and 3 has been provided in the article below. SSC conducts the Combined Higher Secondary Level (CHSL) exam to recruit candidates for DEO, LDC, and Postal Assistant posts. To surpass the competition with high marks, one must be aware of the SSC CHSL Syllabus 2022. SSC CHSL exam consists of 3 Tiers namely Tier 1, Tier 2 & Tier 3. Here is the complete description of Tier 1, Tier 2 & Tier 3 Syllabus, and SSC CHSL exam pattern with important topics.

Candidates must go through the details tabulated below regarding the SSC CHSL Syllabus 2022. The commission has released the official notification on the official website i.e. ssc.nic.in.

The SSC CHSL exam is held in 3 stages called (Tiers) in which the first is online and the next two are offline exams. The selection process has been table given below: Candidates must go through the details to avoid confusion related to the selection process.

Lakhs of undergraduates appear for the prestigious posts under the SSC CHSL exam dates, and the competition is getting tough with each passing day. SSC CHSL exam is conducted in 3 tiers, and candidates need to clear all the stages to get selected for multiple posts in the Government Offices. SSC CHSL Tier 1 is an Objective Multiple Choice Question paper, Tier 2 exam is a Descriptive Paper in English/Hindi, while Tier 3 is the Computer Proficiency Test.

The SSC CHSL Tier 1 is the first step towards success where candidates will be appearing for 100 questions competing against lakhs of candidates. As per the Latest SSC CHSL Syllabus, Candidates will be given 100 questions from 4 subjects; General Intelligence and Reasoning, General Awareness, Quantitative Aptitude, and English Comprehension to be attempted in 60 minutes. The marking scheme along with the complete CHSL syllabus 2022 of all sections under Tier 1 has been provided below:

The questions asked in Tier 1 are included from four subjects; General Intelligence and Reasoning, General Awareness, Quantitative Aptitude, and English Comprehension. The overview of the section-wise SSC CHSL Exam syllabus 2022 is given in the below table. Candidates must go through all the topics, make a list of important topics and start studying to crack the exam.

Now let’s take a look at each section separately and what are the important topics including in it. The detailed syllabus of each subject has been provided below:

For your convenience, we are providing the exact number of questions asked from the General intelligence section in the SSC CHSL Tier 1 Exam which was held in April & August 2021. 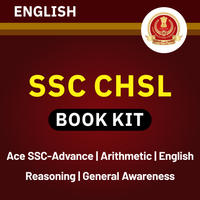 Go through the below table accurately summing up the number of questions from the central topics in the SSC CHSL Tier 1 Exam which was held in April & August 2021. The distribution will help you prepare the topics accordingly.

The SSC CHSL Quantitative Aptitude syllabus is the lengthiest and gives a hard time to many aspirants. The topics covered in Quantitative aptitude have been listed below with the subtopics. Candidates must go through this syllabus and work accordingly.

The SSC CHSL Quantitative aptitude syllabus covers the topics mentioned in the below table along with the total distribution. Check out below:

Questions are designed to test the candidate’s general awareness of the environment around him and its application to society. Questions are also designed to test knowledge of current events and of such matters of everyday observation and experience in their scientific aspect as may be expected of an educated person. The test will also include questions relating to India and its neighboring countries especially pertaining to History, Culture, Geography, Economic Scene, General policy, and scientific research.

The difficulty level of the general awareness section can not be neglected when it comes to the SSC CHSL exam. We have provided a number of questions from the relevant topics in the SSC CHSL Tier 1 Exam which was held in April & August 2021.: 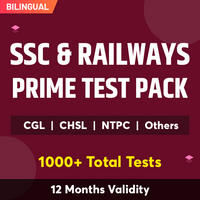 SSC CHSL Tier 2 is the descriptive type of paper. This can be written in Hindi or English. Candidates have to secure a minimum of 33% marks to qualify for the SSC CHSL Tier 2. The details of Tier 2 are as follows:

As mentioned above, this paper requires candidates to write an essay and Letter/Application that tests the writing skills of the candidates. The essay topics will be related to National Interest, Finance & Economy, Ecological Issues, Social Issues, Politics, Schemes & Governance, Technology, Sports, Geopolitics, Environmental Concerns, etc. While, the type of letter/ application asked will be Complaint, Suggestion, Application, Official Appreciation, Follow up or Feedback, etc.

Tier-III of SSC CHSL 2021-22 will be a Skill/ Typing Test which would be of qualifying nature. The final merit of the selected candidates will be based on the basis of the total score obtained in Tier 1 and Tier 2.

In this test, a candidate must have a data entry speed of 8,000 (eight thousand) Key Depressions per hour. The duration of the Test will be 15 minutes and an English document having about 2000-2200 strokes/key-depressions would be given to type.

Ans. In SSC CHSL Tier 1 Exam, candidates will be given 100 questions from 4 subjects; General Intelligence and Reasoning, General Awareness, Quantitative Aptitude, and English Comprehension to be attempted in 60 minutes.

Q. What are the subjects in SSC CHSL Tier 1 Syllabus?

Ans. Candidates can check the detailed syllabus of Tier 1 in the article. The questions asked in Tier 1 are included from four subjects; General Intelligence and Reasoning, General Awareness, Quantitative Aptitude, and English Comprehension.

Q. What is the addition in the SSC CHSL Tier 2 Exam?

Ans. In SSC CHSL Tier 2 Exam candidates need to write essays and Letter/Application that tests the writing skills of the candidates.

Ans. Tier-III of SSC CHSL 2021-22 will be a Skill/ Typing Test which would be of qualifying nature. The final merit of the selected candidates will be based on the basis of the total score obtained in Tier 1 and Tier 2.