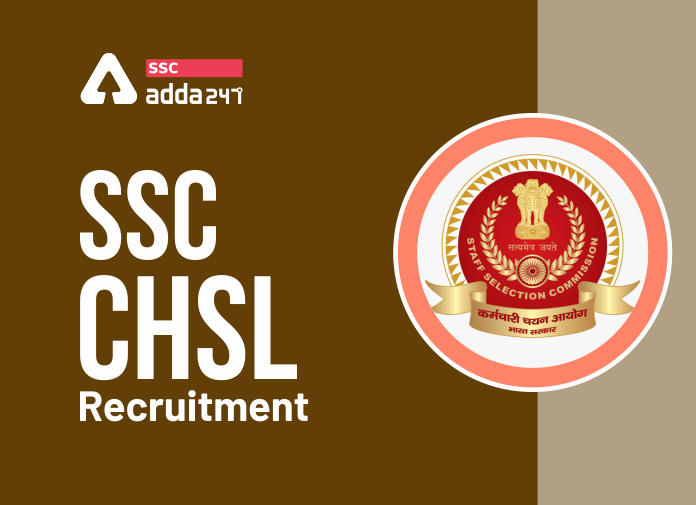 Latest Update [4th August 2022]: Staff Selection Commission has issued a notice with the tentative vacancies for the Combined Higher Secondary (10+2) Level Examination, 2021 updated as on 4th August 2022 on the official website. Through this notice, SSC has notified a total of 6072 tentative vacancies for SSC CHSL 2021-22. Candidates can refer to the notice mentioned below for the detailed vacancy distribution.

The selection process for Assistants / Clerks will be done through the computer-based test, descriptive paper, skill test, or typing test. Interested candidates must go through the detailed notification provided below. SSC is one of the biggest government organizations which conducts recruitment exams for thousands of vacancies across the country. In this article, we will be discussing important details about SSC CHSL Selection Criteria, SSC CHSL Exam Pattern, SSC CHSL Age Limit, SSC CHSL Eligibility Criteria, SSC CHSL Syllabus, etc.

Staff Selection Commission has released the SSC CHSL 2022 Notification PDF on their official website i.e.ssc.nic.in. The commission will soon release a huge number of vacancies through this for various posts. This is a great opportunity for the young aspirants who desire to serve under  Ministries/ Departments/ Organizations of the Government of India. We have summarized all the important details regarding SSC CHSL 2022 in the below table.

Staff Selection Commission released the official notification for the recruitment process of SSC CHSL 2022 (10+2) on www.ssc.nic.in on 1st February 2022. Candidates applying for SSC CHSL 2022 Recruitment will be eligible for the following posts under SSC CHSL 2022:

SSC released the notification on 1st February 2022 along with all the important dates regarding the SSC CHSL 2022. Candidates preparing must know every detail of SSC CHSL 2022 notification like release date, online application process start date, last date to apply, examination dates, etc which we have provided in the table given below.

Here the below details are tabulated for SSC CHSL 2022 as the recruitment process is yet to be completed. SSC CHSL Tier-II exam was conducted on 9th January 2022.

Staff Selection Commission will soon release the SSC CHSL 2022 vacancy on the official website i.e. www.ssc.nic.in. Commission has not released the exact number of vacancies for SSC CHSL 2022. Every year thousands of vacancies are filled by SSC in Government departments. SSC will soon release the notification to disclose the SSC CHSL Vacancy 2022. SSC has released 4893 Vacancies in various departments of the government of India through SSC CHSL Examination 2019-20. Check the below-given table for vacancy details.

SSC has released the notice with the SSC CHSL 2021 tentative vacancies. The total number of vacancies notified is 6072 for various posts and categories. The category-wise vacancy distribution is as follows:

The candidates must satisfy and fulfill the detailed eligibility criteria released by the commission in the notification PDF. Age and educational qualification are important aspects for satisfying eligibility. We are discussing all the important eligibilities fulfilled by the candidates to register for SSC CHSL 2022.

The age limit mentioned in the official notification is as follows:

The candidates need to fulfill the following to fit into the SSC CHSL 2022 Application Criteria:

(a) a citizen of India, or
(b) a subject of Nepal, or
(c) a subject of Bhutan, or
(d) a Tibetan refugee who came over to India, before the 1st January 1962, intending to permanently settle in India, or
(e) a person of Indian origin who has migrated from Pakistan, Burma, Sri Lanka, East African countries of Kenya, Uganda, the United Republic of Tanzania(Formerly Tanganyika and Zanzibar), Zambia, Malawi, Zaire, Ethiopia, and Vietnam intending to permanently settle in India.

Candidates need to pass through 3 Tiers to be eligible to get appointed in the SSC CHSL 2022 exam. The SSC CHSL 2022 exam is held in 3 stages called (Tiers) the first is online and the next two are offline exams. The selection process has been briefly mentioned in the table given below: Candidates must go through the details to avoid confusion related to the selection process.

SSC CHSL 2022 Tier 1 exam contains 100 questions to be attempted in 60 minutes which will add up to a total of 200 marks. The subjects along with the distribution of questions have been shown in the table given below:

The skill test or computer proficiency test will be conducted to check the typing skills of the candidates and whether they are eligible to work on computers. Some points focussing on the SSC CHSL 2022 Skill test are as follows:

The SSC CHSL 2022 Online-based exam includes 4 sections namely General Intelligence and Reasoning, Quantitative Ability, English Language, and General Awareness. Knowing the syllabus thoroughly is the foremost thing to be done by the aspirants without any further ado. Here is the list of subject-wise topics that must be read and prepared properly.

SSC CHSL 2022 exam will come with its own set of challenges in the difficulty level of the exam. As there has been adrift in the type of questions asked, one must be well aware of the SSC CHSL cut-off 2022 for previous years. In SSC CHSL 2018, a total of 45101 candidates qualified in Tier 1 to appear for the Tier 2 exam. Check the cut-off given below:

SSC CHSL 2022 Admit Card will be released by the commission before 10-15 days of the exam. Candidates must note that it is mandatory to carry the admit card to the exam center without which candidates will be barred from taking the SSC CHSL examination. One must also carry a passport-size photograph along with original id proof to the center.

SSC CHSL 2022  answer key will be released by the SSC soon after the written exam and candidates can calculate their score by the SSC CHSL Answer key and raise objections. Candidates must read the detailed information provided in the below article.

The SSC CHSL Result has been declared and has been uploaded. Candidates can check the mentioned link to check their SSC CHSL Result 2022 for Tier 1. After the completion of the detailed selection process, SSC will disclose the result on the official website.