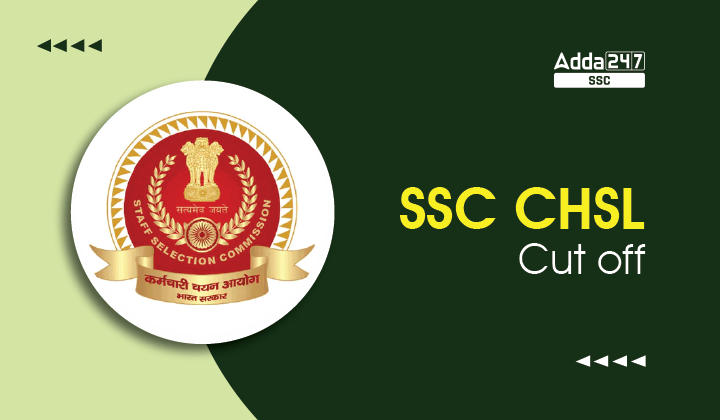 SSC CHSL Cut-Off 2022: SSC will announce the CHSL Cut-Off marks for Tier 1 along with the Tier 1 result for the SSC CHSL 2022 Exam on the official website. SSC conducts the SSC CHSL 2022 Tier 1 examination across the country for all the aspirants whose application forms are found to be in order. Candidates must work hard if they want to get selected for the government services through SSC CHSL recruitment. In this article, we have provided the SSC CHSL Tier 1 2022 Previous Year Cut off .

We have summarized the SSC CHSL Cut off Tier 1 2022 details in the below table. Candidates can check the details of SSC CHSL Cut Off 2022 here.

Here we have tabulated the Cut off for the SSC CHSL Tier 1 Exam announced by the officials on 4th August 2022. Candidates can check the official SSC CHSL Cut Off for tier 1 exam from below table-

Aspirants of the examination can check category-wise SSC CHSL Tier 1 Cut off and (Tier 1 + Tier 2) Cut Off from the table provided below.

SSC CHSL Final result was declared on 10th May 2022 in which 4684 candidates are selected for the allotment to various departments. The final cut off for SSC CHSL 2019 as provided by the commission is given below:

In the following graph, candidates can check SSC CHSL Cutoff for tier 1 examinations of different years. 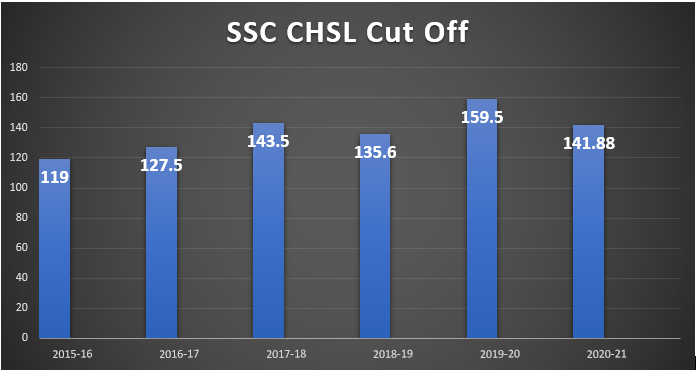 So, one must be aware of the SSC CHSL Cut off of previous years and how it differs over the years past 5 years. Knowing the previous year’s Cut off surely helps in determining the possibility in the future and the extra efforts one needs to put in the exam preparation to score well. Take a look at the category-wise Cut off for SSC CHSL Tier 1 written exam over the years from 2015 to 2020 for the post of LDC/PA etc. The table shows a comparison between SSC CHSL Cut off accurately:

Some important points to note down from the above table:

Get Memory Based Paper For SSC CHSL Tier 1 Exam

Let’s take a look at the factors responsible for the cut off of the SSC CHSL Tier 1 examination in the coming years:

1. The Level of exam
The difficulty level of an examination is a crucial factor in deciding the cutoff. Like last year, the SSC CHSL exam was moderate for some shifts while difficult for others. The level of the Tier I exam can play an important role in deciding SSC CHSL Cut off.

4. The Number of Vacancies
The total number of vacancies for the SSC CHSL 2022 exam will be released in due course.

SSC CHSL 2019-20 Tier I exam was held on for descriptive Paper TIER II 14-02-2021 for recruitment to the posts of Postal Assistant, Sorting Assistant, Junior Secretariat Assistant, DEO, LDC, etc appeared from all over India. A total number of 28,508 candidates have qualified for Typing Test. The detailed category-wise Cut off for various posts is provided in the table given below. The cut off varies according to the posts as seen below:

The below table depicts a comparison of the final SSC CHSL Cut off for the exam held over the years. This table will give you an idea of how much you need to score in the tier II exam to get your name on the final merit of the SSC CHSL examination. The post wise and category wise breakups are given here:

Some important points to note down from the above table regarding the final SSC CHSL cut off marks:

SSC CHSL Final result was declared on 20th December 2019 in which more than 5000 candidates are selected for the allotment to various departments. The final cut off for SSC CHSL 2017 as provided by the commission is given below:

How is the SSC CHSL Cut off 2022 calculated?

The candidates are required to secure Cut off marks in each of the four sections of the question paper. Additionally, they also have to score the overall Cut off score to pass the prelims.

The final cut off score for Tier 1 is, therefore, calculated as:

SSC CHSL 2019-20: Number Of Vacancies in the previous years

What were the total vacancies in the SSC CHSL exams held over the years? Have a look at the date given below:

We hope this post helped make an effective comparison among the respective cutoffs for the last 4 years to make headway in SSC CHSL 2019-20 Exam. Let the combination of your determination and preparation beat the competition, no matter how tougher it may be.

Q. What are the required qualifications for SSC CHSL?

Ans. CHSL or Combined Higher Secondary Level exam is a 10+2-based exam. Class 12 passed are eligible for CHSL.

Ans. The Tier I cut off for 2020-21 for SSC CHSL has been declared which is as follows:

Q. What is the mode of exam for SSC CHSL?

Ans: Yes, but in the year 2020 SSC has released SSC CHSL tier I and tier 2 combined.

Ans: Candidates can check the details above.