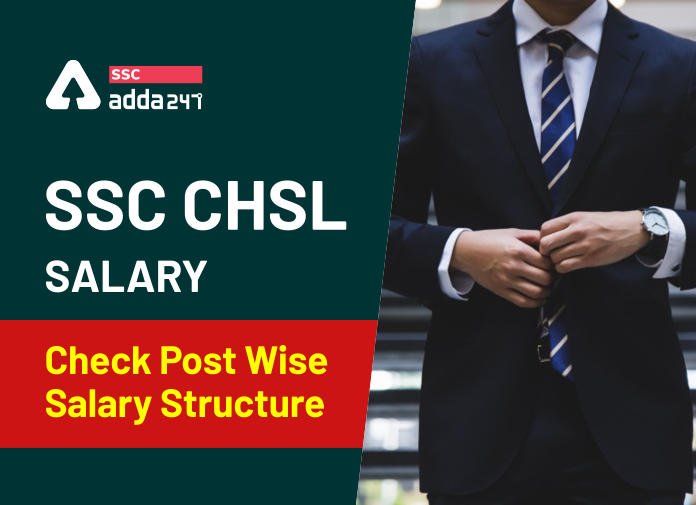 SSC CHSL Salary 2022: SSC CHSL Salary 2022 with in-hand salary & Post wise salary for various posts under the SSC CHSL examination is provided in the post as per the recent changes after the 7th Pay Commission. SSC CHSL 2022 Notification was out on 1st February 2022. So, it is necessary to know about the SSC CHSL Salary Structure as it provides you the required knowledge about the post one will be getting after the appointment. We have already provided the Notification PDF, Eligibility Criteria FAQs, Exam Pattern, Syllabus for SSC CHSL. Now, Check out the SSC CHSL Post wise salary structure along with the in-hand salary, job profile, perks, and other allowances.

The SSC CHSL posts come under Pay Level 2 and Pay Level 4. The basic Salary structure for SSC CHSL Posts has been provided in the table given below:

For the detailed SSC CHSL In-hand salary after the 7th Pay Commission, candidates must know the various parameters that are added to the basic salary. The total in-hand salary that one gets in SSC CHSL has been depicted in the tables given below:

The SSC CHSL In-Hand Salary for the post of Lower Division Clerk (LDC)/ Junior Secretariat Assistant (JSA) in cities X, Y, and Z are given in the below table:

The SSC CHSL In-Hand Salary for the post of Postal Assistant (PA)/ Sorting Assistant (SA) in cities X, Y, and Z are given in the below table:

The SSC CHSL In-Hand Salary for the post of Data Entry Operator (DEO) in cities X, Y, and Z are given in the below table:

The allowance & perks offered to various posts under SSC CHSL are immense. The perks & allowances given to the government employees make it the most desired job by govt job aspirants. Here is the list of allowances added up to the basic pay while working as SSC CHSL Employee:

While applying for SSC CHSL 2019-20, the first question that arises is whether there are any growth and promotions in SSC CHSL? Here is the answer. The promotions in SSC CHSL can be done on the basis of departmental exams to be given after 5-7 years of experience. Otherwise, an employee is eligible to get promoted automatically after 8-10 years of service in a particular grade. The Growth chart and promotions are depicted below in the form of a flow chart:

Q. Is SSC CHSL is a Good Job?
Ans. Yes, it is a good job, the perks & allowances given to the government employees make it the most desired job by govt job aspirants.