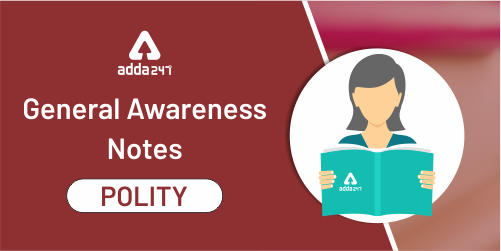 Dear Readers, GA section is taken on the light note but plays a vital role in achieving the score required to cross the cut off marks. We are providing important Questions for this, it will help you to score well in GA section if you regularly follow the contents provided on scaffold website and Adda247 app regarding general knowledge important questions. We wish you the best wishes for all the upcoming exams.

THE LOKPAL AND THE LOKAYUKTAS

The Lokpal
A Lokpal is an anti-corruption authority or body of ombudsman who represents the public interest in the Republic of India. The current Chairperson of Lokpal is Pinaki Chandra Ghose. The Lokpal has jurisdiction over central government to inquire into allegations of corruption against its public functionaries and for matters connected to corruption. The Lokpal and Lokayuktyas Act was passed in 2013 with amendments in parliament, following the Jan Lokpal movement led by Anna Hazare in 2011. The Lokpal is responsible for enquiring into corruption charges at the national level while the Lokayukta performs the same function at the state level.

A brief history
From 1963, India has been nurturing the ambition to appoint a Lokpal, a phrase coined by L.M. Singhvi. Copied from Sweden’s Ombudsman and its adaptation in the U.K. in 1967, the idea was to expose ‘maladministration’, which British MP Richard Crossman defined as “bias, neglect, inattention, delay, incompetence, ineptitude, arbitrariness and so on”. Despite affirmations to its need, no one really wanted a Lokpal in India, preferring instead the mild Vigilance Commission from 1964 to 2003.

In 1960, Indian parliament first discussed the idea of appointing an ombudsman who would be empowered to look into complaints against public functionaries, including MPs. In 1966, the first ARC (Administrative Reforms Commission) issued recommendations for the creating ‘Ombudsman’ in India. It was a two-tier system, one for the central and other for the state level, and both were to work independently as per the recommendations made. The Lok Pal Bill was introduced in Parliament 8 times but was not passed.

In the year 2002, the M.N. Venkatachiliah Committee reviewed the functioning of the Constitution made recommendations for appointing the Lok Pal and Lokayuktas; However, the committee kept the Prime Minister of India out of the jurisdiction of the Lokpal.

The second Administrative Reforms Commission (ARC), under Chairmanship of Veerappa Moily recommended immediate creation of the office the Lok Pal.

In the year 2011, the government constituted a Group of Ministers (GoM) to give suggestions on how to combat wide-spreading corruption in India and to evaluate the long pending Lok Pal Bill. Introduction of the Lokpal Bill, 2011 in the Parliament, which provided for appointment of the Lokpal for inquiring into complaints of corruption against specific public servants, followed the process.

COMPOSITION OF THE LOKPAL

Consisting of not more than nine members (a chairperson and up to eight other members). The president of India shall appoint each member of the Lokpal on the basis of the recommendations of the Selection Committee that comprising of:
(a) the Prime Minister – Chairperson And members are
(b) the Speaker of the House of the People
(c) the Leader of Opposition in the House of the People
(d) the Chief Justice of India or a Judge of the Supreme Court nominated by him
(e) one eminent jurist, as recommended by the chairperson and members referred to an in clauses (a) to (d) above, to be nominated by the President.

The Lokayukta is an anti-corruption ombudsman organization in the Indian states.Once appointed, Lokayukta can not be dismissed nor transferred by the government, and can only be removed by passing an impeachment motion by the state assembly.

The Administrative Reforms Commission (ARC) headed by Morarji Desai submitted a special interim report on “Problems of Redressal of Citizen’s Grievances” in 1966. In this report, the ARC recommended the setting up of two special authorities designated as ‘Lokpal’ and ‘Lokayukta’ for the redressal of citizens’ grievances.

The Lokayukta, along with the Income Tax Department and the Anti Corruption Bureau, mainly helps people publicise corruption among the Politicians and Government Officials.Many acts of the LokAyukta have resulted in criminal or other consequences for those charged.

Maharashtra was the first state to introduce the institution of Lokayukta through The Lokayukta and Upa-Lokayuktas Act in 1971. This was followed by similar acts that were enacted by the states of Odisha, Rajasthan, Bihar, Uttar Pradesh, Karnataka, Madhya Pradesh, Andhra Pradesh, Gujarat, Kerala, Tamil Nadu and the union territory of Delhi.