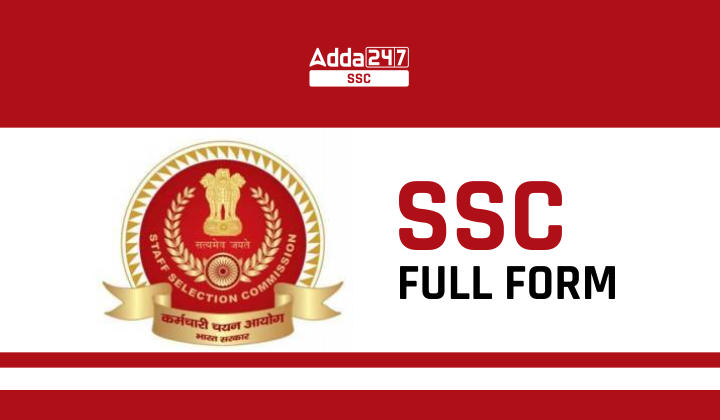 What is SSC full form? It is the Staff Selection Commission which is an organization set up by the Government of India, to recruit employees in various departments working for the government. SSC is an apex body responsible for conducting the recruitment process to fill up vacant posts in various ministries and departments. The organization of SSC comes under the Department of Personnel and Training (DoPT) which has a Chairman, two Members, and a Secretary-cum-Controller of Examinations. The current Chairman of SSC is Braj Raj Sharma. Know about all the details regarding the SSC full form and how SSC work.

How was SSC Formed?

What are the different exams conducted by SSC?

The organization is mainly engaged in conducting competitive exams to select aspirants for various posts in the departments and organizations. All the important decisions were to be taken by the organization with due acceptance from DoPT as it functions as a subordinate office of DoPT.  Accordingly, SSC conducts the following Competitive Exams:

The full form of CGL is the Combined Graduate Level Exam, it is annually conducted by the board to recruit aspirants for various Group B and Group C posts in the government. Every year more than 7000+ vacancies are released for the SSC CGL recruitment process for which more than 10 lakhs candidates register themselves, therefore the competition in the SSC CGL examination is very steep. The minimum educational qualification to apply for this recruitment process is that an aspirant must possess a graduate degree from a recognized university. The selection process for  SSC CGL consists of 4 different tiers which are based on different posts. The posts for which SSC CGL is conducted every year are mentioned below.

If you want to know every detail regarding SSC CGL, like notification dates, last date to apply online, examination pattern, selection process, syllabus, etc. then click on the link provided below.

The Combined Higher Secondary Level Examination (CHSL) is conducted by SSC to provide 12th-pass candidates with an opportunity to work for the government. Every year SSC Releases 4000+ vacancies for SSC CHSL to recruit aspirants for the posts of Lower Division Clerk (LDC)/ Junior Secretariat Assistant (JSA) post,  Postal Assistant (PA)/ Sorting Assistant (SA) post, Data Entry Operator (DEO) and Data Entry Operator, Grade A. The selection process for SSC CHSL consists of 3 Tiers, one is an objective computer-based examination, and the other is a Descriptive paper in English/Hindi, after clearing the 2 tiers aspirants will have to go through a skill test for the final selection. Follow the link provided below to check the complete details regarding the SSC CHSL examination.

SSC MTS stands for Staff Selection Commission Multitasking Multi Tasking Staff, which recruits 10th pass candidates in the government of India. SSC MTS recruitment process is done to recruit aspirants for more than 3000+  vacancies for Havaldar (CBIC and CBN) & Multi Tasking Staff, this recruitment notification is released to recruit Indian youth for the following posts, the selection process for the same consists of 2 different stages viz objective based examination and descriptive paper.

Complete details for SSC MTS are provided in the article whose link is provided below. Follow the link for more updates.

SSC CPO stands for Staff Selection Commission Central Police Organization Exam, which is conducted to recruit graduates for various posts in the police department. Candidates through this recruitment process will be selected as Sub-Inspector (SI) in Delhi Police, Central Armed Police Forces (CAPFs), and Assistant Sub-Inspector (ASI) in CISF. The examination pattern for the SSC CPO notification consists of the following stages.

SSC Stenographer is an examination to recruit candidates for Stenographer Grade C (non-gazetted post) and Grade D posts in various departments, ministries, and organizations of the Government of India. It is an All India level examination conducted by SSC annually. For more details regarding the SSC Stenographer vacancy, eligibility criteria, selection process, examination pattern, etc candidates can follow the link which is provided below.

Q. What is the full form of SSC?

Q. What is the full form of SSC CGL?

Q. What is the full form of SSC CHSL?

Q. What is the full form of SSC MTS?

Q. What is the full form of SSC CPO?

Ans: The full form of CPO is the Central Police Organization Exam.