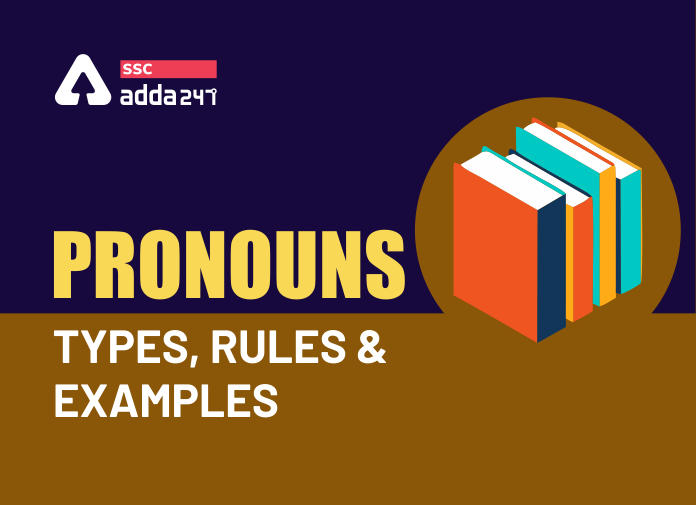 Pronouns: Pronouns are the stunt doubles of the English language. They keep the communication going with or without the nouns. Pronouns come in to keep nouns from getting repetitive or when nouns are not clearly known. They constitute an important part of the English language sections. Several questions are asked from pronouns in various competitive examinations. You must thoroughly know the concept and rules of Pronouns for a better understanding. We are providing you with notes on pronouns constituting types of pronouns and rules along with examples.

“A pronoun is a word used instead of a Noun”. (I, we, you, he, she, it, they) are called personal pronouns because they stand for the three persons.

Subject and object pronouns are used in everyday language. However, it can be tricky to remember which is which. The subject always takes action. The object is part of the activity, but it does not do any acting.

Here is an example:

Subject and object pronouns function in the same way

I might see you later.
You have to come now.
She lives in Nebraska.
He makes me angry
It just might work.
They caught the last train.
We cant see the end.

Sarah hit me on the arm.
I need to tell you something.
Larry took him aside.
The message wasn’t for her.
Take it to the store.
Summer is fun for us.
Margaret took them downstairs

Example: That is our clubhouse.
‘Our’ shows the possession of the object ‘clubhouse’.
Gender
Example:  He went to the market.
He is used for the male gender.
Other examples – (his, him, he etc.)
Example:  She is doing the laundry.
‘she’ is used for the female gender.
(Her, hers, etc.)
Example:  It is important to them.
‘It’ is gender-neutral as it shows an object,
‘Them’ is also gender-neutral as ‘Them’ can consist of both genders.
Others gender-neutral pronouns are – (Their, they, its.)
Number
Singular Pronoun – where the pronoun is only referring to one specific Noun.
Example: That book belongs to me.
Plural Pronoun – where the pronoun is used to refer to a number of nouns.
Example: That is Their book, not yours.
REFLEXIVE PRONOUN
“They are object pronouns that we use when the subject and the object are the same Noun.”
“Reflexive pronouns are those which are used to indicate a noun which has been used in an earlier part of the same sentence. (myself, themselves, yourself, ourselves, herself, himself, itself.)
Example:

Indefinite pronouns replace nouns that are not specified. They include the following: all, another, any, anybody, anyone, anything, both, each, either, everybody, everyone, everything, few, many, neither, nobody, none, no one, nothing, one, several, some, somebody, someone, and something.

“These Pronouns refer to individual elements in a group or a pair, one individual at a time.”
Examples
Each, either, neither is called distributive pronouns because they refer to persons or things, one at a time.
Each →used to denote every one of a number of persons or things taken singly.
Either means the one or the other of two.
Neither means not the one nor the other of two.
It is negative of either.
Either and Neither should be used only in speaking of two persons or things.
When more than two are spoken of (Any, No one, and none) should be used.

Each and one really belong to the subject, Other and another are objects, but Each other and one another have become compound pronouns, (and are called reciprocal pronouns) and are rarely separated even by a preposition)
Examples:

These pronouns are used to connect a clause or phrase to a noun or pronoun. These are who, whom, which, whoever, whomever, whose, whichever and that.
Example: The driver who Ran the stop sign was careless.
Which and that are generally used for objects. Who and whom are used for people and whose is used to show possession.
Examples:

1. Since a personal pronoun works in place of a noun, the number, gender, and person of the pronoun must be according to the noun only.

2. When two or more singular nouns are joined by ‘And’ the Pronoun for them always in the plural number.

3. When two or more singular nouns joined by ‘And’ are preceded by ‘Each’ and ‘Every’ the pronoun must be singular.

Ex.- Every student and every teacher took his or her seat.
Each of Ram and Shyam has done his work.
Each man and each boy in the party has got his share.

4. When a singular noun and a plural noun are combined by ‘Or’, ‘Either-or’,  ‘Neither-nor’,  the singular noun usually comes first in the sentence and the pronoun must be in the plural number.

Ex.- Either the manager or his subordinates failed in their duty in sending the official message.

5. When two or more singular nouns are joined by ‘Either-or’, ‘neither- nor’ the pronoun is always in the singular form.
Ex.- Ram or Mohan should invest his money in some business.
Neither Ram nor Shyam confessed his guilt
Either Sita or Kamla forgot to take her prize.

6. ‘Either and neither’ are always used in relation to two things or two persons, for more than two ‘Any’, or ‘None’ must be used.

7. When in a sentence ‘one’ is used as the subject, all the pronouns in the sentence must be changed into ‘one’ or one’s and not his, her or him.

Ex.-One should keep one’s promise.
One should do one’s duty.
One must finish one’s task in time.

8. When any pronoun functions as the complement of the verb ‘to be’, it is always in the nominative case.

It was he who could solve the problem Easily. (Correct)

9. Whenever any pronoun functions as an object of the main verb or a preposition, it is in the objective case.

Ask he to go. (Incorrect)
Ask him to go. (Correct)

10. When two singular nouns joined by ‘and’ denote the same person or thing, the pronoun used for them must be singular in number. The article ‘The’ is placed before the first Noun.

Ex.- The accounts officer and treasures should be careful in his work of keeping accounts.

12. A pronoun should be used in the objective case in a sentence beginning with Let.

Ex.- Let him go to his office
Let her submit the records in time.

13. While confessing a fault (or expressing a negative idea) the sequence of the personal pronouns should be as follows.

I, you and he are in the wrong and will be punished.
[First person first, second person next and third person last]

14. While expressing a positive idea or praise, the sequence of the personal pronouns should be as follows.

Ex.-I shall buy some apples.
I shall not buy any apples.

17. When a pronoun stands for a collective noun, it must be in the singular number and in the neuter gender if the collective noun is viewed as a whole.
Ex.-The Jury gave its verdict.
The Jury were divided in their opinions.

18. (a) Each other is used for two persons.
Ex.-The two brothers disliked each other.
Romeo and Juliet loved each other.
The two children quarreled with each other.

18.(b) One another is used for more than two persons.
Ex.-Good boys do not quarrel with one another.
All the students of the class are friendly, they like one another.

19. The pronouns who, whom, whose are generally used for persons
Who- Nominative case
Whom- Objective case
Whose-Possessive case

20.  Use of ‘Which’
(a) For infants, small animals, and objects.
Ex.-This is the baby which was lost in the theater.
This is the dog which my friend bought from the U.S.

(b) When selection is expressed.
Ex.-Which of these television sets do you want to purchase?

(c)To refer to a sentence.
Ex.-He was said to be drunk, which was not true.

21. Uses of ‘That’
(a) For persons, lifeless things and small animals in the singular or in the plural number.
Ex.-This is the girl that failed in the exam.
This is the Radio that I bought Yesterday.