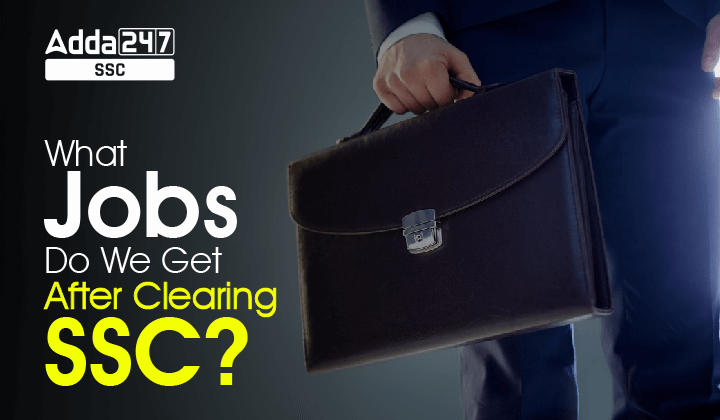 What Jobs Do We Get After Clearing SSC?

Staff Selection Commission is one of the most desired jobs when it comes to government jobs in SSC. Candidates seeking a well-paid job under the central government must apply for the SSC exams. But the question is what jobs do you get after clearing the SSC exams? We will ease it for you by providing the details of government jobs in SSC. This post gives an insight into all the exams and posts provided by vacancies in SSC.

You must be well aware of the posts before applying for any recruitment. It helps you to know about the prospects of getting into the central government. The posts under SSC vary from pay level 1 to pay level 8. One has to opt for the right exam to get into the desired post. There are lots of Govt. jobs in SSC for the candidates in various departments. The details related to govt. jobs in SSC are provided below.

For getting into SSC, you must crack the exam required to get appointed in the desired post. There are various exams conducted by the commission every year to recruit thousands of candidates. We are providing detailed information for “What are the jobs in SSC?” Let’s take a look at the various exams you can sit for when eyeing SSC:

SSC CHSL job is for all the 12th-pass students. The post varies from Level 2 to Level 4. You will be recruited as Lower Division Clerk, Junior Secretariat Assistant, Postal Assistant, DEO, etc. The post-wise distribution has been provided below.

After the 7th Pay Commission, there was a major hike in the gross salary of the SSC JE in various departments. The SSC JE comes under Group B, a non-gazetted post in Level 6. Junior Engineer in the railways gets various allowances and perks that add to their salary raising a hike in their respective salary.

Many candidates with stenography skills look for this recruitment throughout the year as it provides a great opportunity with a good pay scale.

In Central Police Organization, you can be recruited as a sub-inspector or Assistant sub-inspector. The Basic Salary Structure along with the level, group & pay scale is given below:

Know about the SSC CPO Salary

Q. What is the govt. jobs in SSC for 12th-passed candidates?

Ans: SSC gives an opportunity for various posts like SSC CHSL, SSC Stenographer, and 12th  passed candidates can apply for these vacancies in SSC.

Q.What is the age limit to apply for the SSC CGL exam?

Q. What are the jobs under SSC CGL?

Q. Can a 12th-passed candidate apply for the SSC CGL?

Ans: No. The candidate must possess a bachelor’s degree for the SSC CGL.

What is the govt. jobs in SSC for 12th-passed candidates?

SSC gives an opportunity for various posts like SSC CHSL, SSC Stenographer, and 12th  passed candidates can apply for these vacancies in SSC.

What is the age limit to apply for the SSC CGL exam?

What are the jobs under SSC CGL?

Can a 12th-passed candidate apply for the SSC CGL?

No. The candidate must possess a bachelor's degree for the SSC CGL.