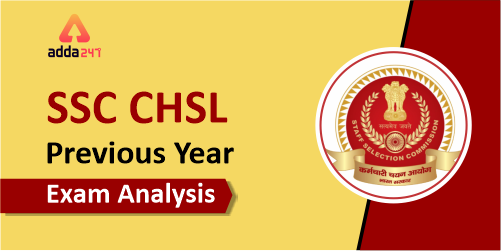 SSC CHSL Exam Analysis 2019 with comparison to the previous year exam analysis of SSC CHSL Tier 1 exam is provided in this post. The SSC CHSL 2019-20 Notification is released and the exam is scheduled to be conducted from 16th to 27th March 2020. The Combined Higher Secondary Level Tier 1 examination will be conducted by the Staff Selection Commission (SSC) for the recruitment to various posts of Group C and D level, with lakhs of candidates appearing for the said examination. The tier 1 exam is conducted in multiple shifts and candidates aspire to give their best in the exam. As the SSC CHSL Notification is released, candidates must have started their preparations and are looking for the SSC CHSL Previous years’ exam analysis.

The exam pattern of the SSC CHSL Tier 1 Exam is as given below:

Before appearing for the SSC CHSL 2019 exam, candidates must go through the detailed exam analysis for SSC CHSL Exam held from 1st July 2019. Candidates can click on the links below for subject wise exam analysis of SSC CHSL exam.

The topic-wise distribution of the English Language section for the SSC CHSL Tier 1 exam is given in the below table. Candidates must focus on all the topics equally when it comes to the English section as each topic is equally important.

Quantitative Aptitude section can have surprises with Advance and Arithmetic maths. Take a look the number of questions asked from each topic and the level as asked in the SSC CHSL Tier 1 exam:

The Reasoning section is the easiest of all. Make sure to revise all the topics thoroughly by practicing daily mocks before appearing for the SSC CHSL 2019-20 exam. Check out the distribution below:

General Awareness section is a mixture of Static GK with the current affairs. The level varies according to the shift one is appearing in. Take a look at some of the questions asked in SSC CHSL 2018-19 exam: