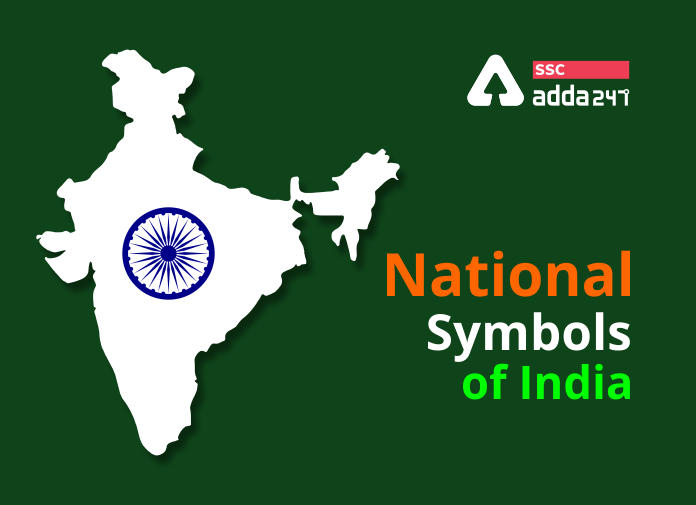 National symbols of India represent numerous objects which paint a unique identity about our country’s sensibilities. All these symbols are intrinsic to the Indian identity and heritage. These national symbols bring a sense of pride and patriotism to every Indian’s heart. These symbols were picked up at various times. Representatives are chosen carefully and each depicts a certain virtue that is a distinctive characteristic of the country. Check out the National Symbols of India list and some more information about them.

National Symbols of India in Hindi

Importance of 17 National Symbols of India

17 National Symbols are discussed below. These symbols represent a quality unique to India and its citizens. These help to preserve the chosen national symbol for generations to come. The national symbols of India will Infuse a deep sense of pride in the hearts of Indian citizens.

Tiranga or Tricolour is the national flag of India. It is a horizontal tricolor of India saffron (Kesari) at the top, white in the middle, and India green at the bottom in equal proportion. The chakra in the middle has a diameter approximately the width of the white band and it has 24 spokes. The ratio of the width of the flag to its length is 2:3. The National flag was designed by Pingali Venkayya and was adopted by the Constituent Assembly on 22nd July 1947.

The song Vande Mataram, composed in Sanskrit by Bankimchandra Chatterji, is the National song of India. It was declared the National Song of India on 24 Jan 1950. The First President of India, Dr. Rajendra Prasad came up with a statement in the Constituent Assembly, “the song Vande Mataram, which has played a historic part in the struggle for Indian freedom, shall be honored equally with Jana Gana Mana and shall have equal status with it.” The first political occasion when Vande Mataram was sung was the 1896 session of the Indian National Congress.

The national emblem of India is adopted from the Lion Capital of Ashoka at Sarnath. In the national emblem, four lions are standing back to back, mounted on an abacus with a frieze carrying sculptures in high relief of an elephant, a galloping horse, a bull, and a lion separated by intervening wheels over a bell-shaped lotus. The motto of the national emblem is Satyameva Jayate

The Indian peacock (Pavo cristatus) is the National Bird of India. Peacock is a colorful, swan-sized bird, with a fan-shaped crest of feathers, a white patch under the eye, and a long, slender neck. Peacock is majorly found in the drier lowland areas and is a resident breeder in the Indian subcontinent. It was declared the national bird of India on February 1, 1963.

Royal Bengal Tiger is the national animal of India. It was adopted as the national animal of India in April 1973 due to the receding population of tigers. The scientific name of this striped animal is Panthera tigris. It is characterized by its thick golden yellow coat of fur with dark stripes. India is home to nearly half of the total population of tigers in the world.

The National Flower of India is Lotus (Nelumbo Nucifera Gaertn). In India Lotus is a legendary flower and much folklore and religious mythology is woven around it.  Lotus is an aquatic herb that is often termed as ‘Padma’ in Sanskrit and enjoys a sacred status in the Indian culture.

The Saka Era is the National Calendar in India. It was adopted as the national calendar on 22nd March 1957. This calendar starts on 22 March and consists of 12 months or 365 days just like a normal year. In a leap year, the starting day is 21 March.

The Indian rupee (ISO code: INR) is the official currency of India. The new symbol was officially adopted in 2010 and started in circulation on 8 July 2011. The symbol is derived from the Devanagari consonant “र” (rs) and the Latin letter “R”. The symbol was conceptualized and designed by Udaya Kumar, a post-graduate in Design from the Indian Institute of Technology Bombay.

The national tree of India is the Banyan tree. The tree is found throughout the country and is native to the Indian Subcontinent only. The tree is characterized by its huge structure, large trunk, and deep roots that represent the unity of India. Its large canopy or shade of the tree helps protect people from the scorching sun during summers. The tree is often a symbol of the fabled ‘Kalpa Vriksha’ or the ‘Tree of Wish Fulfillment

King Cobra is the National Reptile of India. It is the world’s longest venomous snake which is capable of growing up to 19 ft and may live up to 25 years. In a single bite, king Cobra can kill 20 people or an elephant. It prefers to live in rainforests and plains. It is the only snake in the world that builds nests for its eggs and guards them until they hatch.

Importance of National Symbols of India

Q. What is the National Animal of India?

Q. What is the national fruit of India?

Ans. Mango is the national fruit of India.

Q. What is the National Reptile of India?

Ans King Cobra is the National Reptile of India.

Q. What are the 17 national symbols of India?

Ans. The National Emblem of India or the Lion Capital of Ashoka situated at Sarnath consists of four Lions standing back to back on a circular abacus known as an official national symbol of India.

Q. What are the national symbols and their significance?

Q. What is the National Animal of India?

Q. What is the national fruit of India?

Ans. Mango is the national fruit of India.

Q. What is the National Reptile of India?

Ans King Cobra is the National Reptile of India.

Q. What are the 17 national symbols of India?

Ans. The National Emblem of India or the Lion Capital of Ashoka situated at Sarnath consisting four Lions standing back to back on a circular abacus known as official national symbol of India.

Q. What are the national symbols and their significance?

Ans. National symbols are the symbols of country having a great significance represents the specifications of the country.