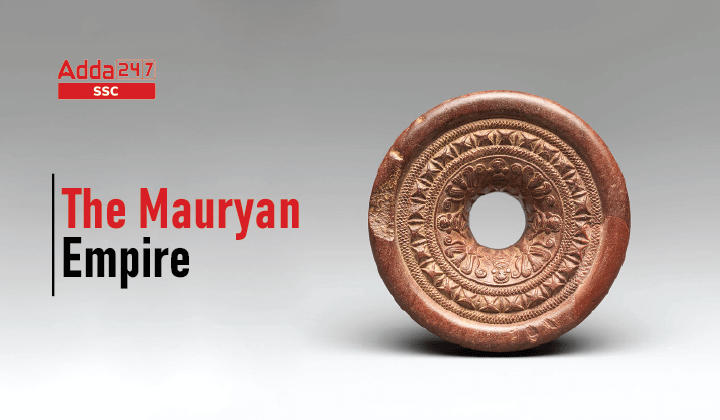 The Mauryan Empire:  The Mauryan Empire was the first pan-Indian empire. It covered a large area of the present Indian region except for Kerala, Tamil Nadu, and some parts of northeastern India, though it was centered around Magadha. Its boundary reaches parts of modern-day Iran.

The Mauryan Empire was founded by Chandragupta Maurya with the help of Kautilya. The mauryan empire was established in 321 B.C.E. and continued till 185 B.C.E. Alexander’s death in 323 B.C.E. left a large power vacuum, and Chandragupta took advantage, gathering an army and overthrowing the Nanda dynasty in Magadha, in present-day eastern India, marking the start of the Mauryan Empire. After crowning himself king, Chandragupta took additional lands through force and by forming alliances.

Chandragupta’s chief minister Kautilya, also called Chanakya, advised Chandragupta and contributed to the empire’s legacy. Kautilya is also known for writing the Arthashastra, which describes how a state should organize its economy and maintain power.

During Emperor Ashoka, the empire was expanded to it’s biggest on the Indian subcontinent, spanning more than five million square kilometres. It was surrounded on three sides by mountains: the Himalayas, the Ganges river to the north, the Bay of Bengal to the east, the Indus river, and the Arabian Sea to the west. Patliputra, which resembles modern day Patna in Bihar, was the capital of Mauryan empire.

The territorial extent of mauryan empire can be seen in the given map: 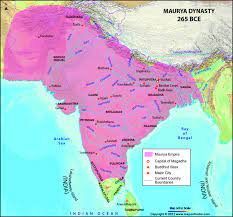 It was spanning more than five million square kilometres. It was surrounded on three sides by mountains: the Himalayas, the Ganges river to the north, the Bay of Bengal to the east, the Indus river, and the Arabian Sea to the west as can be seen in the map.

The Mauryan empire flag can be seen below: 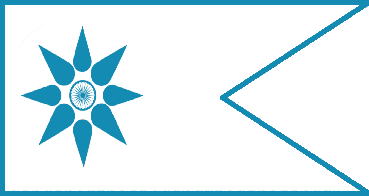 Rulers of the Mauryan Empire

Chandragupta founded the Mauryan empire. He was supported by Chanakya. Chandragupta embraced Jainism towards the end of his life and stepped down from the throne in favour if his son, Bindusara. According to Jain texts, Chandragupta Maurya adopted Jainism and went to the hills of Shravanabelagola (near Mysore) and committed Sallekhana (death by slow starvation).

Bindusara was the second king of the Dynasty and was the son of Chandragupta Maurya. He was also known as Amitraghata(killer of enemies). He explicitly ruled over much of the whole Indian land by uniting 16 nations under the Mauryan Empire. Bindusara conquered the land between the Arabian sea and the Bay of Bengal. Under his rule, almost the entire subcontinent was under the Mauryan empire.

Bindusara maintained friendly diplomatic relations with the Greeks. Deimachus was the ambassador of Seleucid emperor Antiochus I at Bindusara’s court.

Ashoka was a the greatest king of the Mauryan empire. As king, he was forceful and ambitious,
reinforcing the Empire’s dominance in southern and western India. However, his victory over Kalinga (262-261 BCE) was set out to be a defining moment in his life. After Kalinga war, looking at the devastation and violence, he decided to abjure violence and follow the path of Ahimsa.

Ashoka put the tenets of Ahimsa into practice by repealing sports like hunting and putting an end to forced labour and indentured slavery. The Dhamma Vijay policy also placed a strong emphasis on non- violence, which was to be observed by denying war and conquests as well as by refusing the death of animals.

After Ashoka, a series of less powerful rulers served. Dasharatha Maurya, the grandson of Ashoka, succeeded him. His first child, Mahinda, was intent on making Buddhism popular everywhere. Due to his eye defect, Kunala Maurya was not good at taking the enthrone, and Tivala, the descendant of Kaurwaki, passed away even before the death of Ashoka. Jalauka, another son, has a relatively uneventful backstory of life.
Under Dasharatha, the Empire lost a great deal of land, which Kunala’s son Samprati eventually took to recover.

The last ruler, Brihadratha, was killed in 185 bce by his Brahman commander in chief, Pushyamitra, who then founded the Shunga dynasty, which ruled in central India for about a century.

Decline of the Mauryan Empire

Ashoka’s rule came to an end in 232 BCE, marking the start of the Mauryan empire’s decline. A number of events were responsible for the demise of huge empire. They include:

Economic crisis: The Mauryan empire maintained the very huge army, resulting in significant expenditures for paying the soldiers and officials, which burdened the mauryan economy. Ashoka opposed the killing of animals and pets. The Brahmanical society, which depended on the offerings made in the name of sacrifices, suffered due to Ashoka’s anti-sacrifice attitude. As a result, the Brahmanas formed some sort of animosity toward Ashoka.

Dissemination of new knowledge: This material knowledge acquired from the Magadha served as the foundation for the founding and expansion of other kingdoms like the Shungas, Kanvas, and Chetis.

Ignorance of North-West Frontier: Ashoka was involved with both domestic and international missionary endeavors. It left the north west frontier open to invasions. Also successive rulers were not capable enough to safeguard it’s boundaries.
Pushyamitra Shunga, finally brought an end to the Mauryan empire and established the Shunga dynasty.

Q. The Mauryan Empire was founded after overthrowing which dynasty?

Ans: It was founded after overthrowing Nanda dynasty.

Q. Who was the last ruler of Maurya dynasty?

Ans: The last ruler, Brihadratha, was killed in 185 bce by his Brahman commander in chief, Pushyamitra.

Q.Which dynasty was established in Magadha after decline of Mauryan empire?