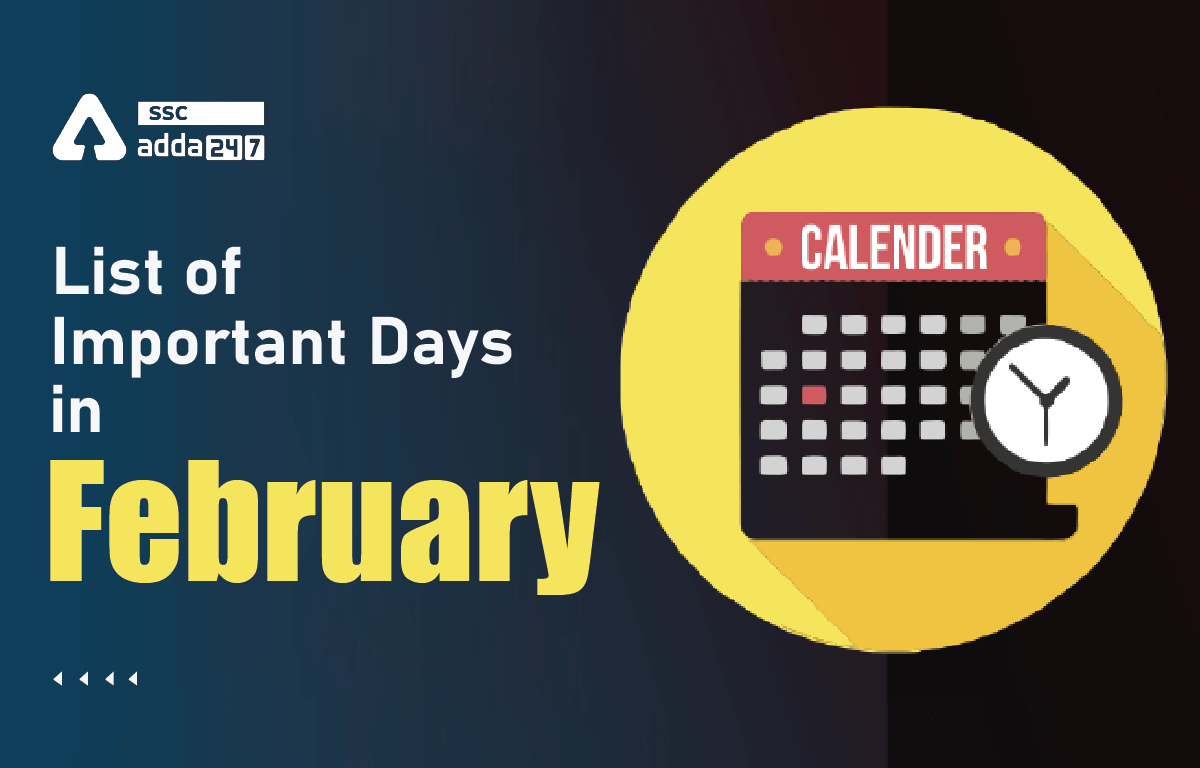 Important Days in February: February is the second month of the year and it has a total of 28 days while 29 days in a leap year. India is a land of supreme people, it has great religious importance, and it celebrates many days which having National and International importance. There are many days in February month organized and celebrated on a grand level. Important days in February 2022 are also celebrated with enthusiasm in a well-organized manner.

Important days are celebrated to create awareness among citizens. These days are celebrated with a mission and a theme that will make the citizens aware and educated. It also remembers the pride and sacrifices of our supreme people for the nation and it fills many remembrance and importance with them. So read the full article to know all the important days of February month 2022 with their significance.

Significance of Important Days in February

Every day has its importance and significance due to this the day is celebrated. The significance of all the important days of February month is mentioned below in detail.

Every year on the 2nd of February World Wetlands Day is celebrated on a global level. It is organized to make our environment safe by saving the wetlands. The day 2nd February adoption of the Convention on Wetlands on 2 February 1971, in Ramsar, Iran. It was first celebrated in the year 1997. And also celebrated every year with a mission and theme.

World Cancer Day is celebrated on 5th February every year. It is organized to make awareness, treatment, prevention, and its causes. It was initiated by the Union of International Cancer Control (UICC) to support the goals of the World Cancer Declaration, 2008. World Cancer Day was established on 4 February 2000 at the World Cancer Summit Against Cancer for the New Millenium, held in Paris (France). This day is celebrated to reduce illness and reduce the death ratio from the dangerous diseases Cancer. The government of India and the United Nations also make campaigns from time to time to save the life of citizens from Cancer diseases.

The International Day of Zero Tolerance for Female Genital Mutilation is celebrated on the 6th of February every year. It is celebrated nationwide to boost the UN’s efforts to eradicate female genital mutilation. This day was first celebrated in 2003. It is organized to make the physical health of women safe and reduce the chances of any damage or illness.

The day 13th of February is celebrated as Abraham Lincoln’s birthday. Abraham Lincoln was a successful lawyer and became the President of the United States from 1861-1865.

The Safer Internet Day is celebrated on 8th February every year. It is organized to make the use of the internet safe and easy for all children and young professionals.

National Deworming Day is celebrated on 10th February. It is an initiative of the Ministry of Health and Family Welfare, Government of India to make every child worm-free in the country. It aims to make the health of children better and free from worms.

World Pulses Day is observed on 10th February 2022. It is organized to create awareness among people to get nutritional food including pulses.

The World Day of Sick is observed on 11th February. It was introduced by Pope John Paul II as a way for believers to offer prayers for people suffering from illness.

11 February International Day of Women and Girls in Science

The birth anniversary of Sarojini Naidu is celebrated on the 13th of February every year. She was born in Hyderabad on 13 February 1879. Sarojini Naidu was an Indian political activist and poet. She was a proponent of civil rights, women’s emancipation, and anti-imperialistic ideas, she was an important figure in India’s struggle for Independence from colonial rule. Naidu’s work as a poet earned her the sobriquet ‘the Nightingale of India’, or ‘Bharat Kokila’ by Mahatma Gandhi because of the color, imagery, and lyrical quality of her poetry.

Saint Valentine’s Day or the Feast of Saint Valentine, is celebrated annually on February 14. It originated as a Christian feast day honoring one or two early Christian martyrs named Saint Valentine and, through later folk traditions, has become a significant cultural, religious, and commercial celebration of romance and love in the whole world.

Tan Mahotsav is a National level festival organized on 18 to 27 February in Agra, UP. This festival invokes the memories of the old Mughal time and the nawab style prevalent in Uttar Pradesh in the 18th and 19th centuries. Almost all the big personalities of the country and huge crowds gathered here to organize the Taj Mahotsav.

Every year 28th February is observed as National Science Day. It is organized to mark the discovery of the Raman Effect by Indian physicist, Sir C V Raman on 28th February 1928. For his discovery, Sir C.V. Raman was awarded the Nobel Prize in Physics in 1930. This day aimed to create awareness of science and technology among people.

We hope this information on Important Days in February was helpful for you. If you want to read more informative articles like this then stay connected with sscadda.com. And if you want to read this article in Hindi then please click on the link given below.

Important Days in February In Hindi

Ans – World Cancer Day is celebrated on the 4th of February every year.