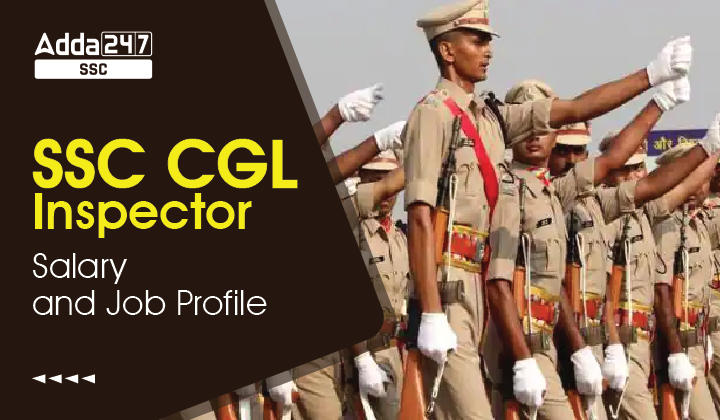 As you must be aware, Staff Selection Commission conducts CGL examination for the recruitment to several posts under the Central Government. Central Board of Indirect Taxes and Customs is one of the most preferred organizations to work after getting recruited through SSC CGL. There are 3 posts under CBIC which are responsible for the collection of Indirect Taxes. To become SSC CGL income tax inspector in CBIC at level 7, you can choose from the following posts:

SSC CGL income tax inspector salary, it is a group B under Level 7 that comes in the pay scale of Rs 44900 to 142400. The salary varies as per your posting. The total salary after becoming Inspector in CBIC will be around:

Although the three posts of CBIC work under the same department and are responsible for collecting taxes, these posts are quite different in every aspect from promotion to exposure. Compare these posts for a better understanding of job before filling preferences.

It is the most sought after job due to the following reasons:
Examiners everywhere has two types of posting –
(a) sensitive(Examination)
(b) non-sensitive (office).
Rotation between them is periodic. For example, in Mumbai Customs you will be posted in both postings for 6 months alternatively. It means if you are posted in-sensitive posting in April – October then you will be posted in office posting for October – April (This time period is different in different zones may be one year for sensitive or non-sensitive in some other zones)

Main Duty of an Examiner ssc cgl (according to booklet given at the time of joining) is to give clearances, he has the power to access and examine goods, the power to take samples, examine the cargo which needs to be imported or exported to other countries and then, levy the charges (duty) on that shipment. After examining the goods, examiner need to prepare lists, check market values of confiscated goods, loading and unloading of the goods whether generally or specifically, escorting goods from one Customs area to the other (especially in case of gold and other precious material), and any other customs work authorized to him by the Commissioner of Customs. Moreover, an examiner also needs to help the officers in Auctioning of Goods.

This is an all-time coastal job. You will be posted at any one of the cities according to your rank and preference and availability of seats. Cities/Zones are Mumbai, Chennai, Kolkata, Goa, Vizag, Kochi. This is not a uniform post.

One of the main reasons that it is considered to be the best job offered by SSC CGL Exam is faster promotions as compared to the other posts of CGLE. Once you are placed as an Examiner under CBIC (Central Board of Indirect taxes and Customs) you can expect an exceptionally well career growth.
The career progression can be seen in the following way. There is a qualifying period of 3 years for the promotion to the post of Appraiser; means he can’t be promoted to that post before completion of three years service as Examiner. There is a departmental exam for confirmation; without passing in that neither he can be made confirmed nor he can be promoted to the next post.
Promotion period differs from zone to zone since there is zonal seniority. For example, In Chennai zone the promotion to appraiser is fastest as of now, normally 3 and half years. In Mumbai it’s almost 5 years.

In the Examiner profile, you will remain only in the coastal region, so spouse ground for transfer will not work if you want the non-coastal transfer. Moreover, Examiner is liable to transfer anywhere in his custom zone. You may get temporary deputation (usually 1 year) to Northern India but otherwise would stay in coastal areas only.

Deputation to other departments is also very common. Apart from this, they are also posted in Customs Intelligence Agency like DRI (Directorate of Revenue Intelligence), where most of the personnel belong to Central Excise. Thus, Excise inspectors are the most experienced officers among Three Inspectors of CBIC.

Though not preferred by top rankers, it is famous among toppers when reappearing for getting a decent job in Home State. Many Examiners posted at coastal cities and Income Tax Inspector posted far from their home Town, leave their Jobs and join Excise as this post provide an opportunity to work near Home Town and they don’t have to top ranker for that.

The workload is not high but due to Biometric Attendance system, you will have to reach office on time. Earlier there was some sort of liberty.

First Promotion is to the Rank of Superintendents which is Gazetted Post. According to current rules, you will be eligible for promotion after 8 Years of Service, but there is a proposal to make it 3 years. The proposal is in the final stage of approval. The overall prospect of promotion was/ is gloomy but it will change fast if the new proposal is approved and implemented successfully.
Promotions in order are:
1. Superintendents (Group-B Gazetted)
2. Assistant Commissioner (Group A-IRS)
3. Deputy Commissioner
4. Joint Commissioner
5. Addl. Commissioner
6. Commissioner
You’ve to pass a departmental exam to get promotion but it is for “screening”, otherwise promotion is actually given based on your zonal seniority.
SSC CGL Cut Off | Comparison with Previous Years

This is a Uniform Job (Khaki with Ashoka Stambh on Chest and Three Stars on Shoulders) which is also a point of attraction for many, especially from aspirants from Rural Background where Khaki(Uniform) itself means Power and Prestige. But it’s optional to wear. It is wore on some special occasion like Republic Day.

Excise inspectors are posted at both sensitive and non-sensitive postings on rotation which is two years as per the latest rule. However, while posting at sensitive locations your work will be reviewed after one year and if you don’t perform there you will be transferred to another sensitive posting.
After the final selection from SSC, you will have option to choose/ prefer commissionerate which will be allocated to you according to your Rank. After you are allocated to any commissionerate there is no tenure system within commissionerate that means you will not be transferred to any other commissionerate unless you wish so or you are promoted. The transfer is also done on the ground of spouse.
SSC CGL Tier-II Cut Off Comparison, Check Now
Inspector (Preventive Officer)
Inspector (Preventive Officer) under CBIC is considered to be an adventurous and broadly classified job.  You are the first to interact with Assesses/Clients of the department.  This is a uniform post which makes it most attractive officer of CGL as the uniform is white (same as that of officers of Indian Navy) with Ashoka Stambha on Chest and with 2 yellow strips on the shoulders. You will have to wear the uniform while on duty on a regular basis. Social Recognition is also very high and can be considered a high-profile job as you will be posted at various International airports and Major sea Ports.

Normal working hours. May extend if required depending upon the workload. You will have to work in shifts as working hour at International Airport is 24*7. However, you will have to work for only 8 hours in a shift and if you stretch (do over time) you will be compensated well for that. Actually, most of the officers prefer to perform the duty of 12 hours in a shift so he can stay at home longer and avoid transport inconvenience.

This post lies in 6 zones only, namely Kolkata, Kochin, Chennai, Vishakhapatnam, Mumbai, and Goa.
There is a rotation for posting within the zone and you will be posted at both sensitive and Non-Sensitive Posts on the rotation basis. Sensitive posting is also called field posting. Rotation is done after 6 months at some places and after 1 year at some places.

First Promotion is to the Rank of Superintendents which is Gazetted Post. This takes around 8-10 years or even more. According to current rules, you will be eligible for promotion after 8 Years of Service, but there is a proposal to make it 3 years. The proposal is in the final stage of approval. The overall prospect of promotion was/ is gloomy but it will change fast if a new proposal is approved and implemented successfully.
You will have to pass the confirmation test in the first two years to get confirmed. It is very easy and there is almost 100% success rate in this. However, promotion is not based on any test but on Zonal Seniority.
Promotions in order are:
1. Superintendents (Group-B Gazetted)
2. Assistant Commissioner(IRS)
3. Deputy Commissioner
4. Joint Commissioner
5. Addl. Commissioner
6. Commissioner

After final selection from SSC you will be allocated a zone and your posting will be done at various offices/locations within the Zone only. You will not be transferred to another zone unless you wish so or you are promoted. Even if you wish to get yourself transferred to another zone it is not easy to get inter-zone transfers and it is up to the authority to transfer. Th authority will consider the availability of vacancies at the zone you applied for and many other factors come into light. However, there is some relaxation when it comes to transfer on Spouse ground and illness.
Training of PO is done at the Regional Training Institute of the respective Zone you will be selected for. Duration of training is of around 1 month.
We hope in this article you found what you were looking for and if you want to get more informative article on various topics then stay connected with sscadda.com. And if you want to read this article in Hindi then click on the link provided below.

What is the payscale of SSC CGL Inspector?

What is the Grade Pay of SSC CGL Inspector?

The Grade Pay of SSC CGL Inspector is Rs 4600