"Did you Know? In this pack you will get All new content we launch in the next 6 months"

About RRB NTPC Maha Pack:
RRB NTPC Maha Pack is a full-fledged course which incorporates all the essentials like Test series, Live Classes, Video courses & Ebooks & countless unprecedented features that will help you excel in the upcoming RRB NTPC exam. 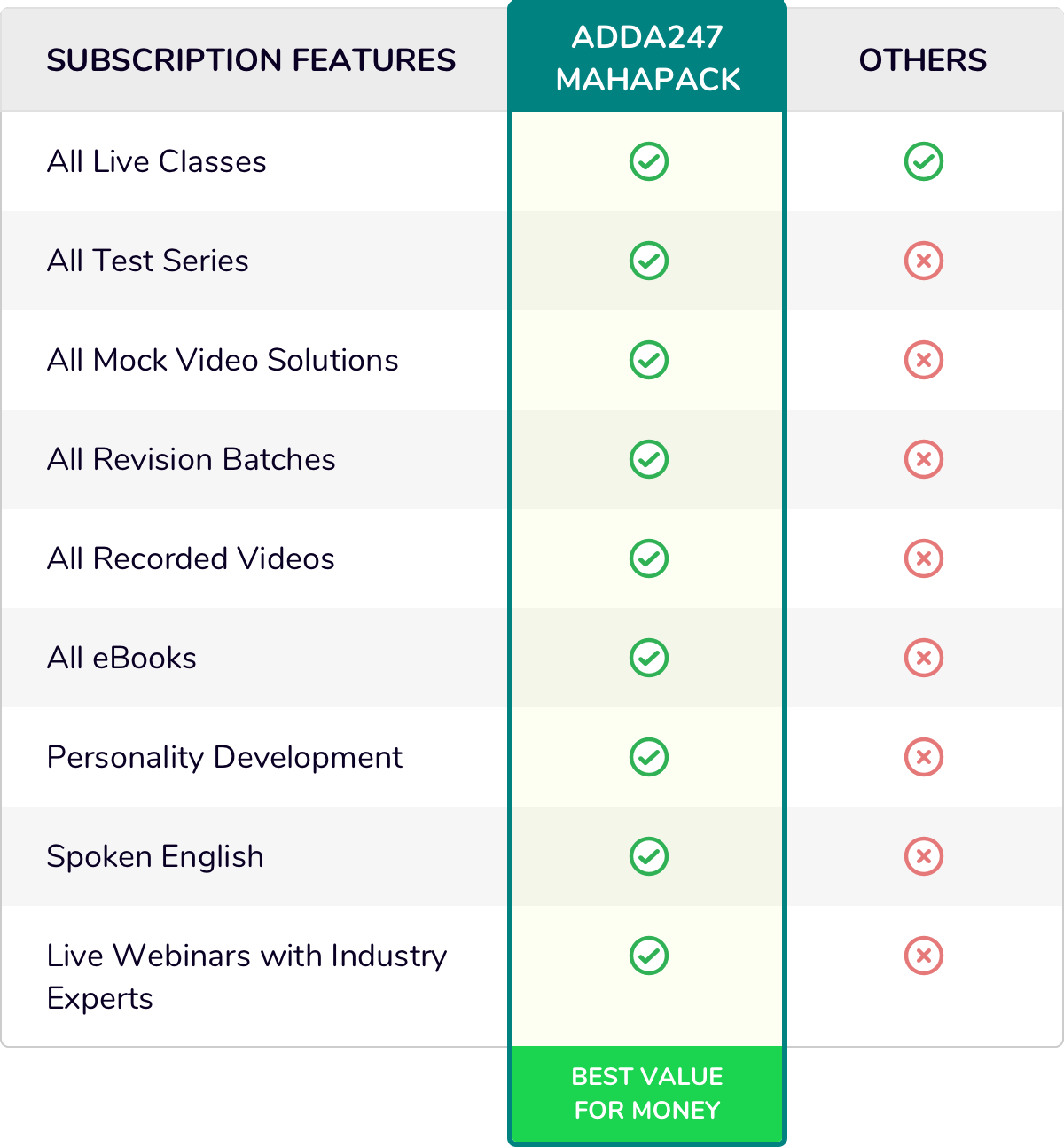 Railway Exams covered in this Pack:

Note: Live Classes will be taken by the Adda247 YouTube Faculties. The Batches of Super Educators are not part of the mahapack.
Note: For Online Live Class:
*You will get an mail after purchasing the batch for login in.
*You will get recorded video links within 48 working hours.
*No Refunds will be given in any case and registration can be canceled by Adda247 for any anti-batch activity.

RRB NTPC Syllabus Subject wise : The Questions will be of objective type with multiple choices and will include questions about the three topics namely General Awareness, Mathematics and General Intelligence and Reasoning.

The RRB NTPC stage 1 exam pattern contains 100 questions to be attempted in 90 minutes. The subject wise exam pattern is given below:

The topics included in stage 2 will be the same as that of stage 1 but with a different marking scheme. The RRB NTPC Syllabus 2020 following topics are comes in Stage 2:

Basic Elementary Science one of the most important subject for RRB NTPC Syllabus 2020: The Following Topics comes under Science Syllabus for RRB NTPC Exam

You can get the detailed syllabus for RRB NTPC on the website- sscadda.com.

Q. Is there negative marking in RRB NTPC?

1/3 marks are deducted as negative marking.

Q. What is RRB NTPC syllabus?

RRB NTPC syllabus comprises of all the topics from which questions are likely to be asked in the exam.

Q. What are the important topics in Maths section of RRB NTPC?

Some of the important topics for RRB NTPC Maths syllabus include Number System, Ratio and Proportions, Percentage, Mensuration, Time & Work, and Time & Distance.

Q. What are the important topics in General Intelligence and Reasoning section of RRB NTPC?

Some of the important topics for RRB NTPC General Intelligence and Reasoning syllabus consists of Mathematical Operations, Relationships, Analogies, Coding and Decoding, Analytical Reasoning and Syllogism.

Some of the important topics for RRB NTPC General Awareness syllabus consists of history, geography, polity, current affairs and science.

SSC JE Cut Off Out: Check SSC JE Paper I And...