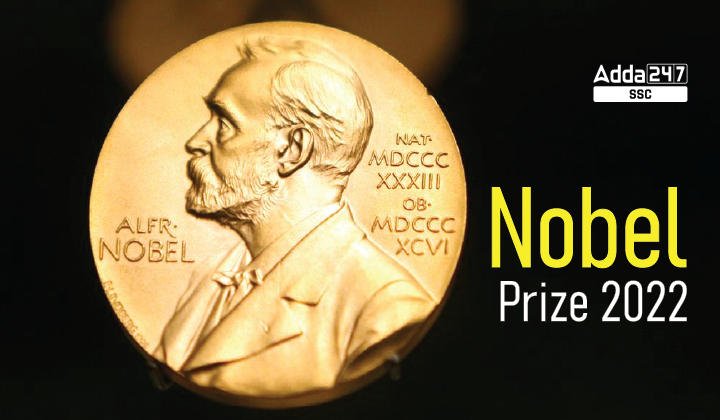 Nobel Prize comprises of five separate prizes which is awarded according to Alfred Nobel’s will of 1895 to “those who have conferred the greatest benefit to humankind.” Alfred Nobel was a Swedish chemist, engineer, and industrialist. He is famously known for the invention of dynamite. Nobel Prizes were first awarded in 1901.

It is awarded for contribution towards humankind in the areas of Physics, Chemistry, Physiology or Medicine, Literature, Economics and Peace.

These awards are presented by:

The Nobel Prize in Chemistry 2022 was awarded jointly to Carolyn R. Bertozzi, Morten Meldal and K. Barry Sharpless “for the development of click chemistry and biorthogonal chemistry”.

Frenchman Alain Aspect, American John F Clauser and Austrian Anton Zeilinger, jointly won the 2022 Nobel Prize in Physics for their work on quantum information science – a field with significant applications, including in encryption.

They found how unseen particles, like photons, can be linked or entangled with each other even when separated by great distances, a field that alarmed Albert Einstein, who described it in a letter as “spooky action at a distance.”

The 2022 Nobel prize in physiology or medicine has been awarded to geneticist Svante Pääbo for his discoveries concerning human evolution and the genomes of extinct human relatives. He pioneered methods to sequence ancient DNA by attempting to sequence Neanderthal mitochondria, the energy powerhouses of cells. He achieved this using a bone from a Neanderthal that lived 40,000 years ago.

French author Annie Ernaux won Nobel Prize 2022 in literature. She is known for her mostly autobiographical work, such as A Woman’s Story, A Man’s Place, and Simple Passion. She started her literary career in 1974.

Douglas W Diamond and Philip H Dybvi worked together to develop theoretical models explaining why banks exist, how their role in society makes them vulnerable to rumours about their impending collapse, and how society can lessen this vulnerability.

Ben Bernanke who is Former Federal Reserve chairman analysed the Great Depression of the 1930s, which is the worst economic crisis in modern history. Using historical sources and statistical methods, Bernanke’s analysis showed which factors were important in the drop in gross domestic product.

Cofounders of fact checking website Alt News Pratik Sinha and Mohammed Zubair and Indian author Harsh Mander are among the favorites to win this year’s Nobel Peace Prize. The prize will be announced tomorrow on 7th October in Norway.

Here are Indians who have been awarded with Nobel Prize.

Q. Who is the winner of Nobel Prize 2022 Chemistry?

Q. Nobel Prize 2022 Chemistry has been awarded for?

Ans. It has been awarded for the development of click chemistry and biorthogonal chemistry.

Q. Who has been awarded with Nobel Prize 2022 Medicine?

Ans. The 2022 Nobel prize in physiology or medicine has been awarded to geneticist Svante Pääbo.