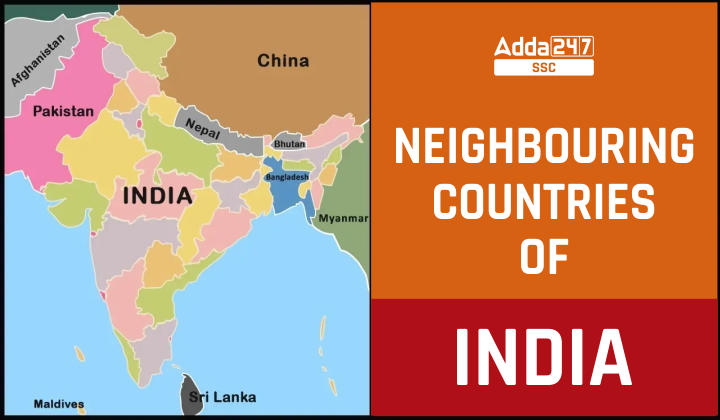 There are a total of 9 neighboring countries of India out of which 7 share their land borders. The list of states that share the borders with respective countries is given below.

Pakistan is located to the west of India and is one of the India border countries. Pakistan has a coastline along the Arabian Sea and the Gulf of Oman. The total land area of Pakistan is 7,96,095 sq km. The Indian states which share a border with Pakistan include Gujarat, Rajasthan and Punjab, and the Union Territory of Jammu and Kashmir. Pakistan separated from India after India got its independence from British rule. Pakistan celebrates its Independence Day on August 14, 1947. After the Independence, Pakistan was formed into two territories i.e. East Pakistan and West Pakistan. These two territories were geographically and culturally apart from each other. After a long conflict between these two, in 1971 a civil war occurred, as the result of which Bangladesh was formed. West Pakistan lying in the northwest of India became the Republic of Pakistan and East Pakistan became Bangladesh.

Afghanistan is also known as the Islamic Republic of Afghanistan in Central Asia. The total land area of Afghanistan spreads across 6,52,230 sq km and is known. Islam is the predominant religion in the country and the major dependence of the country’s economy is on Agriculture. Countries near India include industrial activities in Afghanistan including the manufacturing of cotton textile, woolens, woven carpets, and handicrafts. Pakistan-occupied Kashmir shares a border with Afghanistan.

The people’s Republic of China is located in East Asia and other Indian border countries. It is the most populous country in the world and also the 4th largest country in the world. The President of China is the head of the state. China lies to the north of India. Indian states that share their borders with China are Ladakh, Himachal Pradesh, Sikkim, Arunachal Pradesh, and Uttarakhand. China is one of the fastest-growing economies in the world. Both countries are connected by the Silk Road initiative and the exchange of Buddhism religion.

Nepal, officially known as the Federal Democratic Republic of Nepal is a landlocked country. Nepal is located to the north of India. In terms of area, Nepal is the 93rd largest country in terms of land with an area of 1,47,181 sq km. The capital of Nepal is Kathmandu which is also the largest city in the country. Nepal has eight of the ten tallest mountains in the world world, including the highest point on Earth, Mount Everest. Tourism is one of the biggest contributors to the country’s economy. Nepal shares borders with Uttarakhand, Uttar Pradesh, Sikkim, West Bengal, and Bihar.

Bhutan is situated to the north of India. It is officially known as The Kingdom of Bhutan and shares a border with the Indian states of Arunachal Pradesh, Sikkim, Assam, and West Bengal. It is also a landlocked country and has an area of 38,394 sq km. The capital of Bhutan is Thimphu. The country has a constitutional monarchy. The major contributors to the economy of the country are Hydropower, agriculture, forestry, and tourism. Bhutan is the smallest neighboring country of India.

Myanmar,  also known as Burma, officially known as The Republic of the Union of Myanmar is situated in East Asia. One of the neighbors of India Myanmar shares its border with the Indian states of Nagaland, Mizoram, Arunachal Pradesh, and Manipur. Myanmar has an area of  6,76,578 sq km and is the largest of the Mainland Southeast Asian states. Naypyidaw is the capital of Myanmar. The military is now back in charge and has declared a year-long state of emergency. Military commander-in-chief Min Aung Hlaing has taken power. He has long wielded significant political influence, successfully maintaining the power of the Tatmadaw – Myanmar’s military – even as the country moved towards democracy.

Sri Lanka officially known as the Democratic Socialist Republic of Sri Lanka lies near the southern area of India and is separated by Palk Strait. Sri Lanka has two capital, the commercial capital of the country is Colombo where on the other and Sri Jayewardenepura Kotte is its legislative capital of the country. The president is the chief of state and the head of government in the country.  It is located in the Indian Ocean to the southwest of the Bay of Bengal and to the southeast of the Arabian Sea. Being an island nation, Sri Lanka is a choice of many and makes a pleasant tourist destination in the world.

The Maldives is an island nation situated in the southwest of India officially the Republic of Maldives. Area wise it is one of the smallest countries in the world. It is spread over 298 sq km only.  The Maldives has more than a thousand coral islands. The Maldives is a presidential republic and the president is the head of the state. The capital of Maldives is Male.

Neighboring Countries of India and their Capitals

Which is the capital of and largest city of Sri Lanka?

Sri Jayawardenepura Kotte is the capital of Sri Lanka.

Who is the president of China?

Xi Jinping is the president of China.

How many states of India share the boundary with Bangladesh?

How many neighboring countries are there with India?

There are 9 neighboring countries of India.

Which country shares the longest boundary with India?