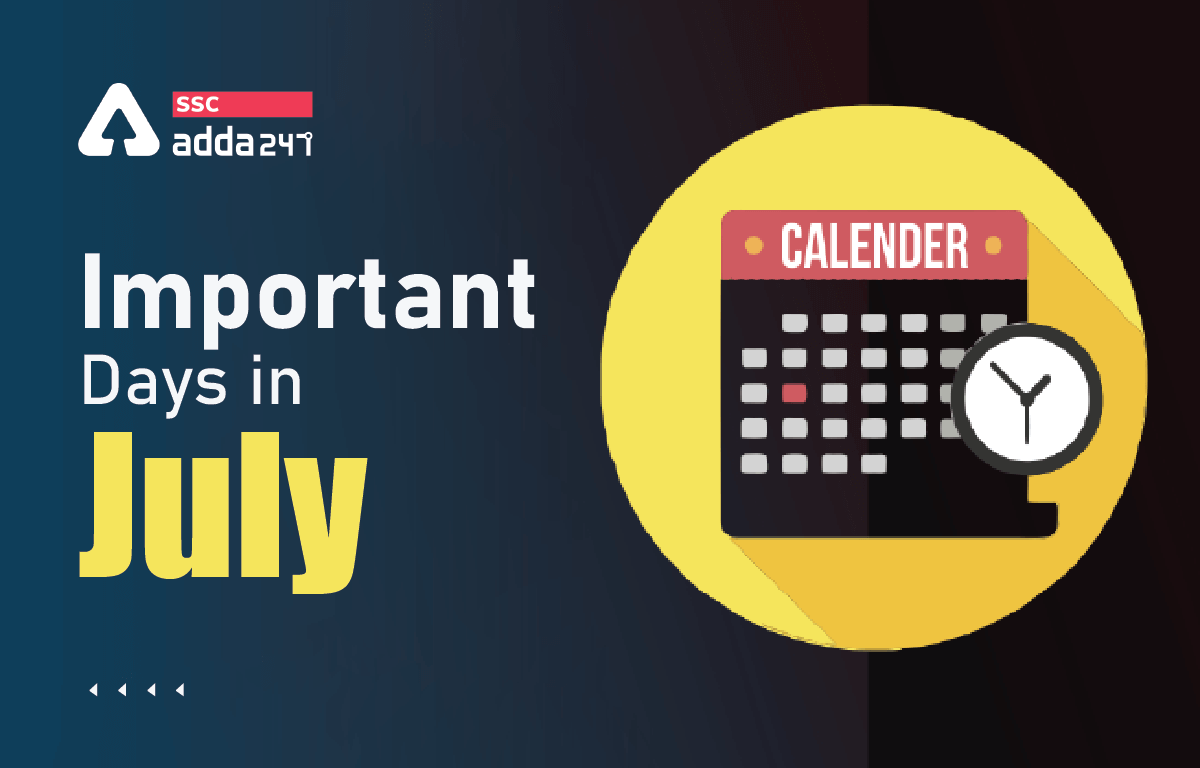 Important Days in July: In India, there are several festivals, occasions, and formal holidays that are celebrated every month. One can easily find diversity in every corner of the country, diversity in language, and regional rituals observed in every state.

Various events and festivals are celebrated in India with full enthusiasm and some events are of international importance too. There are many important days in July 2022 that candidates would want to know about. So are you looking for the list of important days celebrated in July? In July 2022, various international and national events are recognized and celebrated. We are providing you with the complete list of important days in July along with the significance of each day to help you understand it in a better way.

Every year in India on the 1st of July, National Doctor’s day is observed In India, to mark the importance of doctors hold in our lives and as a mark the importance of doctors in our lives.  This day is observed to honor the legendary physician and West Bengal’s 2nd Chief Minister, Dr. Bidhan Chandra Roy in the remembrance of his birthday. He was also honored with the highest civilian award Bharat Ratna.

It has been celebrated to mark the founding day of the ICAI since 1949. It is the nationally declared day for India. ICAI is The Institute of Chartered Accountants of India the national professional accounting body of India under the jurisdiction of the Ministry of Corporate Affairs, Government of India.

This day is celebrated to mark the importance of GST, which is the new Indian taxation system. GST stands for Goods and Service Tax. It is an indirect tax used in India on the supply of goods and services. It is a comprehensive, multistage, destination-based tax: comprehensive because it has subsumed almost all the indirect taxes except a few state taxes.

July 4th is celebrated as American Independence Day, a federal holiday been observed in the United States since 1941. July 4, 2022, Monday is the federal holiday this year. Independence Day is commonly associated with fireworks, parades, barbecues, carnivals, fairs, picnics, concerts, baseball games, family reunions, political speeches, ceremonies, with various other public and private events celebrating the history, government, and traditions of the United States. This day is the National Day of the United States.

World Zoonoses Day is observed every year on 6 July to emphasize and spread awareness about zoonotic disease amongst people and teach them to take the right action. Zoonoses is a disease that can be transmitted from animals to humans. According to reports, 2 out of every 3 infectious diseases in people originated within animals. The first vaccination against a zoonotic disease was administered by Louis Pasteur on 6 July 1885?

12th July is recognized as World Malala Day by the United Nations as it was on July 12, 2013, that Malala Yousafzai, a 16-year-old Pakistani girl engaged in promoting women’s education. She delivered an impassioned speech at the United Nations headquarters on the need for gender equality in education. 12th July is also the birthday of Malala Yousafzai and this day was declared by UN Malala Day.

Fifteenth July is celebrated as world youth skills day to encourage the youth to learn about vocational, and technical education, and training to become skilled professionals.

20th July is among the special days in July as it is celebrated to remember the founding of the International Chess Federation in Paris in 1924. The idea to celebrate this day as the international chess day was proposed by UNESCO, and it has been celebrated as such since 1966 after it was established by FIDE.

The 23rd of July is marked as Indian National Broadcasting day to remember when the first radio broadcast went on air on 23rd July 1927 from the Indian Broadcasting Company.

On this day in 1999, the Kargil War formally came to an end with Indian soldiers successfully recapturing mountain heights that were seized by Pakistani intruders. The country will be celebrating the 21st anniversary of the Kargil Vijay Diwas today. The Kargil war ended on 26th July which continued approx 60 days. This day is celebrated in the Kargil, Dras sector, and the national capital New Delhi.

Each year, 28 July is celebrated as World Hepatitis Day for raising global awareness about the virus Hepatitis and to vaccine individuals against the Hepatitis disease. The day was originated by World Health Organisation (WHO) in 2008. Earlier, it was declared to be celebrated on 19th May, but later on, in 2010, the date was changed to 28th July after the World Health Assembly decided to commemorate the birthday of Baruch Samuel Blumberg, an American physician who discovered hepatitis B.

World Nature Conservation Day is observed every year on 28 July to spread awareness that a healthy environment is a foundation for a stable and productive society and future generations. One must make efforts to protect, conserve and sustainably manage our natural resources. A healthy environment leads to a healthy lifestyle.

The US and the rest of the world celebrate this day as international friendship day to celebrate friendship bonds among people.

Some other auspicious days which is celebrated in India are as follows:

This day marks the start of the rath yatra festival when Lord Jagannath goes to his aunt’s house for seven days with his siblings on chariots. Ratha Yatra is a Hindu festival associated with Lord Jagannath held at Puri in the state of Odisha, India. It is the oldest Ratha Yatra taking place in India and the World, whose descriptions can be found in Brahma Purana, Padma Purana, and Skanda Purana, and Kapila Samhita. Every year the date varies according to some exact timing in 2022 it will happen on 1st July. Last year it was canceled due to a surge of Coronavirus all over the world.

Guru Purnima is celebrated to pay respect to the guru or guide in Hinduism or Buddhism. It is also among the auspicious days in July. Guru Purnima is a tradition dedicated to all the spiritual and academic Gurus, who are evolved or enlightened humans, ready to share their wisdom with very little or no monetary expectation, based on Karma Yoga. It is celebrated as a festival in India, Nepal, and Bhutan by the Hindus, Jains, and Buddhists