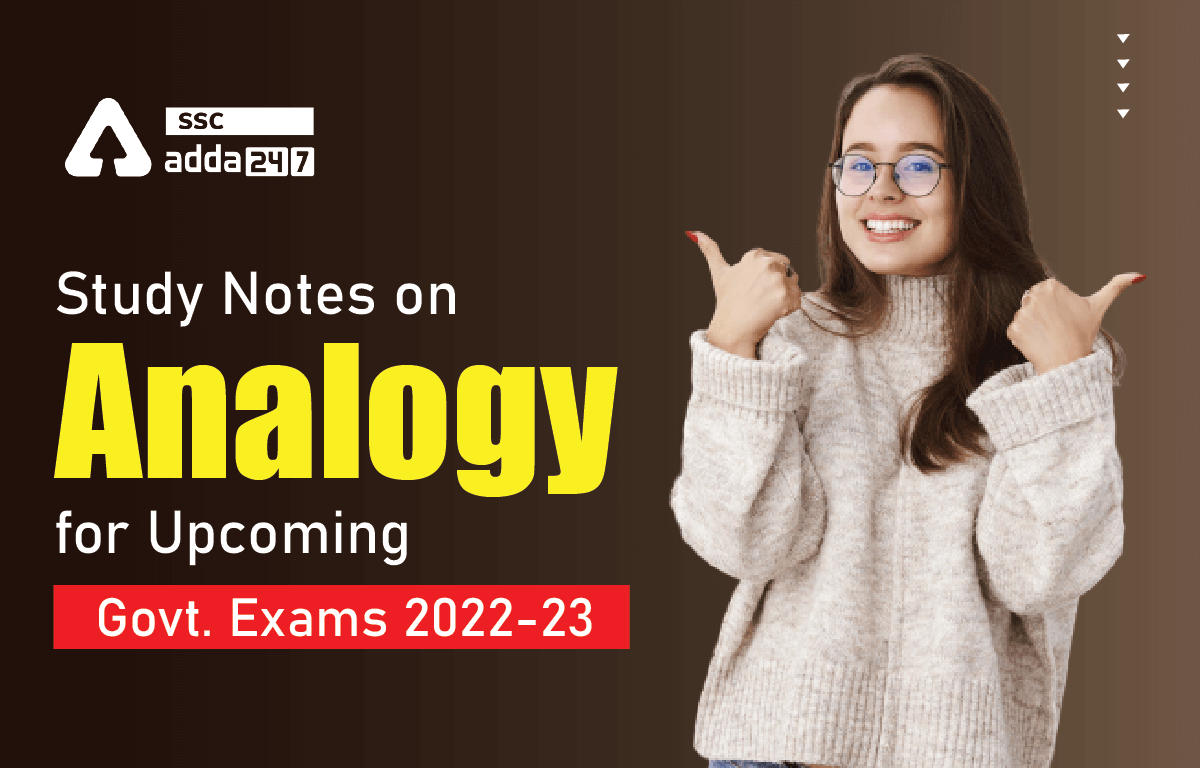 Analogy: Analogy is an important topic of logical reasoning and is asked in all the competitive exams like SSC, Railways, Banking, Defence, RBI, Teaching, etc. The concept of analogy refers basically to finding similarities in the given entities. When the four or any entities are given then they are related to each other by following a certain relationship to each other, we need to find their relationship and answer the next term logically.

Analogy requires a logical understanding of students and broad knowledge of every section. It observes the logical understanding and ability of candidates. The questions will be formed in analogy from any subject including General Knowledge/Awareness, Science, Computer, Environment, Current Events, Mathematics, etc. So the candidates must prepare an Analogy well and prepare it seriously as it has the weightage of nearly 3 to 5 marks in every exam. Read the full article to know the analogy concept, the meaning of analogy, types, questions, etc.

The analogy is an important topic of reasoning that comes under the logical reasoning section. It has many types and the questions will be formed in all such types. The types of analogy are mentioned below.

In this type of analogy, a pair of letters or words are given and have certain fixed logical similarities between them. As per this pair relationship, another pair of letters or words is also formed in which one word or letter is given and we need to find an unknown letter or word that comes there as per the logical relation following in the first pair. It contains questions based on the position of letters, opposite letters, synonyms and antonyms of words, etc. The candidates need to understand the logic followed in the first given pair and then find the next pair followed the same logic. The examples of letter/word-based analogy are mentioned here.

In D and F there is a difference of two then the unknown letter by T. Now the series will be D : F: : R: T 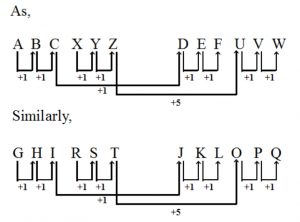 so the answer is JKLOPQ

In this type of analogy, a pair of numbers is given which is related in a certain manner and we need to find the unknown number following the same logic followed in the given pair. The questions will be formed in a number-based analogy based on the basic mathematical operations of numbers like addition, subtraction, multiplication, and division. Apart from this, the questions are also firmed based on squares and cubes of numbers, etc. The examples of number-based analogy are discussed here.

In this type of analogy, the questions will be formed on both words/letters and numbers. It is also known as a mixed analogy. The candidate first needs to understand the relation of logic by which letters or words and numbers are related to each other and followed the sand logic the unknown number and letters or words need to be found. The examples of mixed analogy are shown here.

In this type of analogy figures and images are given and have certain similarities between them. The candidates need to mark the logic followed in the given pair of images and predict the new unknown image using this logic. The questions will be formed on mirror images, water images, and rotation of figures in clockwise and anti-clockwise directions. The candidates need to answer the resultant figure based on the relationship or logic followed in the given pair. The examples of image-based analogy are discussed here for a better understanding of candidates.

In this type of analogy, the questions will be formed on any logic or relationship. In this type, the questions are asked from any subject or section like General Knowledge, General Awareness, Current Affairs, Science and Technology, Mathematics, etc. The candidates must know all these sections well to answer these questions. It requires more and more practice.

Analogy in reasoning is a broad section that requires some useful tips and tricks to prepare for the exams. Analogy reasoning tricks help to develop the logical ability of candidates and their observation level. Here we are going to discuss some useful tips and tricks which are helpful in your preparation for exams. So follow these tips to prepare analogy well for your exams.

The reasoning is a very interesting subject and important for all the exams. The reasoning can be understood only by practice and logical ability. Reasoning by analogy helps students to understand their logical abilities and observations. Analogy numbers are related to each other by following a certain mathematical relationship. Analogy number requires a good knowledge of numbers and their operations. Reasoning by analogy needs the understanding of facts and figures in all the sections.

We hope these important notes on Analogy were helpful for you and will help you to prepare for your upcoming exam. If you want to get some more study notes like this then we suggest you to stay connected with sscadda.com. And if you want to read these notes in Hindi then click on the link provided below.

Ans – Analogy refers to similarity. In analogy, the pair of terms are given and they are related to following certain logical relationships. Based on this relationship we need to answer the unknown terms.

Ans – By observing the given pair it is found that the second number is the square of the first number so, in the same manner, the answer will be the square of 13 i.e. 169.

Do Check These Links Too:-