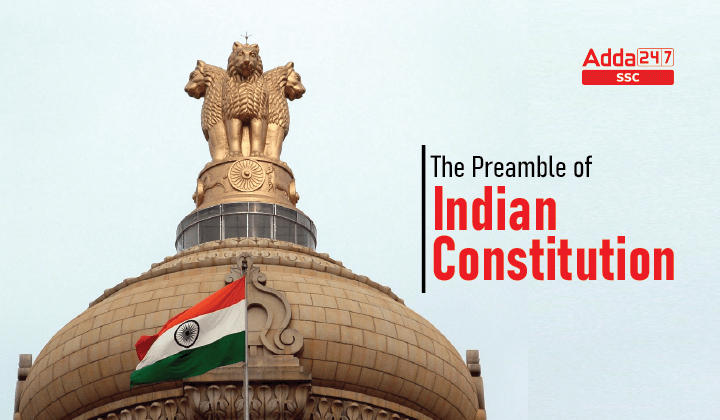 WE, THE PEOPLE OF INDIA, having solemnly resolved to constitute India into a SOVEREIGN SOCIALIST SECULAR DEMOCRATIC REPUBLIC and to secure to all its citizens:
JUSTICE, social, economic and political; LIBERTY of thought, expression, belief, faith and worship;
EQUALITY of status and of opportunity;
and to promote among them all FRATERNITY assuring the dignity of the individual and the unity and integrity of the Nation;
IN OUR CONSTITUENT ASSEMBLY this twenty-sixth day of November, 1949, do HEREBY ADOPT, ENACT AND GIVE TO OURSELVES THIS CONSTITUTION

Preamble of Indian Constitution in Hindi

A preamble is an introductory statement in a document that seeks to explain the document’s philosophy and objectives.
It presents the intention of framers of the constitution, and the core values and principles of the nation.
The preamble of India basically gives idea of the following objects:

As of now, the preamble is only amended once through the 42nd Amendment Act, 1976.

Q. What are the 5 keywords of the Preamble?

Ans. The 5 keywords of the Preamble are: Sovereign, Socialist, Secular, Democratic and Republic. These words shows nature of Indian State.

Q. Objective resolution which forms the basis of Indian Preamble was moved by?

Q. What are the objectives mentioned in the Indian Preamble?