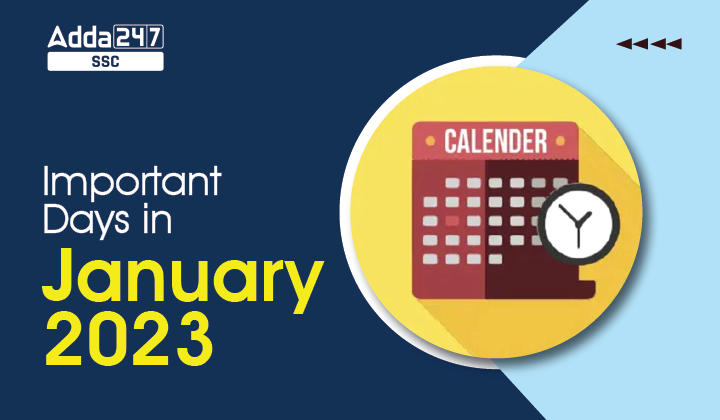 Important Days in January 2023: January is the first month of the year in Gregorian calendars (followed by most of the World) and the first of seven months to have a length of 31 days. It is also known as New Year’s Day. January is named after the “god of beginnings and transitions”, “Janus” according to Roman Mythology. January is the winter month that brings the new year with new opportunities, new things, new abilities, new resolutions, and much more. Let us go through the important national and international days that fall in the month of January 2023.

Candidates must check the list of national and international important days in January 2023. The following details can help candidates for the various competitive exams conducted by the Government for recruitment. 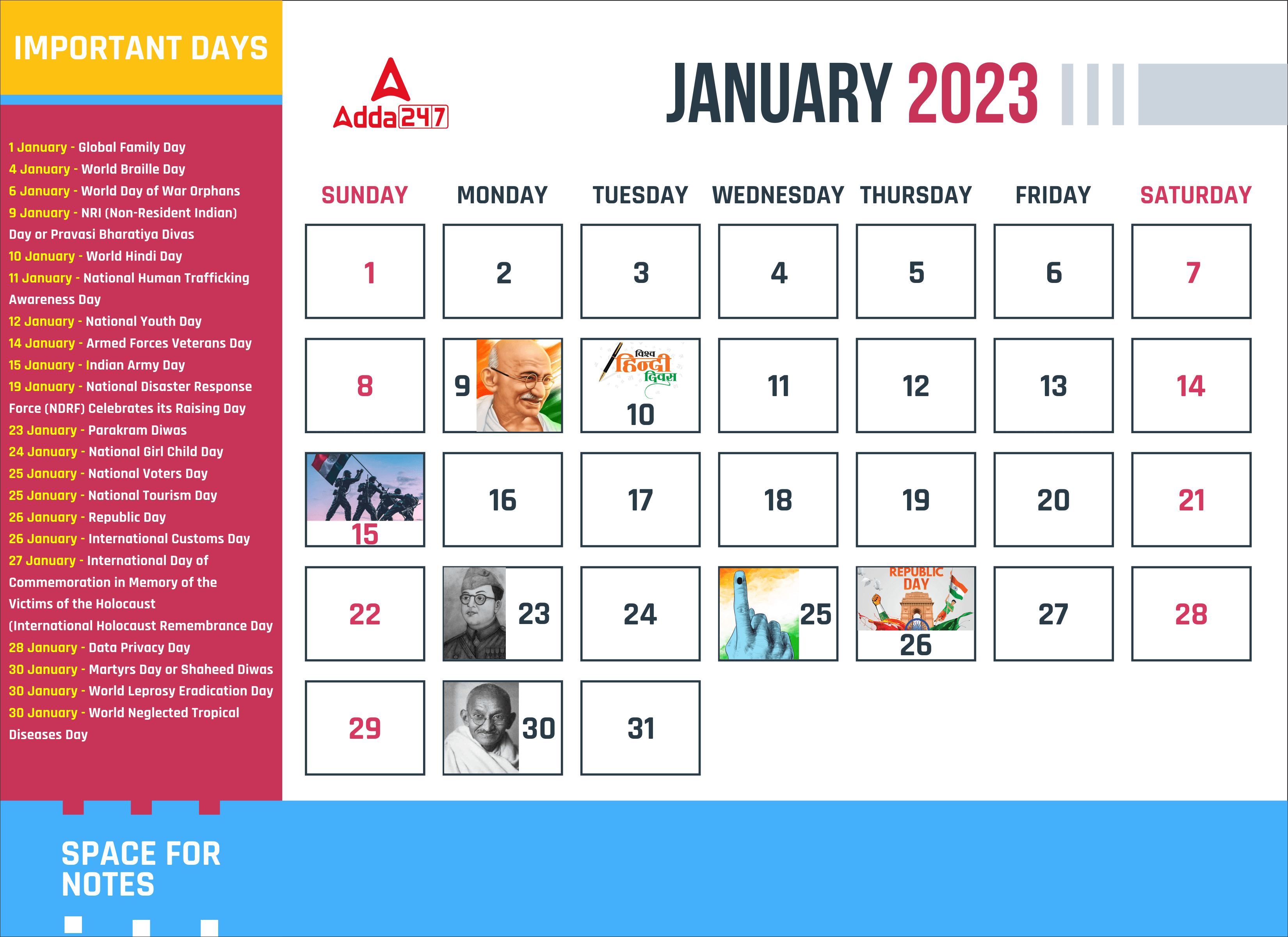 Important Days in January 2023 and its Significance

It is celebrated as a day of peace and sharing. Its aim is to unite and spread a message of peace by considering and promoting the idea that Earth is one Global Family so as to make the world a better place to live for everyone.

It is observed on January 4th  to honor the birth of Louis Braille. It is observed to raise awareness about how Braille plays a significant role in the complete realization of human rights in the lives of blind and partially sighted people.

On 6th January every year, World Day of War Orphans is celebrated to create awareness about the plight of war orphans and to address the traumatic conditions faced by them.

South African Native National Congress (SANNC) was founded on 8 January 1912 by John Langalibalele Dube in Bloemfontein. Behind this, the primary motive was to give voting rights to black and mixed-race Africans or to unite African people and spearhead the struggle for fundamental political, social, and economic change.

NRI or Pravasi Bharatiya Divas is observed every year on 9 January to mark the contribution of the overseas Indian community towards the development of India. This day also commemorates the return of Mahatma Gandhi from South Africa to Mumbai on 9 January 1915.

This day is celebrated every year on  10th January. The main objective is to create a suitable environment for the promotion of Hindi worldwide and to present Hindi as the prevalent language of the world.

World Laughter Day was established in 1998 and the first celebration was on 10 May 1998, in Mumbai, India, arranged by Dr. Madan Kataria, founder of the worldwide Laughter Yoga movement

He was the second Prime Minister of Independent India. He promoted the slogan ‘Jai Jawan Jai Kisan’ He actively participated in India’s freedom struggle. Due to cardiac arrest, he died on 11 January 1966.

The birth anniversary of Swami Vivekananda also called Swami Vivekananda Jayanti is celebrated every year on 12 January. He was born on 12th  January 1863. The government had decided to observe it as National Youth Day because the philosophy of Swamiji and the ideals for which he lived and worked could be a great source of inspiration for the Indian Youth. He had given a speech at the Parliament of the World’s Religions in Chicago and glorified India’s name.

Makar Sankranti or Uttarayan or Maghi or simply Sankranti, also known in Bangladesh as Poush Sankranti, is a harvest festival day in the Hindu calendar, dedicated to the deity Surya (sun). It is observed each year the day Sun enters the Capricorn zodiac which corresponds with the month of January as per the Gregorian calendar. It marks the first day of the sun’s transit into Makara Rashi.

Netaji Subhash Chandra Bose was born on 23rd January 1897 in Cuttack, Orissa. He was one of the most prominent Indian freedom fighters. His army was known as Indian National Army (INA) or Azad Hind Fauj. He also led an Indian national force from abroad against the Western powers during World War II.

On 24th January every year, National Girl Child Day is celebrated to highlight the inequalities faced by a majority of the girls in India, the importance of education, nutrition, legal rights, medical care and safety of girl children, etc.

Every year on 25th January National Voter’s Day or Rashtriya Matdata Diwas is celebrated to encourage young voters to take part in the political process. In 2011 the first time this day was celebrated to mark Election Commission’s Foundation Day.

Every year on 25th January National Tourism Day is celebrated in India to raise awareness and educate people about the importance of tourism and the role it plays in the Indian economy.

On 26th November 1949, the Indian Constituent Assembly adopted the Constitution the supreme law of the land and replaced the Government of India Act of 1935. It came into effect on 26th January 1950 with a democratic government system. This day marks the largest parade that took place at Rajpath, Delhi every year.

International Customs Day (ICD) is celebrated every year on 26 January by Customs Organisation to recognize the role of customs officials and agencies in maintaining border security.

Lala Lajpat Rai was born on 28th January 1865 in Punjab. He was a prominent nationalist leader who played an important role in India’s struggle for freedom. He also earned the title of ‘Punjab Kesari’ or ‘the Lion of Punjab’. He initiated the foundation of the Punjab National Bank. He died on 17th November 1928, due to serious injuries. The University of Veterinary and Animal Sciences in Hisar, Haryana is named after Lala Lajpat Rai.

30th January is celebrated as Martyr’s Day or Shaheed Diwas every year in memory of Mahatma Gandhi and the sacrifice of three revolutionaries of India. As, of 30th January 1948, the ‘Father of Nation’ was assassinated. And on 23rd March 3 heroes namely Bhagat Singh, Shivaram Rajguru, and Sukhdev Thapar of the nation were hanged to death by the British.

World Leprosy Day is observed on the last Sunday of January to focus on the target of zero cases of leprosy-related disabilities in children. As we know that disabilities do not occur overnight but happen after a prolonged period of undiagnosed disease.

What is celebrated on 14 january?

Makar Sankranti is celebrated on 14 January.

Where can I get the list of Important Days in January 2023?

The list of all the important national and international days is mentioned in the above article.