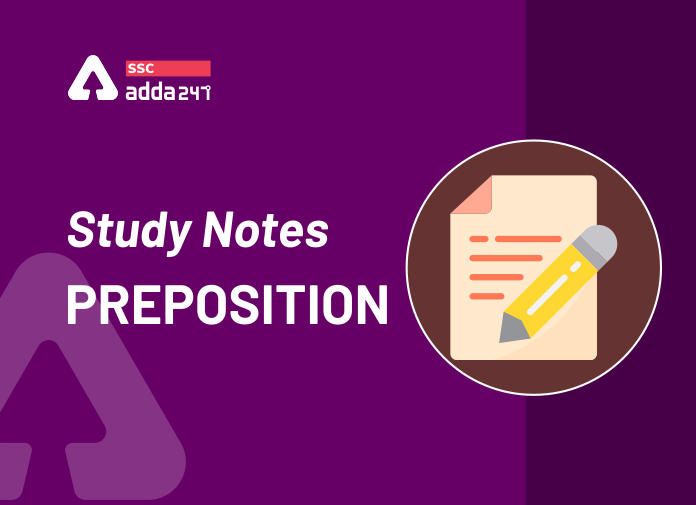 Study Notes on Preposition: Types, Rules, Usage and Examples are provided in this post. English Language section is one of the most important sections and is part of almost every Government Examination be it SSC, Bank, Railway or any other exams. English is an important part not just of our professional but also of our indigenous life. Due to various reasons, a large number of aspirants are afraid of this mandatory subject when the truth is, it is just a subject with few grammar rules and a collection of vocabulary. In this article, we’ll cover all the important rules, types and different aspects of an integral part of English grammar i.e Preposition.

What is a Preposition?

Rule 1 A preposition cannot be followed by a verb. Verb placed immediately after preposition must be in gerund form.

Examples (a) He prevented me from drinking hot water.
(b) He insists on trying once again.

Examples (a)  May I know who were you talking to?
(b) What are you thinking of?
It used to be thought as ungrammatical, to end a sentence with a preposition, but it is now well accepted.

Examples (a) Here is the magazine that you asked for.
(b) This is the dish that she is fond of.

Examples (a) This is a good hotel to stay at.
(b) I need a pencil to write with.

Rule 5. In some sentences, preposition is attached with the verb.

Examples (a) I hate being laughed at.
(b) This I insist on.

Rule 6. In interrogative sentences preposition comes in the beginning.

Examples (a) By which train did you come?
(b) For whom was instructions given?

Use and examples of Some Important Prepositions

In reference of ‘Time’

In reference of ‘Place’

(A) At shows stationary position or existing state while In shows movement.
Examples i. She is at home.
ii. The train is in motion.

(B) At for small place, town etc. while In for big place, town, city, country etc.
Examples i. He lives at Alwar in Rajasthan.
ii. A temple is situated at Madurai in Chennai.

(D) In/Into In shows the existing state of things, while Into shows movement.
Examples i. He jumped into the river.
ii. There are three students in the class.

On can be used for both existing position and movement.
Example (a) He was sitting on his bag.
(b) Snow fell on the hills.On can also be used as an adverb
Examples (a) Go on.
(b) Come on.Onto is used when there is movement involving a change of level.
Examples (a) People climbed onto their roofs.
(b) He lifted her onto the table.With/ByWith is used for instruments, and By is used for agents.
Examples (a) The snake was killed by him with a stick.
(b) The letter was written by Suresh with a pencil.Since/For/FromSince is often used with Present Perfect or Past Perfect Tense
Examples (a) It has been raining since two O’Clock.
(b) He had been ill since Monday.Since can also be used as an adverb
Examples (a) He left school in 1983. I haven’t seen him since.
(b) It is two years since I last saw Tom.
Beside/BesidesBeside and Besides have altogether different meanings.
Don’t confuse beside with besides. beside = at the side of
Example: a)He was sitting beside Sarla.b) besides = in addition to / as well asExample

Between is normally used for ‘two things or persons, but it can also be used more, when we have a definite number in mind and there is a close relationship/ association within them.
Example

Among is usually used for more than two persons or things when we have no definite number in mind.

Both have the same meaning. Either of them can be used if followed by ‘the’. If followed by a word, beginning with a vowel ‘amongst’ be used.
Examples