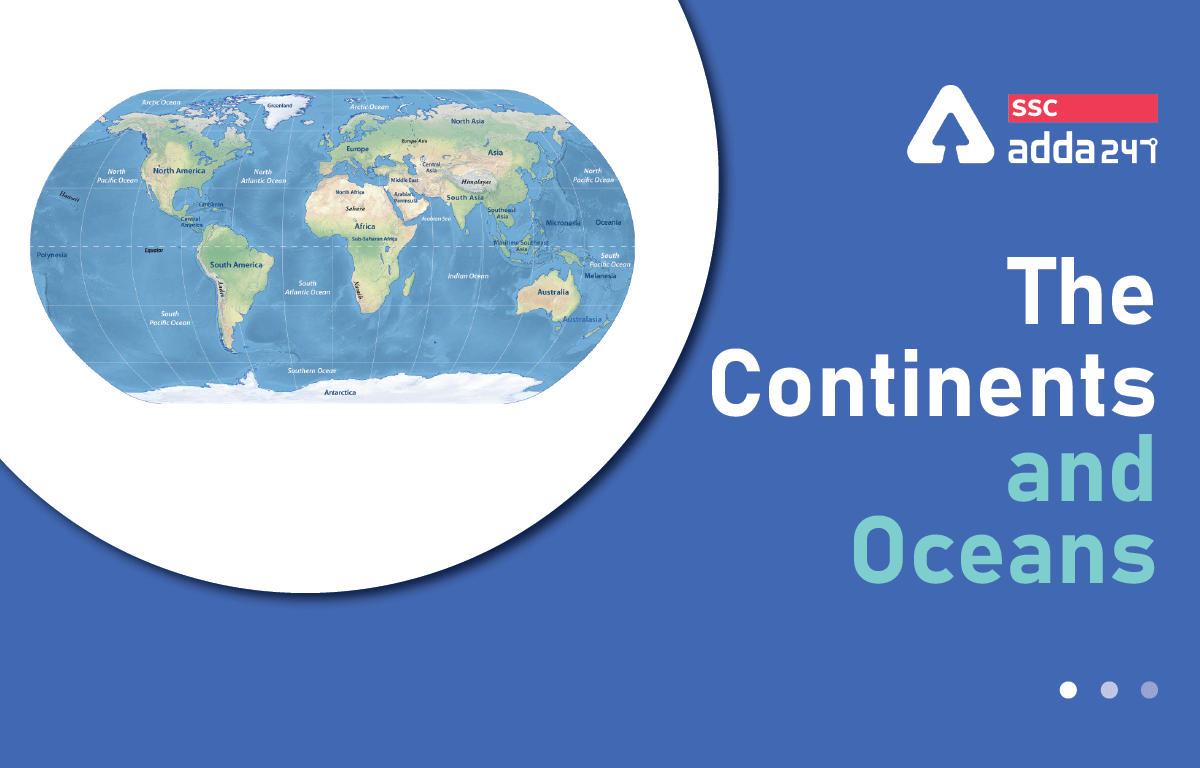 Continents and Oceans: There are 7 continents and 5 oceans in the world. To understand the planet Earth it is important to learn about the 7 Continents and 5 Oceans. Out of the total earth’s surface, 21% is under the Continent and 72% is under Ocean. In terms of land area, Asia is the largest continent among all and the Oceanic is the smallest. The Pacific Ocean is the largest ocean in the world. It is nearly two times larger than the second-largest ocean.

What is the Continent?

A continent is any of several large landmasses which are separated by an ocean or other landmass. Continents are divided into 7 different regions namely, Asia, North America, Antarctica, South America, Europe, Africa, and Australia. Many of the island countries are surrounded by the Pacific Ocean which together forms the continent of Australia, and that region is geographically called Oceania. According to geology, a continent can be defined as “Earth’s major landmass that includes dry mass and the Continental shelves both.

An Ocean is referred to as a salty water body that covers 71% of the Earth’s surface. In other words, it can be defined as a very large body of water due to which the greater ocean has been divided. There are five different oceans: the Pacific Ocean, the Atlantic Ocean, the Indian Ocean, the Arctic Ocean, and the Southern Ocean. The Pacific Ocean is the largest Ocean in the world. The Pacific Ocean also contains the Mariana Trench, which is the deepest known part of the world’s oceans. Its deepest point reaches seven miles down into the Earth

There are 7 continents on the planet earth. Asia is the largest continent among all the seven continents.

Asia is the largest continent on the earth with a land area of 17,210,000 square miles or 44,029,797 square kilometers, Asia occupies about 9% of our planet’s surface. It is the most populated continent on the earth i.e. around 60% of the population is surviving on it. Asia is one of the most important countries in terms of the world’s economy. The largest city in Asia is the largest city on Earth also which is Tokyo, Japan.

Africa is the second continent on the planet both in terms of area and population. It is estimated that about 15% of the world’s population currently lives in Africa. The African continent has a landmass of 11,670,0000 square miles or 28,489,869 square kilometers.

Australia (also sometimes known as Oceania) is located between the Indian Ocean to the East and the Pacific Ocean to the West. In Australia, the largest city is Sydney which, as of 2016, has a population of 5,029,768. Other large cities in Australia include Melbourne, Victoria; Brisbane, Queensland; Auckland, New Zealand; and Perth, Western Australia. This continent has a land area of 2,970,000 square miles or 5,179,976 square kilometers

North America has a land area of 9,540,000 square miles or 23,309,892 square kilometers. As of 2016, its population is 579,014,000. This population is spread over 23 different countries including three that occupy vast lands, such as Canada, The United States, and Mexico. Around 8% of the world’s population lives in this landmass, which is approximately 17% of the planet’s landmass.

This continent is the southern area of the landmass it shares with North America. Like North America, South America borders the Atlantic Ocean to the West and the Pacific to the East. There are only twelve independent nations in South America. Brazil is the biggest country on the continent with the largest population of them all.

There are 5 oceans which is the source of saltwater. The list of the 5 oceans is now as follows:

The Pacific Ocean is the largest ocean among all the oceans on the earth. This ocean covers an area of 63,784,077 square miles or 165,200,000 square kilometers. The Pacific ocean covers the whole area between the eastern coasts of two continents: Australia (Oceania) and Asia, all the way to the west coasts of North and South America.

The Atlantic Ocean includes many seas, such as the Baltic, the Caribbean, the Gulf of Mexico, and the Mediterranean seas with an area of 41,081,270 square miles or 106,400,000 square kilometers, the Atlantic is the second-largest ocean on Earth behind the Pacific.

The Indian Ocean covers an area of 28,400,130 square miles or 73,556,000 square kilometers. The Indian Ocean has been fundamental in the trade between Europe and Asia. Western (and, indeed, global) medicine and food preservation have greatly progressed thanks to the amazing spices that are found in the countries around the Indian Ocean, including its many islands.

The Southern Ocean is the “youngest” ocean on Earth, as it was only considered as such in the year 2000. The area covered by the Southern Ocean is 7,848,299 square miles or 20,327,000 square kilometers. This makes it the penultimate ocean in terms of size only in front of the Arctic Ocean.

Continents and Oceans on World Map

What is the Difference Between Continent and Ocean?

The below table will show you some points which help you understand the difference between the continent and the ocean.

The Continent and Ocean: FAQ

Q. Which is the largest ocean on the Planet Earth?

Ans: The Pacific Ocean is the largest ocean on planet Earth.

Q. Which is the largest Continent on the Planet Earth?

Ans: Asia is the largest continent on planet Earth.

Q. What percent of the land is covered by continent on Earth?

Ans: 21% of the land is covered by continents on the earth.

Q. How many continents and oceans are there in the world?

Ans: There are 7 continents and 5 oceans in the world.