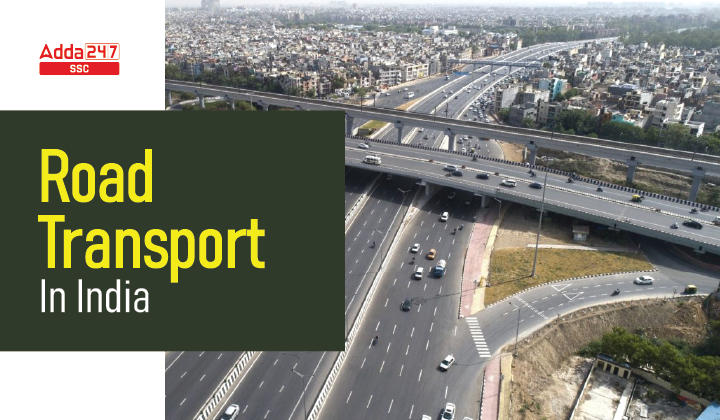 Road Transport is considered to be among the most cost effective and preferred mode of transport, both for freight and passengers. Development of road had been a result of and has contributed to emergence of modern India. It is vital for economic development and social integration of the country. The Road Transport Sector accounts for about 87% of passenger traffic and 60% of freight traffic movement in the country. It has deeply penetrated throughout the country. Easy availability, adaptability to individual needs and the cost savings are some of the factors which gives edge to road transport. It also serves as a feeder service to railway, shipping and air traffic.

The formulation of broad policies relating to regulation of road transport in the country is done by Ministry of Road Transport.

It is also concerned with improving the road safety scenario in the country. Roads in India comprises of National Highways, State Highways and district roads, village roads and border roads.

(iii) Engineering (roads as well as vehicles) and

(iv) Emergency care to deliberate in detail and submit their recommendations on short-term and long term measures to curb road accidents in the country.

The Government aims to construct 65,000 kms of national highways at a cost of Rs. 5.35 lakh crore by 2022. Under the Union Budget 2022-23, the Government of India has allocated Rs. 199,107.71 crore (US$ 26.04 billion) to the Ministry of Road Transport and Highways. National Investment and Infrastructure Fund (NIIF) is making progress towards integrating its road and highway portfolio.

India’s Gati Shakti program has identified a list of 81 high impact projects, out of which road infrastructure projects were the top priority. The major road projects include the Delhi-Mumbai expressway (1,350 kilometres), Amritsar-Jamnagar expressway (1,257 kilometres) and Saharanpur-Dehradun expressway (210 kilometres).

In India, railway is the most important form of transport system. The first railway line was laid by Britishers between Bombay and Thane in 1853. Rail transport has developed a lot since then. At present government is focusing on modernization of Rail Transport as a whole. Certain recent steps focused on modernization of railways include introduction of Vande Bharat train, KAVACH system, Bullet train etc.

It provides connectivity to long distances. It comprises of domestic airways and international airways. Government initiative of UDAN has given a new boost to airways in India.

Q. How much money is allocated to Ministry of Road Transport and Highways in Union budget 2022-23?

Q. NHAI aims to construct how many KMs of National Highways in 2022-23?