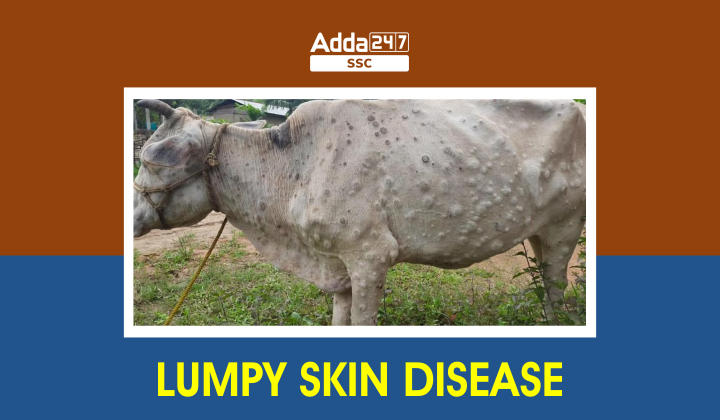 States like Gujarat and Rajasthan have been battling the outbreak of Lumpy Skin Disease (LSD), a viral infection of cattle.
It has also spread to other states including Punjab, Himachal Pradesh, Andaman & Nicobar and Uttarakhand.

Lumpy Skin Disease is caused by the lumpy skin disease virus (LSDV), which is a virus of the Capri poxvirus genus. Sheeppox virus and goatpox virus are the other members of the genus Capri poxvirus. The LSDV mainly affects cattle — cow and its progeny, and the Asian water buffaloes.

According to a 2021 report of the Food and Agriculture Organisation (FAO), Lumpy Skin Disease outbreaks occur in epidemics several years apart. The existence of a specific reservoir for the virus is not known, nor is it known as to how and where the virus survives between epidemics.

The LSDV spreads through blood-sucking vectors like ticks and mites like houseflies, mosquitoes, etc.
It also spreads through contaminated water, fodder and feed. Scientists have been advising isolation of infected animals from the healthy ones in an attempt to contain the spread of the virus. However, there is a problem of feral cattle in India and scientists say these free-ranging cattle could also be a reason for rapid spread of LSD.

Since the first LSD case was reported in April this year in Kutch, the disease has spread to 26 of Gujarat’s 33 districts. It has infected thousands of cattle in Gujarat and Rajasthan.

LSDV attacks the circulatory system of an animal and causes vasculitis or inflammation of blood vessels and lesions in various organs like liver, lungs, spleen, lymph nodes etc. In turn, it causes epidermis, outer surface of the skin, to get separated from the inner layer of the skin.
Fever, increased mucus secretion, loss of appetite etc are among other symptoms.
Emerging evidence suggests that the LSD virus can also cause mild illness in buffalo, camels, deer and horses.

The Gujarat government has been ring-vaccinating healthy cattle heads in the five-km radius of an outbreak by administering them goat pox vaccine.
There is no specific cure once an animal contracts the virus and therefore vaccination is the most effective tool available as of now.
Animal husbandry department has been providing free treatment to infected cattle. The government has facilitated setting up isolation centres for feral cattle in urban areas and set up a task force to address the issue.

ICAR have developed an indigenous vaccine for Lumpy Skin Disease in cattle which has spread across many States in the last few months.
ICAR-National Research Centre on Equines (ICAR-NRCE), Hisar (Haryana), in collaboration with ICAR-Indian Veterinary Research Institute (IVRI), Izatnagar, Uttar Pradesh has developed a homologous live-attenuated LSD vaccine “Lumpi-ProVacInd”.
Scientists were making efforts to develop this vaccine since the LSD disease was first reported in Odisha in 2019.

Q. Does it affects only Cows and Buffalos?
Ans. No, it can cause mild illness in camels, deer and horses as well.

In which State Lumpy Skin Disease was reported first time in India?

Does it affects only Cows and Buffalos?

No, it can cause mild illness in camels, deer and horses as well.