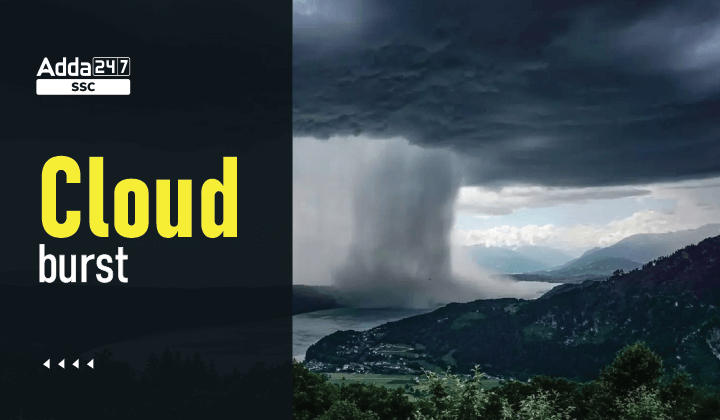 What is cloud burst?

A cloudburst is a localized but intense rainfall activity. A cloudburst is an extreme amount of precipitation in a short period of time, sometimes accompanied by hail and thunder, which is capable of creating flood conditions. Cloudbursts can quickly dump large amounts of water, e.g. 25 mm of precipitation corresponds to 25,000 metric tons per square kilometer.

Cloudbursts are not very frequent as they occur only via orographic lift or occasionally when a warm air parcel mixes with cooler air, resulting in sudden condensation. Rainfall of 10 cm or more in an hour over a roughly 10 km x 10-km area is classified as a cloudburst event. By this definition, 5 cm of rainfall in a half- hour period over the same area would also be categorized as a cloudburst. During a cloudburst event, a place receives about 10% of this annual rainfall within an hour.

What is Cloud Burst in Hindi

Here you will understand why cloudburst happens?

Most of cloudbursts in India happen in the Himalayan states where the local topology, wind systems, and temperature gradients between the lower and upper atmosphere facilitate the occurrence of such events.
Cloudbursts happen when saturated clouds are unable to produce rain because of the upward
movement of very warm current of air. Instead of dropping down, raindrops get bigger in size and get pushed up due to the air current. Eventually they become too heavy to hold and drop down, leading to more rain than usual. This can be observed in the given picture below:

In the Indian subcontinent, a cloudburst usually occurs when a monsoon cloud drifts northwards, from the Bay of Bengal or Arabian Sea across the plains, then onto the Himalayas and bursts, bringing rainfall as high as 75 millimeters per hour.

5 Recent Incidents of Cloudburst in India

Can Cloudburst be Forecasted?

The India Meteorological Department forecasts rainfall events well in advance, but it does not predict the quantum of rainfall. The forecasts can be about light, heavy, or very heavy rainfall, but weather scientists do not have the capability to predict exactly how much rain is likely to fall at any given place.

Additionally, the forecasts are for a relatively large geographical area, usually a region, a state, a
meteorological sub-division, or at best a district. Theoretically, it is not impossible to forecast rainfall over a very small area as well, but it requires a very dense network of weather instruments, and computing capabilities.