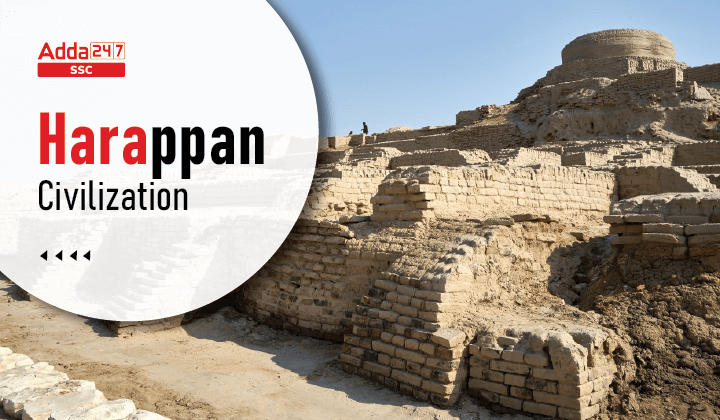 The civilization was first identified in 1921 at Harappa in the Punjab region(therefore initially called as Harappan civilization) and then in 1922 at Mohenjo-daro (Mohenjodaro), near the Indus River in the Sindh (Sind) region. Both sites are in present-day Pakistan. It was Daya Ram Sahni, who first discovered the sites of Harappan in 1921.

The cities of the Harappan civilization were noted for their urban planning, baked brick houses, elaborate drainage systems, water supply systems, clusters of large non-residential buildings, and techniques of handicraft and metallurgy.

There are disagreements over the exact time period of Harappan civilization, but largely it can be concluded that it began flourishing during 2500 bce and began disappearing during 1900 bce.

The Indus Valley Civilisation was roughly contemporary with the other riverine civilisations of the ancient world: Ancient Egypt along the Nile, Mesopotamia along the Euphrates and the Tigris, and China in the drainage basin of the Yellow River and the Yangtze.

It extended from Balochistan in the west to India’s western Uttar Pradesh in the east, from northeastern Afghanistan in the north to India’s Gujarat state in the south. This can be seen in the given map below:

Archaeological Survey Of India (ASI) have conducted new excavations in and around the old planned Harappan city in Rakhigarhi. 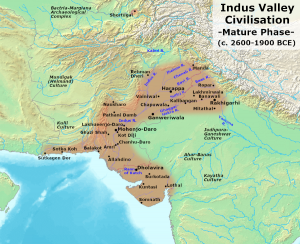 The oldest site of Indus Valley Civilization, Bhirrana and the largest site, Rakhigarhi are located in Indian state of Haryana. Bhirrana or Birhana, a small village in Fatehabad District, Haryana, is situated along the channels of the seasonal Ghaggar (Saraswati) river. The Bhirrana site is stated to be the oldest Saraswati-Indus Valley Civilization site, dating back to 7570-6200 BCE. The antiquities found from this site include pottery, fabrics, copper chisels, arrow heads, spear heads; beads of steatite, faience, terracotta and shell, bangles of copper and terracotta; semi-precious stones and beads etc.

The archaeological excavations revealed mature Harappan phase at this site represented by planned township having mud-brick as well as burnt-brick houses with proper drainage system. The ceramic industry represented by red ware, which included dish-on-stand, vase, jar, bowl, beaker, perforated jar, goblet and handis. Animal sacrificial pit lined with mud brick and
triangular and circular fire alters on the mud floor have also been excavated that signifiest the ritual system of Harappans. A cylindrical seal with five Harappan characters on one side and a symbol of an alligator on the other is an important find from this site.

Thousands of seals have been discovered by archaeologists from the Harappan sites. Most of the seals were made of steatite, which is a kind of soft stone. A few of them were also made of terracotta, gold, agate, chert, ivory and faience. The standard Harappan seal was square in shape with a 2X2 dimension.

It is believed that the seals were used for commercial purposes. A few seals were also carried as amulets, perhaps as a kind of identity card. All the seals have pictures of animals with
something written in a pictographic script (which is yet to be deciphered). Chiefly, the animals
represented are tigers, elephants, bulls, bison, goats and so on. Most of the seals have been written on both sides. The writings are in the Kharosthi style (right to left). Some seals have mathematical imagesand must have been used for educational purposes. The most famous seal is the Pashupati Seal of Harappan civilization from Mohenjo Daro.

Town-planning was the prime specialty of the Harappan culture. Each town was divided into two main parts. On higher ground was built the fort that housed the ruling class and the priestly class. From the foot of the fort area was spread the human settlements of other classes.

This can be seen in the given pictures: 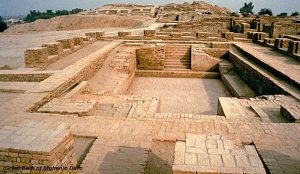 It’s cities had fine drainage system, Well-arranged water supply system, the street lights system, Watch and ward arrangement during the night to oust the lawbreakers, particular places to dump waste material, public wells in every street, Well in every house, Main streets varying for 9 feet to as wide as 30-34 feet and were divided into networks of narrow lanes with great skills of dividing the cities. The building materials used were Burnt bricks and sun-dried bricks. 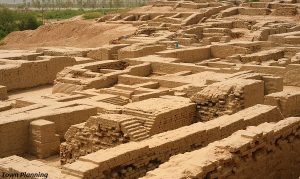 With time, there was shrinkage in the Harappan Civilization. For instance, Mohenjo-Daro, one of the major cities of this civilization, earlier flourished on about eighty five hectares of land but later on got confined to just three hectares. Due to some reason, population from the Harappa started moving to the nearby and outer cities and places like Punjab, Upper Doab, Haryana, etc. But what exactly caused the decline of the Harappan Civilization is still a mystery.

Some possible factors which might have led to the decline pf the civilization are as follows.

It is commonly believed that the Aryans were the next settlers. They were skilled fighters, so their attack might have led to the destruction of the Harappan Civilization. Even the epics of the Aryans mentioned about their victory over the great cities. The human remains found during excavation of Indus valley point towards some violent cause of their death.

The theory of a huge climatic change or natural disaster seems credible. It has been found out that around 2000 BC some major climatic changes started occurring in the Indus Valley. These changes had led to floods in the plains and cities. Historians have found evidence to prove this theory as well.

There was a fall in the average rainfall in the cities leading to the formation of desert-like condition. This led to the decline in agriculture on which most of the trade was dependent. Owing to this, people of the Harappan civilization started shifting to some other location leading to the decline in the entire civilization. As per some scholars, the reason of the decline is the change in the course of River Ghaggar- Harka that had led to an increase in aridity of the place.

Q. The Harappan seals were commonly found in which shape?
Ans: The standard Harappan seal was square in shape with a 2X2 dimension.

Q. Which is the largest site of Indus Valley Civilization in India?

Ans: Rakhigarhi is the largest site of Indus Valley Civilization in India. It is located in Indian state of Haryana.

Q. The Harappan seals were commonly found in which shape?

Ans: The standard Harappan seal was square in shape with a 2X2 dimension.