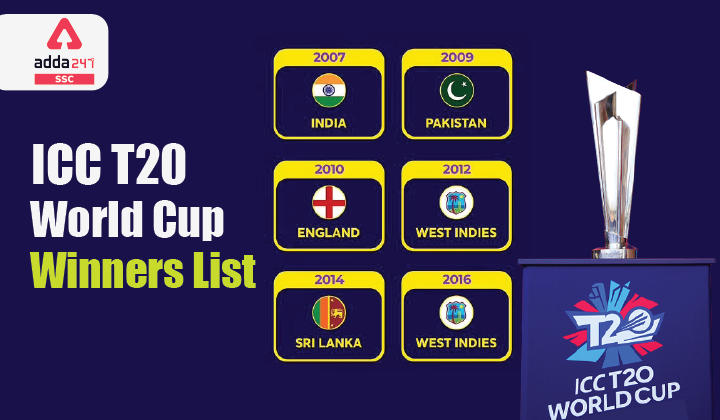 If we go through the past records West Indies is the best T20 team so far. West Indies is the only country that won the ICC T20 World Cup twice (2012 & 2016) and India, Pakistan, England, & Sri Lanka won it once. The detailed list of the winners from 2007 to till now with the Player of Series has been tabulated below.

In T20 World Cup 2014, Sri Lanka defeated India to become the new T20 World Cup Winner. Sri Lanka won the final match by 6 wickets. In this World Cup, Virat Kohli from India became both the top run-scorer and player of the series.

England was the winner of the T20 World Cup 2010. With this, England became the first non-Asian team to win the T20 World Cup in 2010. England beat Ashes rivals Australia in the final by 7 wickets. The English team had lost to the West Indies in their first game, but they won all the following games and captured the trophy.

After finishing as runners-up in the first T20 World Cup, Pakistan won their first 120 World Cup two years later in 2009. England hosted this tournament, and Pakistan defeated Sri Lanka by 8 wickets in the final to become champions. Pakistan lost their first match against England and a Super 8 match against Sri Lanka. Still, they managed to win the trophy. Team India’s only victory came against Ireland in the tournament.

The Indian cricket team was the first to win the T20 World Cup playing under the captaincy of MS Dhoni. India defeated Pakistan in the final to win the first T20 World Cup in 2007. This was the historic match as it was between India and Pakistan. India only lost one game in the tournament – against New Zealand in Super 8s. In this tournament, Shahid Afridi from Pakistan was the player of the series.

Q. Who was the captain of the Indian Cricket Team during the T20 Cricket World Cup 2007?

Ans: MS Dhoni was the captain of the Indian Cricket team.

Ans: The next host will be Australia for the 2022 World Cup.

Q. Who was the first winner of the T20 Cricket World Cup?

Ans: India was the first country to win the ICC T20 Cricket World Cup title against their arch-rivals Pakistan.

Q.Where was the first edition of the T20 World Cup was held?

Ans: The first edition was held in South Africa where Indian marked their first win.

Q. How many times has India won T20 World Cup?