SSC MTS Recruitment 2021: Due to the pandemic, SSC MTS has delayed the schedule of examination and finally released the notification for the SSC MTS 2020-21 examination. This is good news for all the aspirants waiting for an opportunity to grab a job through SSC. SSC MTS is a great opportunity for the 10th pass candidates to get a government job in India. As per the SSC Calendar, Staff Selection Commission has finally released the dates for the post of MTS (Multi Tasking Staff) in various departments of the Central Government. SSC MTS is organized under Staff Selection Commission to recruit candidates for various posts like peon,daftary,jamadar,Junior Gestetner Operator, Chowkidar, Safaiwala, Mali, etc. SSC MTS 2020 registration was supposed to release from June 2 to July 15, 2020. In this article, we are going to discuss all the details regarding the SSC MTS Notification 2021.

Click here to visit the Official Notification of SSC MTS 2020 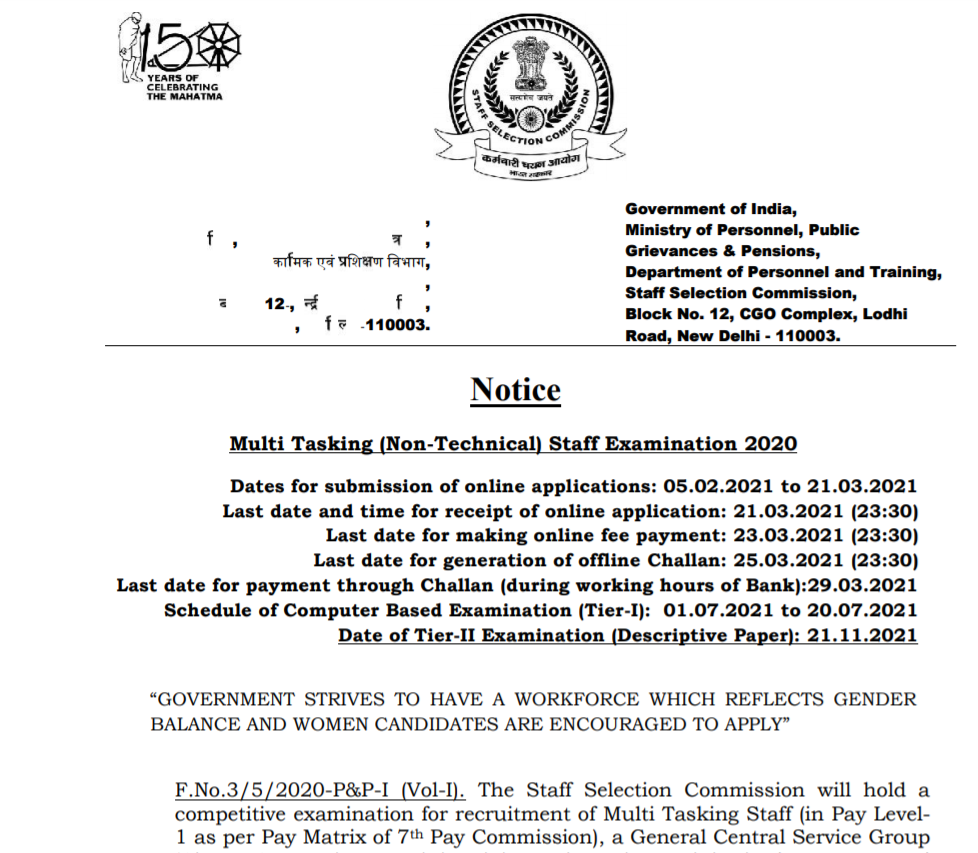 SSC MTS 2021 Exam is conducted to recruit candidates in the General Central Service Group ‘C’ Non-Gazetted, Non-Ministerial post in various Ministries/Departments/ Offices of the Government of India, in different States/Union Territories. Every year lakhs of candidates appear for the SSC MTS Exam. In 2019, approximately 38 lakh candidates had appeared for the Exam. Tentative vacancies for MTS Exam 2020 are 7000.

The commission has released the SSC MTS notification 2021 on February 05, 2021. Check complete details about exam dates, syllabus, eligibility criteria, etc below in this article.

There are around 8300 MTS posts in the non-technical section announced for SSC MTS 2017. But Good news for SSC Aspirants here is the bumper increase in SSC MTS 2019-20 vacancies, vacancies now increased to 9,069. The vacancy is expected to be the same as that of last year. SSC MTS Vacancies will be announced with the release of Official Notification. Let’s have a look at previous years’ SSC MTS Vacancy to have a clue about the SSC MTS Vacancy 2021.

The SSC MTS exam pattern will consist of two papers followed by document verification.  As per the latest notification, there shall be two papers viz. Paper – I and Paper-II.

Below are the details about SSC MTS 2021 Eligibility Criteria:
NATIONALITY / CITIZENSHIP:
A candidate must be either:
(a) a citizen of India, or
(b) a subject of Nepal, or
(c) a subject of Bhutan, or
(d) a Tibetan refugee who came over to India, before the 1st January 1962, to permanently settle in India, or
(e) a person of Indian origin who has migrated from Pakistan, Burma, Sri Lanka, East African countries of Kenya, Uganda, the United Republic of Tanzania(Formerly Tanganyika and Zanzibar), Zambia, Malawi, Zaire, Ethiopia, and Vietnam to permanently settle in India.
Provided that a candidate belonging to categories (b), (c), (d), and (e) above shall be a person in whose favor a certificate of eligibility has been issued by the Government of India.
A candidate in whose case a certificate of eligibility is necessary may be admitted to the Examination but the offer of appointment will be given only after the necessary eligibility certificate has been issued to him by the Government of India.
Note I: Candidate should note that Date of Birth as recorded in the Matriculation / Secondary Examination Certificate or an equivalent certificate available on the date of submission of application will only be accepted by the Commission for determining the Age- eligibility and no subsequent request for its change will be considered or granted.

The candidates must have passed the Matriculation Examination or equivalent from a recognized Board.

SSC MTS Exam needs to be prepared thoroughly and Adda247 is there to help you in the preparation of the same. We will provide you a mock test to practice for the SSC MTS 2020-21 exam. Visit www.adda247.com to check the SSC MTS books and test series.
Target SSC MTS Exam: Buy Video Course Now

Every candidate who registers for SSC MTS Exam 2020 within the stipulated time will be assigned an e-admit card/hall ticket/call letter that can be downloaded from the official website of SSC. The admit card for the MTS Tier-1 exam will be issued first followed by admit card for Paper-II. Candidates are advised to keep checking this page for updates. As the exam is scheduled in October we can expect the SSC MTS admit card by the first week of October 2020.

Staff Selection Commission (SSC) will release the SSC MTS results after completion of each Tier Exam. The candidates selected in the rounds progress to the next one. Candidates can check the result from the direct link to the official SSC CGL website as and when the results are announced. Keep following this page for all details regarding the SSC MTS Results.

Q. When can I apply for SSC MTS Exam?

Q. When will SSC MTS Exam be conducted?

Q. Is there any age relaxation in SSC MTS for OBC Category?

Yes, the Age-relaxation permissible beyond the upper age limit for OBC is 3 years.

Q. What are the SSC MTS Age criteria for various posts?

The age limits for the posts as per the Recruitment Rules of various User Departments are:
(i) 18-25 years
(ii) 18-27 years

Q. What is the minimum educational qualification for SSC MTS Recruitment 2020-21?

The minimum educational qualification for SSC MTS is passed in Matriculation Examination or equivalent from a recognized Board.

Q. What is the date to acquire the minimum educational qualification in the SSC MTS?

Candidates should have acquired the minimum educational qualification on or before the crucial date (1st January 2021) that was declared with the official notification of SSC MTS 2020-21.

Q. What is the scheme of the SSC MTS examination?

Q. Is there any change in the SSC MTS exam pattern?

Q. Is there normalization of marks in the SSC MTS 2020 examination?

Marks scored by candidates in Paper-I will be normalized in SSC MTS 2020 by using the formula published by the Commission.

Q. Can I give preference of states in the SSC MTS application form?

Yes, the candidates are required to give preferences of States/ UTs, in the order of priority, in the online application form.

Q. Can I choose only 3 states as my preference for SSC MTS posts?

Q. Can I change my preference of states later after the final submission of the SSC MTS application?

Q. Is paper-II qualifying in nature?

Paper-II will only be of qualifying nature and is intended to test elementary language skills. However, marks scored by the candidates in Paper-II will be used to decide merit in case more than one candidate score equal normalized marks in Paper-I.

Q. What is the application fee?

Q. Who is exempted from paying the application fee?

Women candidates and candidates belonging to Scheduled Castes(SC), Scheduled Tribes (ST), Persons with Disabilities (PwD), and Ex-servicemen (ESM) eligible for reservation are exempted from payment of the fee. 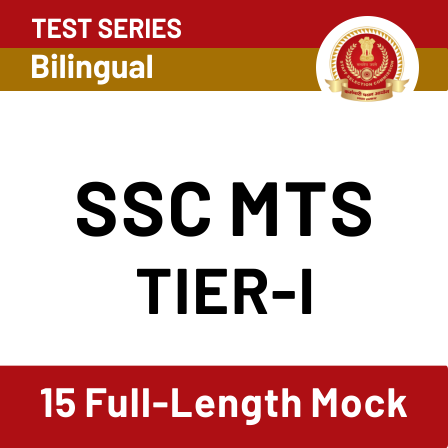 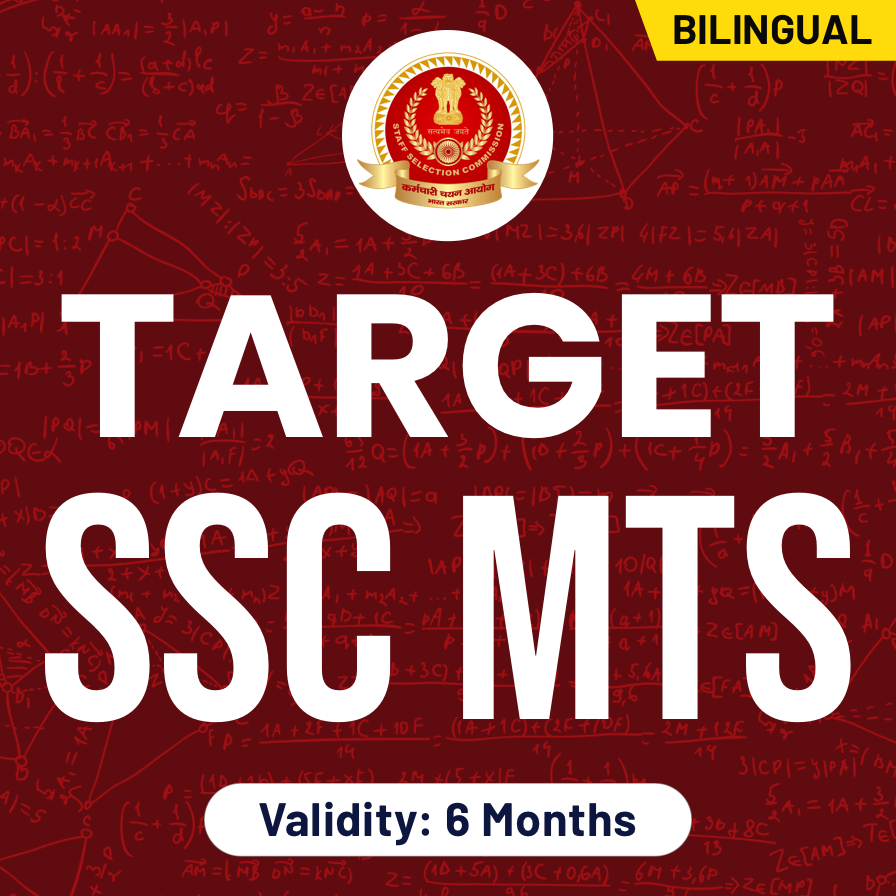