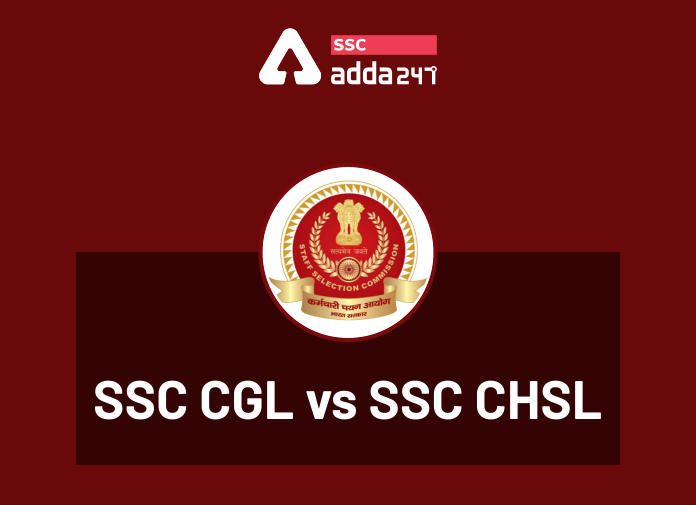 SSC CGL vs SSC CHSL: The Staff Selection Commission (SSC) conducts recruitment drives every year to fill in numerous vacancies across the country for different departments. SSC CGL and SSC CHSL are the two highly competitive exams conducted by SSC every year. Lots of aspirants get confused between which exam to prepare for. Today in the post below we will be looking at difference between ssc cgl and ssc chsl exams in detail and aspirants can decide which exam they want to prepare for.

What is SSC CGL?

The SSC CGL Exam is the Combined Graduate Level Exam. This exam is conducted to recruit candidates in different Group B and Group C posts in various Government Departments and Ministries.

What is SSC CHSL?

SSC CHSL job is for all the 12th pass students. The post varies from Level 2 to Level 4. This exam is conducted for the lower division clerks in various Government offices.

Given below are the posts for which Staff Selection Commission recruitment is conducted under CGL and CHSL.

SSC offers the highest pay level post via SSC CGL exam. The pay level varies from level 4 to level 8 in SSC CGL. Candidates will be asked for the posts while filling up the preference form. Qualified candidates will be allotted the post according to the marks scored by them in the overall merit.

SSC CHSL job is for all the 12th pass students. The post varies from Level 2 to Level 4. You will be recruited as Lower Division Clerk, Junior Secretariat Assistant, Postal Assistant, DEO etc.

Q. Can an aspirant apply for both SSC CGL and SSC CHSL Exams?

Ans. Both SSC CGL and SSC CHSL exams are conducted separately by SSC o  yes candidates can apply for both the exams.

Q. How many times I can apply for SSC CGL or SSC CHSL?

Ans. As long as a candidate is satisfying the eligibility criteria one can apply for the SSC CGL and CHSL exams. There is no such limitations.

Q. How many tiers are there in the SSC CGL & CHSL exams?