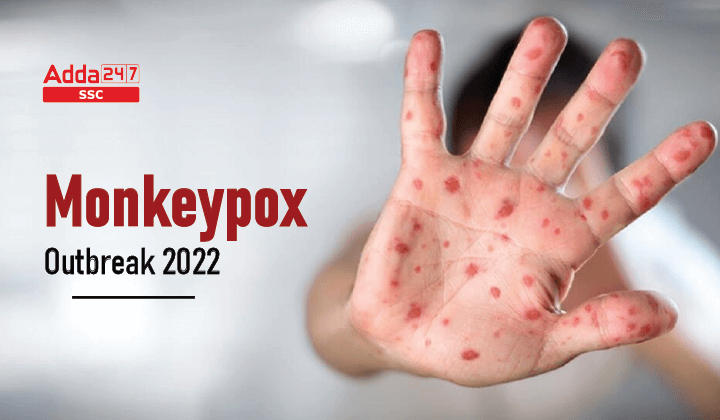 Monkeypox Outbreak 2022: Since early May 2022, cases of monkeypox have been reported from countries where the disease is not endemic, and continue to be reported in several endemic countries. Most confirmed cases were among those having travel history to countries in Europe and North America, rather than West or Central Africa where the monkeypox virus is endemic.

Most reported cases so far have been identified through sexual health or other health services in primary or secondary health-care facilities and have involved mainly, but not exclusively, men who have sex with men.
Considering such spread World Health Organization has declared the monkeypox outbreak a Public Health Emergency of International Concern.

What is Monkey Pox?

Monkeypox is a viral zoonosis (a virus transmitted to humans from animals). With the eradication of smallpox in 1980 and subsequent cessation of smallpox vaccination, monkeypox has emerged as the most important orthopoxvirus for public health. Monkeypox primarily occurs in central and west Africa, often in proximity to tropical rainforests, and has been increasingly appearing in urban areas. Animal hosts include a range of rodents and non-human primates.

Monkeypox virus is an enveloped double-stranded DNA virus that belongs to the Orthopoxvirus genus of the Poxviridae family. There are two distinct genetic clades of the monkeypox virus: the central African (Congo Basin) clade and the west African clade. The Congo Basin clade has historically caused more severe disease and was thought to be more transmissible.

Human monkeypox was first identified in humans in 1970 in the Democratic Republic of the Congo in a 9-month-old boy.

Animal-to-human (zoonotic) transmission can occur from direct contact with the blood, bodily fluids, or cutaneous or mucosal lesions of infected animals. In Africa, evidence of monkeypox virus infection has been found in many animals including rope squirrels, tree squirrels, Gambian pouched rats, dormice, different species of monkeys and others. The natural reservoir of monkeypox has not yet been identified, though rodents are the most likely. Eating inadequately cooked meat and other animal products of infected animals is a possible risk factor. People living in or near forested areas may have indirect or low-level exposure to infected animals.

Human-to-human transmission can result from close contact with respiratory secretions, skin lesions of an infected person or recently contaminated objects.
Recent studies suggest that sexual contact of an infected Man with a Man(MSM) are responsible for majority of transmissions of the virus.

A separate vaccine for Monkeypox is yet to develop but vaccination against smallpox was demonstrated to be about 85% effective in preventing monkeypox.
At present, the general practice worldwide is to focus on treatment of symptoms of Monkeypox.
Raising awareness of risk factors and educating people about the measures they can take to reduce exposure to the virus is the main prevention strategy for monkeypox. Scientific studies are now underway to assess the feasibility and appropriateness of vaccination for the prevention and control of monkeypox.

The outbreak was first reported in India on 14 July 2022 when Kerala’s State Health Minister Veena George announced a suspected imported case which was confirmed hours later by the NIV. India was the tenth country to report a monkeypox case in Asia and the first in South Asia. Few other cases have been reported from Delhi, UP, Bihar and Telangana.