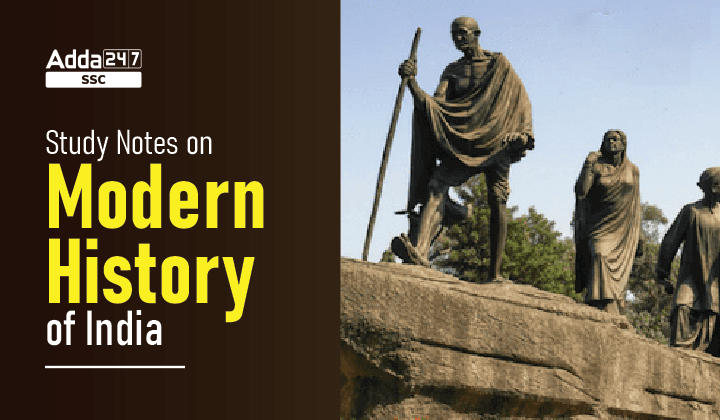 Modern History of India: The British’s early 1600s arrival as traders, marked the peak of colonization. Capitalizing on the disintegration that existed in India after Mughal control, the British actively exploited the & ‘divide-and-rule’ tactic to dominate over India for nearly two centuries. Although the British had arrived earlier, it wasn’t until the Battle of Plassey in 1757 AD that they began to hold political control. For about two centuries, the British ruled over India, bringing about revolutionary changes in the social, political, and economic landscape of the nation.

The exploitative policies of the British in India saw the birth of nationalist agitation against it and the formation of Indian National Congress (1885). The anti British struggle became truly a mass movement with the arrival of Mahatma Gandhi (1869 – 1948). With the passage of time and stubbornness of the Indians, we got Independence in 1947.

Modern History of India in Hindi

Modern history of India Bipin Chandra book covers Indian history from the 18th to the 20th century, although it is not specifically a history of the liberation movement. It describes the socioeconomic aspects and circumstances present in India at the time, which aided the British in firmly establishing their dominance over the continent. The book depicts an intriguing version of daily life at that time for its audience. It discusses the perceptions and responses of the average person to British rule. In essence, it addresses the reasons behind and consequences of British dominance in India. If you want to provide creative and analytical responses, where you don’t only list facts and happenings but also analyze them, this is an excellent book to read.

History is an important subject in competitive exams. It is essential for candidates to have a list of modern history of India books for Exam preparation.

List for Modern history of India books for mains and prelims syllabus is given below:

Q1. How many chapters are there in History of Modern India by Bipin Chandra?

Ans. Bipin Chandra and NCERTs with multiple revisions are sufficient for modern history.

Q3. Which books to cover for modern history of India?

Ans. List for Modern history of India books for mains and prelims syllabus is given above in the article for all types of exams.

Q4. Which book is best for the post-independence history of India?

Ans. Bipin Chandra's India Since Independence is one of the best books to study India's post-independence history.