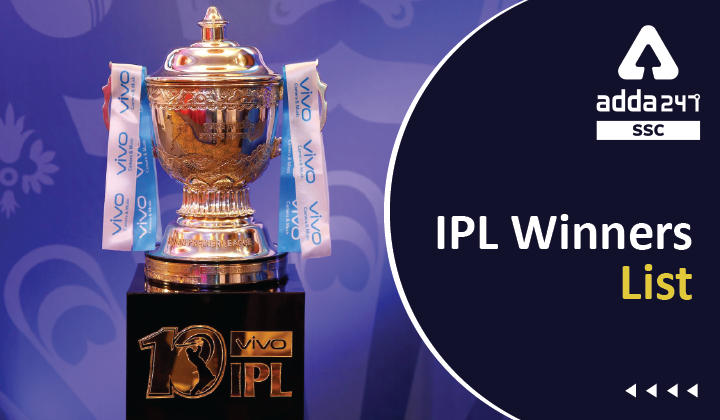 Indian Premiere League is a 2 monthly long cricket carnival that involves 8 teams. IPL is the most-watched cricket league in the world. IPL is governed by the Board of Control for Cricket in India (BCCI). Mumbai Indians are the most successful IPL team, having won the tournament four times and having finished runners-up on one occasion. Chennai Super Kings hold the record of featuring in most no. of finals. Chennai Super Kings holds the record of losing most no. finals (5). Cricket is more than just a game in India, it is more of a religion in India. With the game of Cricket getting shorter & shorter over the years, the inaugural edition of IPL was played in the year 2008.

Here we present the list of winners in IPL in from of the table which includes winner, runner-up, venue, number of teams participated, player of the match, and player of the series. Let’s have look at the table of the list of IPL   Winners from 2008 till now.

Here we are providing you with the details for the IPL Winners List from 2008 to 2021. The details include the information of the winning team and runner-up team with the runs and wickets.

The inaugural season of IPL was won by the Rajasthan Royals. The team was led by legendary bowler Shane Warne. The team was a thoroughly well-balanced team with experienced batsmen like Shane Watson and Graeme Smith, an explosive batsman like Yusuf Pathan in the middle order, and deceptive bowlers like Sohail Tanvir were the backbone of the tea’s journey in the first edition. In the final against the Chennai Super Kings, Yusuf Pathan played a tremendous match and contributed with both bowl and bat. Yusuf took 3 crucial wickets and also scored a quickfire 56 from 39.

Deccan Chargers was the Hyderabad-based team that was led by Adam Gilchrist. The team had some incredible hitters in them with Herschelle Gibbs, Andrew Symonds, young Rohit Sharma in the dugout. That season Pragyan Ojha played a very crucial role with his left-arm spin bowling and scalped 18 wickets in the tournament. Adam Gilchrist notched up a total of 495 runs in 16 matches and was the second-highest run-scorers in the season behind compatriot Mathew Hayden.

Mahendra Singh Dhoni lifted the trophy in the 3rd edition of IPL after missing it in the 1st edition. The team was very balanced and included the likes of Suresh Raina, Mathew Hayden, Albie Morkel, Muralitharan. The team was one of the favorites to lift the title right from the start of the tournament. Suresh Raina was at his absolute best with the bat throughout the tournament. His knock of 57 runs from 35 lit up CSK’s road to glory in its final against Mumbai Indians.

CSK became the first and to date only team to defend the championship successfully after beating RCB in the final. CSK’s batting unit was lit up by the presence of Michael Hussey, who played some important innings throughout the tournament. Hussey and Murali Vijay’s 159 run opening partnership against the Royal Challengers Bangalore was the main reason for CSK defending the title.

Kolkata Knight Riders led by Gautam Gambhir defeated the defending champions Chennai Super Kings. CSK set a huge target for KKR batsmen of chasing 190 in the final, Manvinder Bisla took the responsibility of chasing the target on himself and replied with a swashbuckling inning of 89 from 48 balls. CSK’s innings was led by Suresh Raina’s 73 runs of 38 balls wasn’t enough to stop the Kolkata Knight Riders from lifting the title.

Rohit Sharma’s Mumbai Indians lifted their 1st title by beating Chennai Super Kings in the final of the IPL 2013 edition. The side was nicely well balanced throughout the tournament. The likes of Kieron Pollard, Lasith Malinga, and Mitchell Johnson were consistent performers for the team and helped the team in lifting the title.

Gautam Gambhir led Kolkata Knight Riders in their 2nd title by beating Kings XI Punjab. Manish Pandey’s heroics led KKR to chase a huge total of 199 successfully. Manish Pandey scored a terrific 94 from 50 and overshadowed Wriddhiman Saha’s tremendous inning of 115 * from 55 which helped Kings XI Punjab to the score of 199.

Mumbai Indians became the third team after CSK and KKR to win the title multiple times. Lendl Simmons, Rohit Sharma, Ambati Rayadu, and Kieron Pollard carried the balanced batting unit. The bowling department was led by Lasith Malinga took 24 wickets in the tournament and helped Mumbai beat Chennai once again in the final.

The Sunrisers Hyderabad team won the final against Royal Challengers Bangalore by the margin of just 8 runs. David Warner crafted the team’s journey through the season as a captain. The team was very balanced and included the likes of Kane Williamson, Shikar Dhawan, and Bhuvaneshwar Kumar who helped them clinch the title.

Mumbai Indians became the 1st team in IPL history to win the title thrice. Mumbai had previously won the title in 2013 & 2015. The Mumbai Indians defeated the Rising Pune Supergiants in the final by just one run. Rohit Sharma, as the captain of Mumbai Indians, was fantastic.

Chennai Super Kings won the IPL for the first time since 2011. The team had numerous experienced players like Ambati Rayadu and Shane Watson who were the backbones of the batting unit. CSK’s bowling unit was spearheaded by Dwanye Bravo and provided breakthroughs at crucial times.

The final of the IPL 2019 yet again saw Mumbai Indians and Chennai Super Kings face off for the 4th time in the final. The final went down to the last bowl. Mumbai Indians beat CSK in the super over after traditional 20 overs were unable to yield a winner. Mumbai Indians became the champions for a record 4th time.

Q. Who is the leading run-scorer in IPL?
Virat Kohli holds the record of scoring most runs in IPL history. He has scored 5412 runs