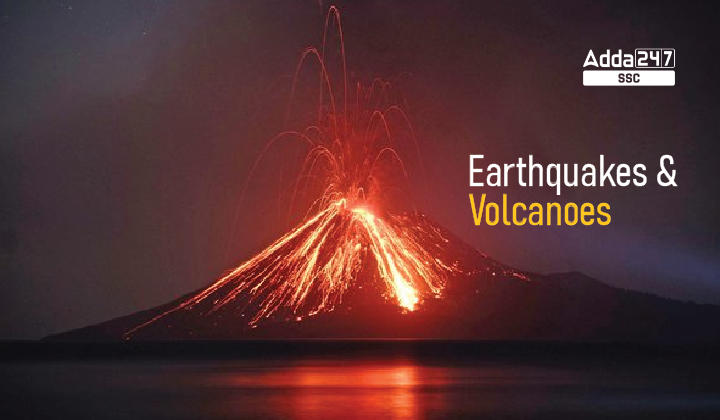 Earthquakes and Volcanoes results in significant deformation in very short interval. Earthquake is defined as any sudden shaking of the ground due to seismic waves passing through Earth’s crust while Volcano is a crack in the earth’s crust that allows eruption of lava, volcanic ash, and gases. The majority of Earthquakes and Volcanoes occur in the Ring of Fire. The Ring of Fire, also referred to as the Circum-Pacific Belt, is a path along the Pacific Ocean characterized by active volcanoes and frequent earthquakes.

Majority of earthquakes are usually caused by sudden movements of plates along faults. These plates are constantly moving due to thermal convective currents. Stress stored due to bending, faulting, or other physical processes is released as kinetic energy through weak zones on the surface.

The sub-surface area along a fault plane, where the seismic waves are originated, is called the focus or hypocenter of an earthquake. And the area at the surface directly above the focus is the epicenter.

Sudden and quick release of energy causes vibrations in the earth crust, thus resulting in Earthquake. Earthquake waves propagate outwards from the epicenter. The most damage occurs closest to the epicenter, and the severity of the earthquake weakens as it moves away from it. 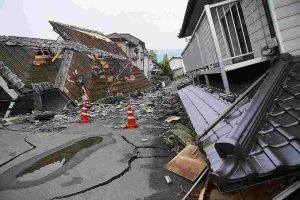 A volcano occurs when molten magma from the earth’s interior erupts through vents and cracks in the crust, accompanied by steam, gases such as hydrogen sulphide, sulphur dioxide, hydrogen chloride, carbon dioxide, etc. and pyroclastic material (cloud of ash, lava fragments carried through the air, and vapour).
Chemical composition and viscosity of the lava determines the shape and size of Volcano.

You can see pictures of Earthquake and Volcanoes given below: 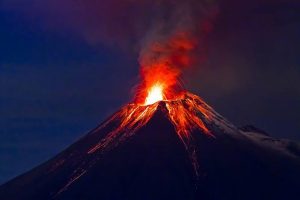 Earthquakes and volcanoes are disastrous events which create widespread devastation on the earth’s surface. They occur due to movement of plates and Earth’s internal stored energy.

Q. Earthquakes and Volcanoes are caused by?

Ans. They occur due to movement of plates and Earth’s internal stored energy.

Q. Where most events of Earthquakes and Volcanoes are observed?

Ans. The majority of Earthquakes and Volcanoes are observed in the Ring of Fire.