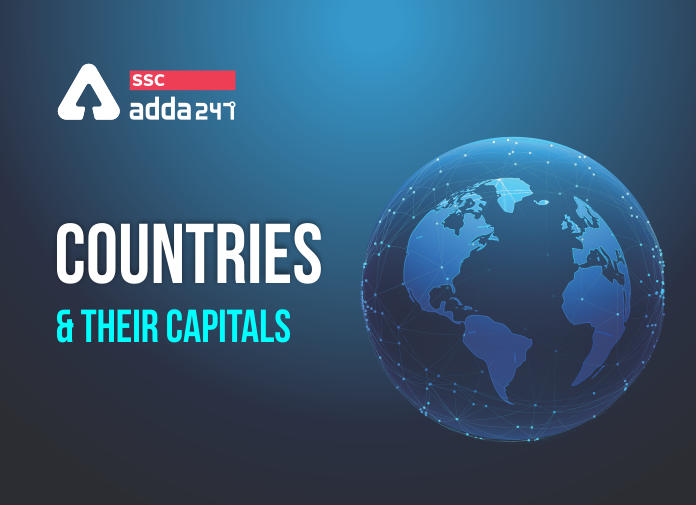 Countries and Capitals: There are a total number of 195 countries in this world which are divided into 7 continents. Out Of these 195 Countries, 193 countries are member states of the United Nations. Holy See and the State of Palestine are the non-member observer states. The seven continents which comprise of 195 countries are Asia, Australia, Europe, Africa, North America, South America, and Antarctica.

Countries and their Capitals

List of Country, Capital and Currency is the most important topic for the General Awareness section of every competitive exam. This topic comes under the Static GK which can be asked in the government competitive exams for 3 to marks at least. In SSC CGL, SSC CHSL, UPSC, RRB, etc. the questions can be asked from this section. Candidates must keep themselves prepared for the important and scoring topic of Capital and Currencies. The competition is very tough in competitive exams so one single correct answer can help you to score more and make a huge difference in your overall score. Try to cover the information about the countries in the news recently. We are providing you with the complete list of all the countries in the world along with their capitals and currencies.

What is a Continent?

A continent is any of several large areas or regions or land also referred to as landmasses. There are seven continents in the world. We have listed below the seven continents situated on the earth. Asia has the highest population with approx 4.4 billion people living on the continent alone. Africa contains 54 countries containing about 27% of the world’s total countries.

Check out the complete list of Indian states and capitals

Why do all Countries have Capital?

You may wonder why do countries need capital in the first place. What is the importance of having a capital city? The word ‘capital’ is derived from the Latin caput, meaning ‘head’. The capital of a country acts as the head of the state. It is the prime center for all government-related services or offices. The administration of the country is generally controlled by the people sitting in the capital which symbolizes power.

Nauru is the only country in the world without an official capital. It was once known as Pleasant Island. It is the third smallest country by area and the second smallest by population. But Yaren is considered to be the capital city of Nauru. Yaren is a district where most of the important buildings are located.

Let’s take a look at the continent-wise list of countries and their capitals in alphabetical order. Countries vary largely based on demographics and other factors.

What Are The Largest States In India? Check Complete List

Countries with more than one Capital

Some countries consist of more than one capital. The below table contains the details of those countries.

Countries, Capitals and Currency of Africa

Africa is the world’s second-largest continent by area and population. It contains approx 54 countries in total. The continent is among the least wealthy due to the legacies of European colonization. The largest country in Africa by area is Algeria and Nigeria is its largest by population. Check out the list of African countries and their capitals:

Countries and Capitals of Asia

Asia is the largest and the most populous continent in the world. It constitutes roughly 60% of the world’s population. Asia has been the site for many first civilizations of humans. It is subdivided into 49 countries with its distinctive features. India and China are the major economies of Asia contributing to the world GDP. Take a look at all Asian countries along with their capitals:

Countries and Capitals of Australia

Australia also known as the Commonwealth of Australia consists of mainland Australia, Tasmania, and various other smaller islands. Mainland Australia is the 6th largest country in the world with Sydney being its largest city. It is a highly developed country with a high-income economy. Check out the list of countries with capitals under the Australian continent.

Countries and Capitals of Europe

Europe is bordered by the Arctic Ocean to the north, the Mediterranean Sea to the south, the Atlantic Ocean to the west, and Asia to the east. Check out the list of all European countries along with their capitals given below:

23 countries come under the North American continent. It contains the United States of America, the largest economy in the world. Check out the list of countries situated in North America along with their capitals.

Countries and Capitals of South America

South America lies below North America and is relatively smaller in size. It is the fourth largest continent in the world. There are 12 countries in South America. Check out the list of countries with their capitals.

Q. Which is the least populated country in the world?
Ans: Vatican city

Q. How many countries are there in the world?

Ans: There are 195 countries in the world.

Q. Which country has three capital?

Q. Do continents have capitals?

Ans: Continents don’t have capitals. But Australia is a country and also a continent. So, it had a capital.

What is a Thunderstorm? Causes, Types, And Safety Precautions