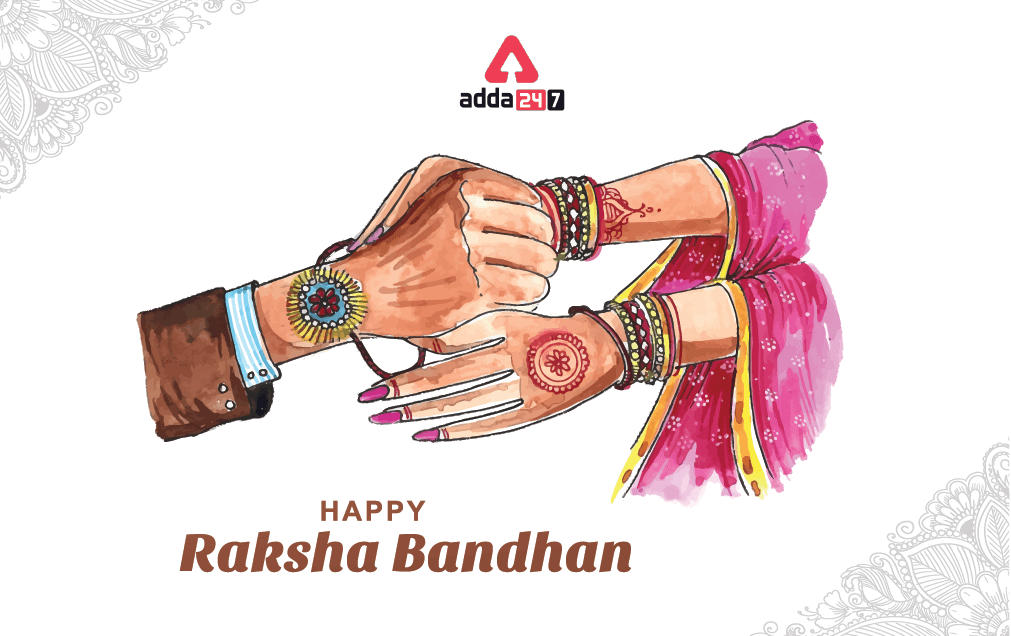 We wish all our readers and aspirants, a very happy Raksha Bandhan. Raksha Bandhan in Sanskrit means “the tie or knot of protection”. The word Raksha signifies protection while Bandhan intends to tie. The festival of Raksha Bandhan is observed in the month of Shravana according to the Hindu calendar and typically falls in August every year. The popular festival of Raksha Bandhan is also known as Rakhi and this year occurs on 11th August 2022. This is an occasion that signifies admiration, responsibility, love, and the sacred feeling of fraternity. It is a classical Hindu festival that denotes the love and trust between brothers and their sisters. Popularly this festival is denoted by the tying of a Rakhi or a holy thread by the sister on the wrist of her brother.
The ritual of Raksha Bandhan begins with a prayer in front of God. On this day, sisters tie Rakhi on the wrist of their brothers, put roli and rice on his forehead, and pray for his well-being. In return, the brother also wishes her a good life ahead and accepts the love with a commitment to stand by his sister through all the good and bad times. The brother vows to look after his sister throughout life. Exchange of gifts takes place that signifies the physical acceptance of the love, the bond, remembrance of their togetherness, and his promise.
Originally, this festival is mainly celebrated in the north and western region of India but now the world has also started celebrating this festival with the same feelings of love and brotherhood. People prepare delicious meals, eat amazing sweets and exchange presents. And those who cannot manage to meet each other in today’s times, send rakhi cards and e-rakhis through the internet, and even perform the rituals on video calls.
All thanks to advanced technology!! Sisters tend to prepare handmade rakhis for their brothers as a symbol of personal feelings and affection for their brothers. The joyful gathering, the rare family get-together, and the feeling of brotherhood and sisterhood call for a huge celebration.
Rakshabandhan has many historic stories linked to it. The multicultural aspects of this festival can be learned from history dating back thousands of years. Mughal King, Humayun, showed his deference toward the significance of Rakhi. He didn’t take action against the attack of Shershah Suri and went away to save and help the widow Rajput queen of Chittaur, Karnavati, who had sent a rakhi to Humayun.

The story of Lord Krishna and Draupadi is quite popular in the holy book of Mahabharata.  Lord Krishna saved the respect of Draupadi by divinely elongating her sari when Pandavas lost the game of dice and Kauravas were removing her sari. This happened as Lord Krishna had bounded himself by Draupadi’s sisterly love when once she tore a piece of her sari to tie on Lord Krishna’s bleeding hand. This proved that the Rakhi festival was never meant just for blood relations, it just needs a pure gesture to celebrate this festival.

The tradition of inviting sisters on Sravan Purnima to tieing Rakhi to their brothers came to existence when Goddess Lakshmi tied Rakhi on the wrist of King Bali as she wanted to take Lord Vishnu along with him who was on a task to protect King Bali’s kingdom due to his devotion and prayers. After the king was touched by the gesture of Goddess Lakshmi’s attempt, he requested Lord Vishnu to go along with Goddess Lakshmi to Vaikuntam.