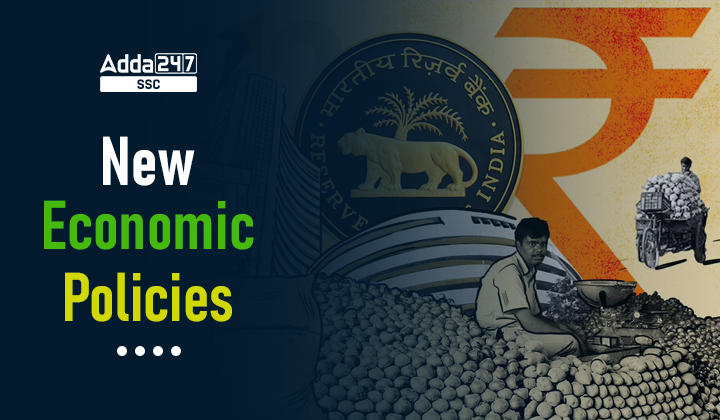 New Economic Policies 1991 marked opening up of the Indian economy. It was the time when Indian economy moved towards a market economy from the previous government controlled economy. India witnessed balance of payments crisis which forced it to seek assistance from IMF. The government thus had to introduce fundamental changes in the economic structure and approach to convert the crisis into an opportunity.

New Economic Policies 1991 was based on Liberalisation, Privatisation and Globalisation (together called as LPG).

Under Liberalisation, Indian industries were given the freedom to import capital goods and restrictive trade practices were abolished. Strict Licensing policy was liberalised in all sectors except few like defence and explosives.

Under Privatisation, many public sector undertakings (PSUs) were disinvested & sold to private players.

Under Globalization, customs and tariffs were reduced to promote export and import and attract foreign investors. The Indian currency was made partially convertible.

New Economic Policies and Its Effects

NEP 1991 proved to be a major shift in Indian economy which has far reaching effects not just limited to economic growth of the country but also on the social, political and environmental health of the country. It has been a boon and bane at the same time. Here are some visible effects of New Economic Policies.

India’s Gross Domestic Product (GDP) has been growing tremendously. India’s GDP growth rate was only 1.1 percent in 1990-91, but now is among the fastest growing major economy in last decade.

India has become a major destination for Foreign Direct Investment.

The unemployment rate was high in 1991, but since implementation of LPG strategy, more jobs were created in private sector.

Agriculture’s share of GDP has dropped dramatically to less than 20%. Farmer’s per capita income has decreased and rural indebtedness has increased. This has also increased Farmer’s suicide cases in the country.

Globalization has taken a toll on environmental health. It has increased pollution level. It has an impact on people’s health.

NEP 1991 has increased disparities within the country. Top 1% richest population holds almost half of the country’s wealth.

Q. When was New Economic Policy introduced in India?

Q. New Economic Policy is characterized by LPG. What does LPG stands for?