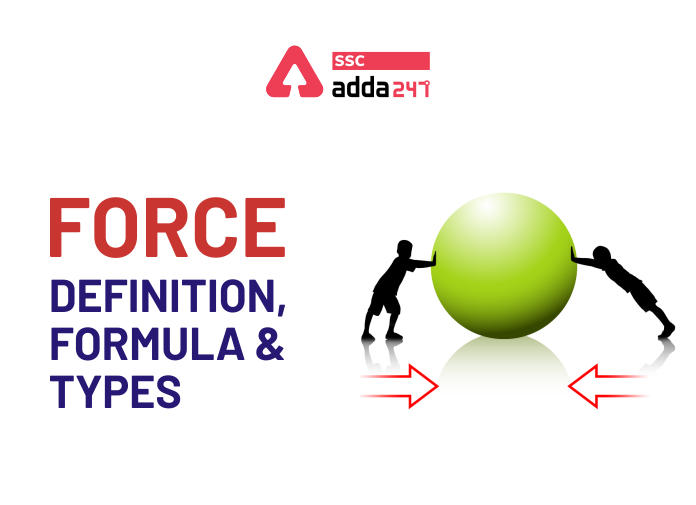 A force is an interaction of the object with mass that causes the object to change its velocity. It can be defined as the push or pull on a particular object. A force is a vector quantity which means it has both magnitude and direction. When objects interact with one another, it is likely to cause a push or pull resulting in the Force. For example, when you try to push a ball, it causes a force on the ball that changes its state of motion. The external force applied has the capability to change the position of a particular object. The direction in which the force is applied is known as the direction of Force. In this post, we will discuss everything related to Force including its Formula and Types. Check out the article below to know about Force.

The SI unit of Force is Newton(N). However, Force can also be defined in various other units as given in the table below.

Whenever a Force is applied on any object, it tends to change its shape, size, speed or direction. It changes the motion of an object. Motion is the movement of a body. Here are some of the effects that force has on its objects:

Force can be explained by the product of mass (m) and acceleration (a). The equation for the formula of Force can be expressed in the form as given below:

It is formulated in Newton (N) or Kgm/s2.

So Force can be defined as F = mv/t

Inertia formula is termed as p = mv which can also be explained as Momentum.

There are various types of Force that act on an object. Here are some of Force applied on an object generally:

Let’s take a look at the Types of Force in detail:

It can be simply defined as the force that we apply on a daily basis by the work we do such as lifting, breathing, exercising etc. It acts after coming in contact with the object. This force results due to the action of our muscles. When we use our muscles to do the daily chores, muscular force is exerted on the object.

The mechanical force occurs when there is direct contact between two objects where one object is applying the force while the other one is in a state of rest or in the state of motion. Someone pushing the door is an example of Mechanical force.

Frictional Force is the opposing force created between two surfaces whose main purpose is to create resistance to the object either moving in the same direction or opposite direction.  When we put brakes while riding a cycle act as a frictional force.

Gravitational Force is the force of attraction that attracts two objects with masses. Earth’s gravitational force pulls us to the ground. It always tries to pull the masses towards each other and never tries to push them apart. It can be defined as Newton’s Universal Law of Gravitation.

Magnetic Force is the force that arises between electrically charged particles because of their motion. Magnetic force can be seen between the poles of 2 magnets. It is attractive or repulsive in nature depending upon the orientation of the object. It can be said to be a consequence of Electrostatic Forces.