Directions (1-2): In each of the following questions, a letter-number series is given with one term missing as shown by (?). Choose the missing term out of the given alternatives.

Directions(3-4): In each of the following letters series, some of the letters are missing which are given in that order as one of the alternatives below it. Choose the correct alternative.

Q3. ab _ bcbca _ _ c _ bab
(a) acbc
(b) ccaa
(c) abcc
(d) baaa
Ans.(b)
Sol. The series is abcbc/bcaca/cabab.
Thus, the series consist of three sequences. The first sequence begins with a, the second with b and the third with c. Each sequence consists of a letter followed by the pair of other two letters repeated twice.
Q4. aa _ _ aba _ bca _ aab _ a _
(a) bbccab
(b) bbabcb
(c) bcabcb
(d) cbabac
Ans.(c)
Sol. The series is aabcab/aabcab/aabcab.
Directions(5-6): There is a certain relation between two given words on one side of : : and one word is given on another side of : : while another word is to be found from the given alternatives, having the same relation with this word as the given pair has. Select the best alternatives.

Directions (7-8): In each of the following questions, choose that set of numbers from the four alternative sets, that is similar to the given set. 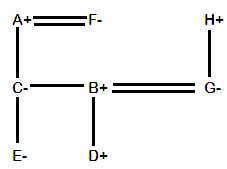 So F is the grandmother of D.

Directions (12-15): In the following figure, rectangle, square, circle and triangle represent the regions of wheat, gram, maize and rice cultivation respectively. On the basis of the above figure, answer the following questions. 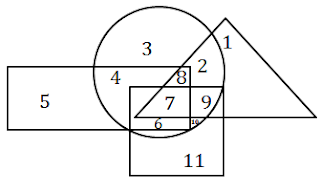