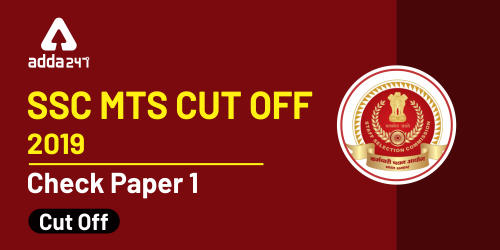 SSC MTS (Multitasking Staff) exam 2019 Paper 1 was conducted from 2nd August to 22nd August 2019. SSC MTS result for Paper I is out on 25th October 2019. What is the SSC MTS cut off 2019? How much will the SSC MTS cut off 2019 differ from that of previous years cut-off? In this article, you will get to know the SSC MTS Cut off 2019, and SSC MTS cut off state-wise list for all the categories. The SSC MTS Paper-II is scheduled on 24th November and qualified candidates should now start boosting their preparations for the same.

SSC MTS previous notification was released in 2016 and the examination was held from 16th September to 31st October 2017. The exam pattern consists of 100 questions of total marks of 150. A total number of 19,96,411 candidates appeared in the above examination. The below table depicts the category wise cut off and the candidates qualified for Paper-2.
About Course:

The candidates who qualified in Paper – I, was required to appear in Paper-II, which was conducted on 28-1-2018, in which a total of 1,43,657 candidates appeared. Paper 2 was descriptive and qualifying in nature. The Commission had decided to fix qualifying marks of 17.5 i.e. 35% for UR category and 16.5 i.e. 33% for all other reserved categories in Paper-II. Qualifying marks in Paper-II will be uniform across all States/UTs.

The SSC MTS 2014 Cut Off the state-wise list is given below. Candidates can check the cut-off and note the difference between 2014 and 2016 cut off:-

The SSC MTS Paper 2 is Descriptive. Check the SSC MTS Exam Pattern for Paper II given below:


Paper-II will only be of qualifying nature and is intended to test elementary language skills given recategorization of the post as Group-C and given job requirements.
Click Here to Check SSC MTS Detailed Exam Analysis
Check SSC MTS Updates
Click on the below link to Get A Guide To Descriptive Writing: Practice eBook

BFUHS Recruitment: All You Need To Know