Dear Aspirants,
SSC CHSL Notification 2019-20 Out: Staff Selection Commission provides a golden opportunity to the undergraduate youth of the country to excel by appearing for the SSC CHSL examination every year and get selected in various posts such as DEO, Postal Assistant, LDC and Sorting Assistant under the central government. SSC CHSL notification 2019-20 is released on 3rd December 2019 where candidates are required to appear for the CHSL 2020 Tier 1 exam from 16th to 27th March 2020. Every year, lakhs of applications are registered for the SSC CHSL exam out of which only thousands of talented aspirants get into the desired posts. The exam for SSC CHSL will be held in 2020 and hence aspirants can call it 2019-20 recruitment.

The detailed notification for SSC CHSL 2019 & CHSL 2020 exam containing all the details regarding the procedure to apply, eligibility criteria, selection process, exam pattern, syllabus, etc is uploaded on the official website on 3rd December 2019. The Application process will conclude on 10th January 2020 so aspirants will have enough time to apply for SSC CHSL Recruitment 2019-20. The official SSC CHSL Notification 2019-20 with eligibility criteria, age limit, exam date is released. Click on the link below to download Notification PDF and check whether you are eligible to apply online for SSC CHSL 2019-20.

SSC CHSL stands for Combined Higher Secondary Level (CHSL) examination conducted for the recruitment of posts that require only 12th pass as the minimum educational qualification. Candidates are eligible for the following posts under SSC CHSL:

The SSC CHSL Vacancy will give an idea about the upcoming job opportunities and the possible chances that one can get.  To depict the expected vacancy for SSC CHSL 2019, let’s have a look at last years’ vacancy. The vacancies are released by the commission later in the recruitment process.

To get a detailed overview of the posts under SSC CHSL, one must be aware of the pay scale given to the employees. Here is the salary structure for SSC CHSL posts with pay band and grade pay revised as per the 7th Pay Commission.

The minimum educational qualifications essential to be possessed by the aspirants to be eligible for SSC CHSL 2019-20 are:

Candidates need to pass through 3 Tiers to be eligible to get appointed in the SSC CHSL exam. The SSC CHSL exams will be held in 2020. The selection process has been briefly mentioned in the table given below:

Candidates must get themselves acquainted completely with the selection process to avoid any confusion in the future.

The Tier 1 exam which is a first step towards getting the selection will be held from 16th-27th March 2020 where the aspirants will face a set of 100 questions to be attempted in 60 minutes that will add up to a total of 200 marks. The subjects along with the distribution of questions have been shown in the table given below:

The SSC CHSL Online based exam includes 4 sections namely General Intelligence and Reasoning, Quantitative Ability, English Language and General Awareness. Knowing the syllabus thoroughly is the foremost thing to be done by the aspirants without any further ado. Here is the list of subject-wise topics that must be read and prepared properly.

SSC CHSL 2019 exam will come with its own set of challenges in the difficulty level of the exam. As there has been drift in the type of questions asked, one must be well aware of the SSC CHSL cut off for previous years. In SSC CHSL 2018, a total of 45101 candidates were qualified in Tier 1 to appear for the Tier 2 exam. Check the cut off given below:

The last 4 years cut off has been provided in the table given below. Take a look at the SSC CHSL cut-offs:

Previous years’ questions are important for preparing for the SSC CHSL exam in the future.

In SSC CHSL Tier-1 Exam 2018-19, the English language section was of Easy Level.

The reasoning section is always easier as compared to the other sections. Candidates can attempt 19-20 questions easily. Check out some questions:

The level of the GA section has been moderate. Some questions asked in SSC CHSL General Awareness section in previous years are given below:

SSC CHSL Admit Card will be released on 9th or 10th March 2020 as the exam will commence from 16th March 2020. Candidates must note that it is mandatory to carry your admit card to the exam center without which candidates will be barred from taking the SSC CHSL examination. One must also carry a passport size photograph along with original id proof to the center.

SSC CHSL answer key will be released by the SSC soon after the written exam and candidates can calculate their score by the SSC CHSL Answer key and raise objections.

The SSC CHSL Result will be declared soon after the answer key has been uploaded. Candidates must visit this page regularly to know about the result date of SSC CHSL exam. 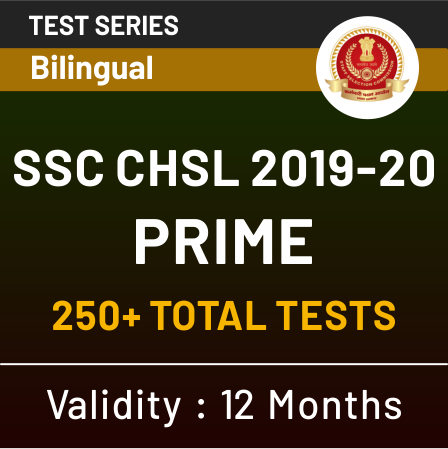