World Wetlands Day is observed every year on the 2nd of February to spread awareness on the need to conserve wetlands all over the world. The WWD was first celebrated in 1997 and every year various government organizations, students etc take part in programmes to educate people on the importance of wetlands and the necessity to raise public awareness on this issue.

What are wetlands? Wetlands are land flooded with water either permanently or seasonally inhabiting various organisms contributing to the ecosystem. Wetlands act as a natural storage reservoir, and also helps in water purification. They are also rich in biodiversity and contribute majorly to the environment. Some of the wetlands are mangroves, marshes and peatlands, floodplains and flooded forests, swamps etc. 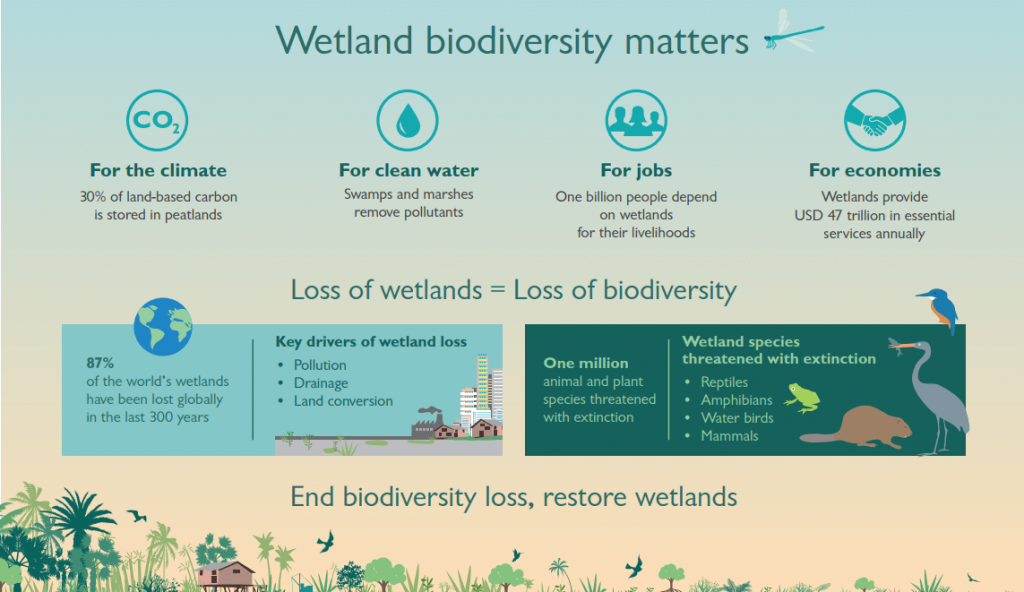 The theme for World Wetlands Day for the year 2020 is “Wetlands and Biodiversity“. The diverse nature of wetlands can be seen from the variety of plant and animal species that it inhabits. As per the latest data, 40% of all species live or breed in wetlands. Latest estimates reveal a global decline of biodiversity of wetlands, as they are disappearing 3 times faster than forests. This year’s theme has been decided to highlight wetland biodiversity, its status, why it matters and actions that can be taken to reverse its loss.

World Wetlands Day marks the signing of and adopting the Convention on importance of Wetlands held at the Ramsar Convention in Ramsar, Iran, on 2 February 1971. The convention was held to highlight the issue of conservation and sustainable use of wetlands. The first World Wetlands Day was then celebrated in 1997.

Why is there any need to conserve wetlands and how do they contribute to the environment? Here are the reasons explaining why it matters: