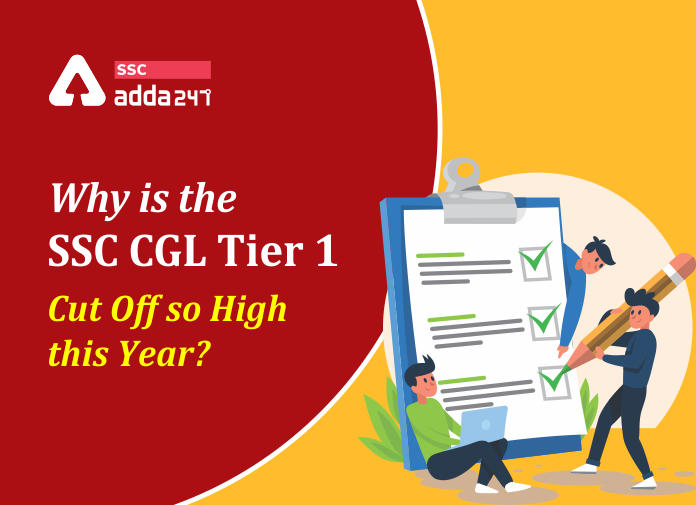 Why is the SSC CGL 2019 Tier 1 cut off so high as compared to the previous years? This question has put many aspirants in a dilemma after the release of SSC CGL Tier 1 result. The CGL 2019 Tier 1 examination was held from 3rd March to 9th March. More than 9 Lakh students appeared for the exam competing for 8,582 vacancies released by SSC tentatively. There are various reasons responsible for the increase in the cut off this year that has troubled the aspirants. Let’s discuss some important and crucial points that can be the possibility behind high Tier 1 cut off for SSC CGL.

Normalisation was a part of both years and can be said to be a crucial factor. Check out the cut off for 2018 and 2019 for all posts given below.

After the declaration of SSC CGL result, students started wondering of the reasons resulting in such high cut off marks like never before. Several reasons can be listed based on assumptions and observations. We are providing you with our analyzation and the possible reasons that acted as a deciding factor.

The number of students qualified in SSC CGL 2019 Tier 1 is 1,25,279 as compared to the 1,50,396 candidates selected in the previous year. The decline in qualified candidates is because this year, SSC has selected students for both Tier 2 and Tier 3 as per its official notice.

The candidates qualified in Tier 1 are likely to appear for tier 3 as well to minimize the recruitment process. Nearly, 25,000 less number of students were selected this year and it can be a major factor in the increase in cut off.

2. Easier exam than the previous year

According to some students, the exam was comparatively easy in many shifts as compared to the previous year. Although in some shifts, Quantitative aptitude and general awareness sections were tough, the exam difficulty level can definitely be a deciding factor in the cut off marks.

There no doubt that the competition for SSC examinations has been rapidly increasing for the past years. The number of students who appeared for SSC CGL Tier 1 examination was 9,78,103 as compared to 8,37,000 candidates appeared last year. While the number of vacancies notified by SSC for 2019 is 8,582 as compared to 11,271 vacancies notified for 2018. The decrease in vacancy and increase in the competition among aspirants must not be neglected.

Normalization has been an integral part of all SSC examinations for the past 2 years. With the exam being conducted in multiple shifts, the marks are normalized resulting in the increase of up to 40-50 marks for many students. Surprisingly, some students are even able to score more than 200 marks in Tier 1, the maximum marks for the exam. Normalization have definitely spiked the cut off marks for all exams.

We hope that this article provided a deeper insight into the possible reasons for the higher cut off marks in SSC CGL. The above points are entirely based on our views and thoughts.