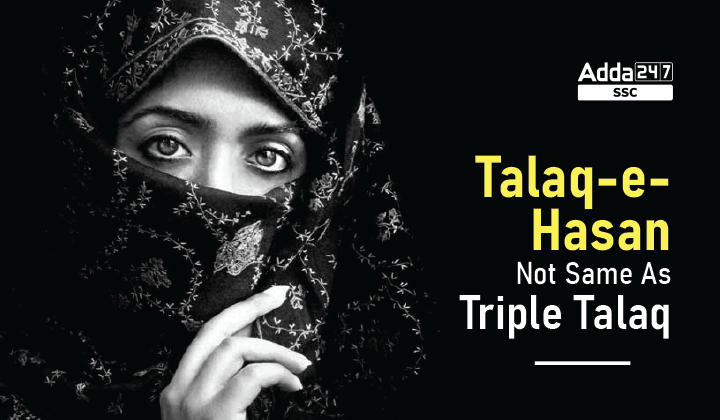 Talaq-e-Hasan Not Same As Triple Talaq: Recently, the Supreme Court has said the practice of divorce in Muslims through ‘Talaq-e-Hasan’ is not akin to triple talaq, and the Muslim women also have similar rights by the way of ‘Khula’.

In Islam, a man can take “talaq”, while a woman can part ways with her husband through “khula”.

How it is different from Triple Talaq?

Talaq-e-Hasan is pronounced once a month over a period of three months. In Talaq-e-Hasan, divorce gets formalised after the third utterance in the third month if cohabitation is not resumed during this period. However, if cohabitation resumes after the first or second utterance of talaq, the parties are assumed to have reconciled and the first or second utterances of talaq are deemed invalid.

Notably, the practice of Triple Talaq has been declared unconstitutional but  ‘Talaq-e-Hasan’ is not recognized as improper by the Supreme court as of now.

Also, if husband and wife cannot live together, the Supreme court can also grant a divorce on the ground of irretrievable breakdown under Article 142 of the Constitution.

It is argued that ‘Talaq-E-Hasan’ and other forms of unilateral extra-judicial talaq is neither harmonious with the modern principles of human rights and gender equality, nor an integral part of the Islamic faith. “Many Islamic nations have restricted such practice, while it continues to vex the Indian society in general and Muslim women.

It is said that the practice also wreaks havoc to lives of many women and their children, especially those belonging to the weaker economic sections of society.

Many also see the practice as unconstitutional, arbitrary, irrational, and violative of Articles 14, 15, 21, and 25 of the Constitution.