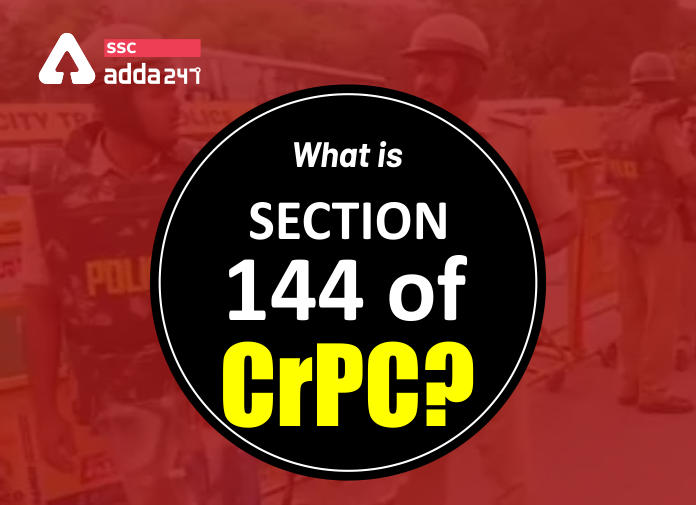 Section 144 of CrPC: Section 144 of the Criminal Procedure Code (CrPC) was enacted in the year 1973. This law empowers the magistrate of any state or union territory in India to pass an order prohibiting the gathering of four or more people in a specified area. The various provisions of Section 144 makes it possible to book all the members of such gathering termed as ‘unlawful assembly’ under the charges of having engaged in rioting. Govt. imposed section 144 in various states and cities during the initial outburst of the coronavirus to stop the spreading of the virus. Let’s take a look at the section 144 in detail.

118 More Mobile Apps Including PUBG Banned by the Government

Section 144 of the Code Of Criminal Procedure (CrPC) allows the state to issue orders restricting the gathering of people in the wake of emergency situations. When section 144 is imposed in a city, district or state, it prohibits the assembly of more than 5 people in an area. The section 144 was enacted in 1973. Under this section, all places with public gatherings such as schools, colleges, malls etc are closed. Amidst Coronavirus scare, section 144 has been imposed as a preventive measure to control the spread of this contagious disease. Currently, many states such as Delhi, Maharashtra, Haryana, some districts of Uttar Pradesh have already imposed section 144 of CrPC.

People gathering in masses have the potential risk of spreading the coronavirus epidemic. In order to avoid the contagious spread, section 144 is necessary to be imposed in the states. The risk of the virus spreading exponentially across the communities is huge and in order to flatten the curve, it has become mandatory to take some severe steps such as banning the gathering of individuals. Under this section, people can also be booked for violating the rules and engaging in unlawful activities.

As the situation is becoming worse, many states have declared complete lockdown where only the essential services will remain open. Under lockdown, people are confined in their homes and not allowed to leave the area. Citizens are advised to stay at their homes to avoid the virus from spreading further. Guidelines to maintain law and order have already been issued to the states by the Central Government.

What powers does the administration have under the provision?

The magistrate can direct any person to abstain from a certain act or to take a certain order with respect to certain property in his possession or under his management. This usually includes restrictions on movement, carrying arms and from assembling unlawfully. It is generally believed that assembly of five or more people is prohibited under Section 144.

Section 144 also places restrictions on handling or transporting any kind of weapon in the given jurisdiction where Section 144 has been imposed. In case of any violation in this regard, people doing it in any form can be detained. Such acts can invite a punishment of three years. As per the order issued under this section, there cannot be any movement of the public. All educational institutions in the given area will have to remain closed. Holding any public meeting or conducting rallies in the area are banned during the period when Section 144 is in force.

In the areas where Section 144 is in force, it is deemed a punishable offence to obstruct law enforcement agencies from disbanding an unlawful assembly. In case of any arising need, Section 144 also empowers the authorities to stop internet access in the region. The ultimate purpose of Section 144 is to maintain peace and order in the areas where trouble could erupt to disrupt the regular life. 144 CrPC prohibits the conducting of some events which are otherwise allowed during regular times.

What Is the Epidemic Diseases Act 1897? Know About It

As per the rules specified for the implementation of Section 144 in a given jurisdiction, no order can remain in force for a period of more than 2 months. Under the state government’s discretion, it can choose to extend the validity for two more months with the maximum validity extendable to six months. Once the situation becomes normal, Section 144 levied can be withdrawn.