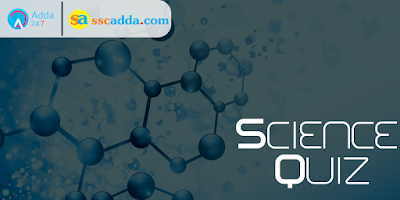 We are providing the mix quiz on Chemistry/Biology/Physics. From this section you will get at least 7-8 questions in SSC CGL Exam. So from this quiz one can prepare general science section on daily basis.

Q2. The release of which one of the following into ponds and wells helps in controlling the mosquitoes?
(a) Crab
(b) Dogfish
(c) Gambusia fish
(d) Snail

Q3. In which one of the following kinds of organisms is the phenomenon found wherein the female kills the male after copulation?
(a) Dragon fly
(b) Honeybee
(c) Spider
(d) Pit viper

Q4. In human beings, normally in which one of the following parts, does the sperm fertilise the ovum?
(a) Cervix
(b) Fallopian tube
(c) Lower part of uterus
(d) Upper part of uterus

Q5. Production of which one of the following is a function of the liver?
(a) Lipase
(b) Urea
(c) Mucus
(d) Hydrochloric acid

Q7. Which of the following diseases can be transmitted from one person to another through tattooing?
1. Chikungunya
2. Hepatitis-B
3. HIV-AIDS
Select the correct answer using the codes given below
(a) Only 1
(b) 2 and 3
(c) 1 and 3
(d) All of these

Q8. In which organ of the human body, are the lymphocyte cells formed?
(a) Liver
(b) Long bone
(c) Pancreas
(d) Spleen

Q9. Foot and mouth disease in animals, a current epidemic in some parts of the world, is caused by
(a) bacterium
(b) fungus
(c) protozoan
(d) virus

Q10. Athlete’s foot is a disease caused by
(a) Bacteria
(b) Fungus
(c) Protozoan
(d) Nematode

Q11. Improper handling and storage of cereal grains and oilseeds result in the production of toxins known as aflatoxins, which are not generally destroyed by the normal cooking process? Aflatoxins are produced by
(a) bacteria
(b) protozoa
(c) moulds
(d) viruses

Q12. Epiphytes are plants which depend on other plants for
(a) food
(b) mechanical support
(c) shade
(d) water

Q13. Which one of the following organisms can serve as a biofertilizer for rice crop?
(a) Blue-green algae
(b) Rhizobium sp
(c) Mycorrhizal fungi
(d) Azotobacter sp