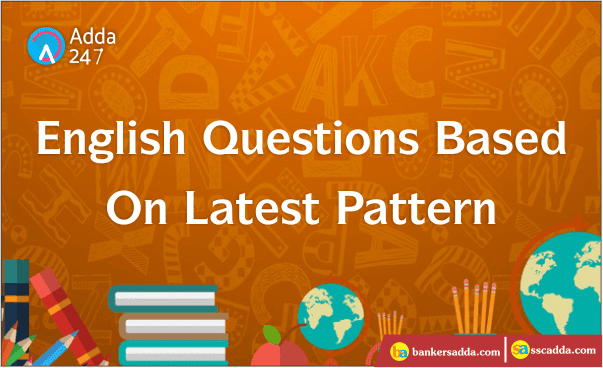 Be a part of this revised study plan, visit SSCADDA website regularly to add up each day effort in your practice. SSC CGL and CPO Exam dates can surprise you anytime soon. It is time to knuckle down to get your dream job, Today, in this English quiz we are providing 15 Idioms and Phrases questions. Attempt this quiz and prepare yourself flawlessly. We wish you good luck for the upcoming Exams.

Directions (1-5) A passage is given with 5 questions following it. Read the passage carefully and choose the best answer to each question out of the four alternatives and click the button corresponding to it.

The function of education is to prepare young people to understand the whole process of life. The end of education is not merely to pass some examinations and get a job and earn one’s livelihood. If education is to make people understand life, then surely life is not merely a job or an occupation; life is something extraordinarily wide and profound, it is a great mystery, a vast realm in which we function as human beings. If we prepare ourselves only to earn a livelihood, we shall miss the whole point of life. To understand life is much more important than to get a degree or pass an examination for a job. Life, with all its subtleties, is such a vast expanse. It has its extraordinary beauty, its sorrows and joys. It also has its hidden things of the mind such as envies, ambitions, passions, fears, fulfilments and anxieties. The birds, the flowers, the flourishing trees, the heavens, the stars, the rivers and the fishes therein – all this is life. When we are young we must seek and find out what life is all about. Thus we cultivate intelligence with the help of education. Intelligence is the capacity to think freely, without fear, without a formula, so that we begin to discover for ourselves what is real and what is true. Anyone who is gripped with fear will never be intelligent. Most of us have fear in one form or another. Where there is fear there is no intelligence. Thus what education should do is help us understand the need of freedom. Unless we are free we will not understand the whole process of living. When we are free we have no fear. We do not imitate but we discover.

Q1. What is the effect of fear on humans?
(a) we understand life’s great mystery.
(b) we are not able to develop our intelligence.
(c) we think freely.
(d) we see the vast expanse of life.

Directions (6-10): A passage is given with 5 questions following it. Read the passage carefully and choose the best answer to each question out of the four alternatives and click the button corresponding to it.
The Alaska pipeline starts at the frozen edge of the Arctic Ocean. It stretches southward across the largest and northernmost state in the United States, ending at a remote ice-free seaport village nearly 800 miles from where it begins. It is massive in size and extremely complicated to operate. The steel pipe crosses windswept plains and endless miles of delicate tundra that tops the frozen ground. It weaves through crooked canyons, climbs sheer mountains, plunges over rocky crags, makes its way through thick forests, and passes over or under hundreds of rivers and streams. The pipe is 4 feet in diameter, and up to 2 million barrels (or 84 million gallons) of crude oil can be pumped through it daily. Resting on H-shaped steel racks called “bents”, long sections of the pipeline follow a zigzag course high above the frozen earth. Other long sections drop out of sight beneath spongy or rocky ground and return to the surface later on. The pattern of the pipeline’s up-and-down route is determined by the often harsh demands of the arctic and subarctic climate, the tortuous lay of the land, and the varied compositions of soil, rock, or permafrost (permanently frozen ground). A little more than half of the pipeline is elevated above the ground. The remainder is buried anywhere from 3 to 12 feet, depending largely upon the type of terrain and the properties of the soil. One of the largest in the world, the pipeline cost approximately $8 billion and is by far the biggest and most expensive construction project ever undertaken by private industry. In fact, no single business could raise that much money, so 8 major oil companies formed a consortium in order to share the costs. Each company controlled oil rights to particular shares of land in the oil fields and paid into the pipeline-construction fund according to the size of its holdings. Today, despite enormous problems of climate, supply shortage, equipment breakdowns, labour disagreements, treacherous terrain, a certain amount of mismanagement, and even theft, the Alaska pipeline has been completed and is operating.

Q6. The Alaskan pipeline ends
(a) north of Alaska
(b) at a seaport village
(c) after passing through canyons and rivers
(d) at a tundra covered village

Q8. What are “bents”
(a) Zigzag shape of pipeline
(b) Pipeline’s up and down route
(c) The section of the pipeline that drops out of sight
(d) The H-shaped steel racks

Q10. Which of the following were not problems faced while constructing the pipeline?
(a) Supply shortages
(b) Treacherous terrain
(c) Lack of funds
(d) Equipment breakdown

Worry is a very common thing. Even children worry as much as grown up people. In his childhood, the writer used to fear that his parents would die suddenly at night. His fear and anxiety was just imaginary. When he was on the war front in Mesopotamia, the writer came to a certain conclusion on worrying. He was a subaltern officer. It was not his duty to plan future actions of war. He was there only to carry out what the superiors would decide. So it was useless to worry. When he took that stand he slept soundly without worry. Here, the writer had some real reason to worry. But he could get rid of it when he found it was useless to worry. He followed the same principle when he was a prisoner of war and he was in Asiatic Turkey. There, too, he banished his worries because nothing of his future depended on himself. The future of the prisoners of war would depend on the various governments. Thus he was able to live there without much worry though he was a prisoner.

But his deliberate suppression of worry during the war and as a prisoner did not wholly eradicate his worries. The fear had gone to his subconscious mind and remained there buried. After the war the writer was at home. But whenever a member of his family was absent he feared all sorts of mishap happening to him or her. Moreover, he had a recurring nightmare that he had become a prisoner of war and the war was not going to end. The worries without any real cause here were the manifestations of the fears that he had banished deliberately earlier.

Q11. Why was the writer able to live in jail without much worry?
(a) Because nothing of his future depended on himself
(b) He was comfortable in jail
(c) Because he was a prisoner of war
(d) Because worry is a common thing