Q1. Which letter in the word AGREEMENT occupies the same position as it does in the English alphabet?
(a) M
(b) E
(c) N
(d) G

Q2. In this letter series, some of the letters are missing which are given in that order as one of the alternatives below it. Choose the correct alternative.
A _ BCCB _ CA _ CCA _ BAAB _ C
(a) ACCAB
(b) ABCAA
(c) ABABC
(d) BACAA

Q6. A series is given, with one term missing. Choose the correct alternative from the given ones that will complete the series.
NOA, PQB, ? , TUD
(a) QUE
(b) QVF
(c) RSC
(d) RTE

Q8.  Arrange the given words in the alphabetical order and tick the one that comes second last.
(a) External
(b) Extraordinary
(c) Extraction
(d) Extra

Q9. If the letters in the word UNDERTAKING are rearranged in the alphabetical order, which one will be on 9th position from left after the rearrangement?
(a) G
(b) R
(c) T
(d) N

Directions (10): In this question, some symbols are represented by letters as shown below:
Now, identify the correct expression in each case.

Q12. Find out the number of triangles in the figure? 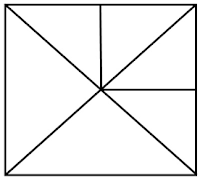 Q14. Work is related to Joule in the same way as Luminous intensity is related to?
(a) Newton
(b) Metre
(c) Candela
(d) ohm

S1. Ans.(b)
Sol. E is the 5th letter in the word as well as in the English alphabet.

S2. Ans.(c)
Sol. The series is AABCC/BBCAA/CCABB/AABCC. Thus the letters move in a cyclic order and in each group, the middle letter occurs only once.

S3. Ans.(d)
Sol. Except TS, there is a difference of 2 between letters.