Q1. Find Out the missing term from the given alternatives? 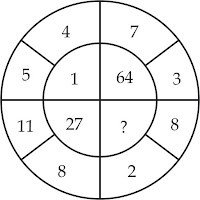 Q3. In this question, choose one word which can be formed from the letters of the given word
COMMEMORATION
(a) CONTINUE
(b) COMMON
(c) CONSTANCE
(d) CONTENT

Q9.How many triangles are there in the following figure?

Q10.A piece of paper is folded and cut as shown below in the question figure. From the given answer figures, indicate how it will appear when opened.

Q14.In each of the following letter series, some of the letters are missing which are given in that order as one of the alternatives below it. Choose the correct alternative.
a __ bbbc __ aab __ bcca __ __ bbcc
(a) bacbb
(b) acbab
(c) abbab
(d) cabab